Unecumenism and the Sins of All 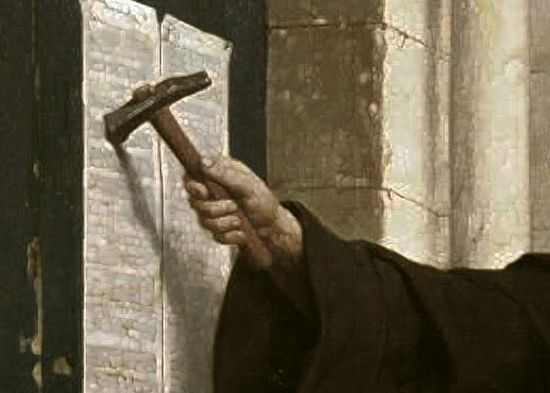 The concept of the One Church shifted during the Reformation. I offer a case in point as well as a reflection on how it changes our current understanding.

The old Anglican Book of Common Prayeroffers one of the early examples of a subtle shift in Christian thinking and speech. In the Thanksgiving after Communion we read:

Almighty and everliving God, we most heartily thank thee for that thou dost feed us, in these holy mysteries, with the spiritual food of the most precious Body and Blood of thy Son our Savior Jesus Christ; and dost assure us thereby of thy favor and goodness towards us; and that we are very members incorporate in themystical body of thy Son, the blessed company of all faithful people…

Here we have the context for a new meaning of the “one Church.” Thomas Cranmer wrote this prayer for his first prayer book (1549), and it has continued its presence in subsequent versions. Like all of Cranmer’s prose, it is a thing of beauty. But Archbishop Cranmer would need to answer some serious questions:

The fact is, Cranmer would have excluded them. They were not “faithful” people, because they held to the Catholic faith. He would have been more kindly affectioned to Lutherans, Calvinists and Zwinglians, but in typical Cranmerian fashion, a very vague, undefined phrase of piety filled the space of the prayer and left certain questions to go begging.

But we must ask further questions: What constitutes being “faithful”? Is there a least common denominator for Christians that makes them faithful? Would the word have a different meaning than when it is used in the marriage service where a husband promises to be “faithful” to his wife? 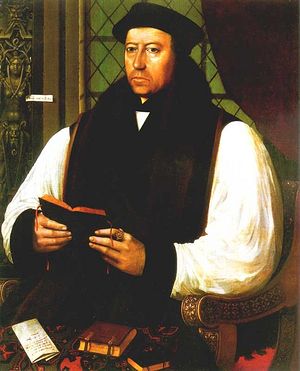 Thomas Cranmer
For Cranmer, historical evidence suggests that “faithful people” did not included “Papists.” It was a generic term used to suggest that some group of people known only to God were “the faithful.” But for the first time, this collection is abstracted from the actual, historical manifestation of the Church. In that sense, the gathering of those on earth, was perhaps not “the Church” in the sense that the word was used prior to Cranmer. Cranmer’s beautiful prayers presented a sanitized version of the rebellion and mayhem that was actually taking place within the kingdom. For the work of Henry VIII and Cranmer was not a spiritual work. It was political, financial and violent. Cranmer served his king well.

What was Christianity in England before Cranmer? From its earliest days, “Church” had a pretty clear meaning. There was only one. Though Celtic Christians in the north had been missionized quite early and were often out of contact with Christians on the continent, they nevertheless did not think of themselves as part of a “Celtic Church.” When St. Augustine was sent by St. Gregory the Great in 597, he established the Church among the Anglo-Saxons, under the authority of the Bishop of Rome. Eventually, that Roman Church (in communion with the Orthodox of the East) met in council with the Celtic Christians (the Council of Whitby, 663 a.d.) and worked out differences between them. They all understood that there could not be two Churches in Britain. The crisis had arisen precisely because the Church could only be one.

A good example of the unity of the English Church can be seen in the appointment of the eighth Archbishop of Canterbury some 71 years after St. Augustine’s arrival. Bishop Valerian of Rome sent a Byzantine Greek monk, St. Theodore of Tarsus, to fill the see of Canterbury. He became responsible for the reform and organization of the English Church. Prior to Augustine’s time in England, three bishops from Britain were in attendance at the Council of Nicaea. The One Church extended from Britain across the European Mediterranean world, Africa and deep into the Middle East. It was the One Church – one faith, one practice, one teaching, one mind. And the life of the One Church was universally expressed in the unity of her sacraments. Communion was not an act of hospitality, but itself the manifestation of the One life of Christ in His One Body.

That unity was shattered in the 11th century in the Great Schism between the Church in the East and the Bishop of Rome. This schism continues today. But both understood, then and now, that the Church can only be one.

But with Cranmer, and the other reformers, something new was set forth. There simply was no longer an expectation of the One Church. There were no particular efforts to form a single Protestant or Reformed Church. Something fundamentally new came into the world. It used all of the language of the One Church, but gave new meaning or subtle shifts of usage. Cranmer can speak of the “blessed company of all faithful people,” and get away with it. His language was so generic that to dismiss it seems an affront to all faithful people. But it is also so generic that it defies any particular meaning.

The One Church had always known what “faithful” meant. It meant to accept without reservation the one faith of the one Church and to live in conformity with her canons and teachings. This was the ship of salvation established by Christ.

Charles Taylor notes that with the coming of the Reformation, the Church is no longer the ship of salvation, but rather a collection of row boats.

My contention in these articles is to point to these fundamental changes in meaning. You cannot claim to rightly interpret the Scriptures if the words are no longer allowed to mean what they meant without interruption for 1500 years. If the Church is the blessed company of all faithful people, then they may be recognized by their visible communion in the one life of the one visible Church. And the One Church never meant anything other than this.

I do not write in order to scold people from a triumphalist position of historic Orthodoxy. I write in order to draw attention to what Fr. Georges Florovsky called the “tragedy” of the West. That tragedy is not just found in the schism that split the Catholic Church from the Orthodox. It is even more profoundly encountered in the continuing fragmentation and atomization of Western Christianity in general. To speak of the unity of an invisible Church is make-believe, and one which seeks to obscure the true tragedy in which we live.

The fragmentation and atomization of Christianity has also contributed to the growth of radical individualism and the psychologization of our culture. Just as the unity of the Church has become an abstraction, at best a psychological moment of sentiment, so, too, the unity of our humanity has become nothing more than a slogan. When classic teachings of the Orthodox Christian faith that are rooted in the true spiritual and organic unity of mankind are presented, modern Christians are confused and reject them.

An excellent example is the simple assertion that each individual person has a share and participates in the sins of every human person. “Each man is guilty of the sins of the whole world,” in the words of Dostoevsky. This profound reality lies at the very heart of the classical Christian faith. It is only because it is true that Christ could take upon Himself the sins of all. Our union with Him as we are Baptized into His death, as we are daily crucified with Him, receives its meaning and reality from this fundamental Christian understanding.

But modernity has removed such solidarity from its consideration. Every man is an island, with a personal, i.e., “private,” Savior. Church is whatever he wants it to be while at the same time he insists that “we are one.”

Orthodox Christianity is not a denomination. It is not a church among churches. (Indeed, I defy anyone to describe it as “organized religion.”) It is the union of humanity with the Crucified Christ through history. The one faith of the Orthodox has been maintained through history. Modern Christians may not realize or understand the sacrifice of love that this represents nor the great ascetic effort involved in maintaining the “unity of the Spirit in the bond of peace.” It continues to be a great struggle.

In the modern model, such a true union would have been abandoned long ago and justified by announcing, “We are one.”

Classical Christianity is a marriage, a true union. It is not maintained in its One existence by the casual treatment of denominationalism. The modern charges that “you are just one of us,” seeks to deny the sacrifice of the centuries and even deny that such union is possible. But Orthodox union of life is a witness to the Apostolic faith:

Now I plead with you, brethren, by the name of our Lord Jesus Christ, that you all speak the same thing, and that there be no divisions among you, but that you be perfectly joined together in the same mind and in the same judgment. (1Co 1:10)

Finally, brethren, farewell. Become complete. Be of good comfort, be of one mind, live in peace; and the God of love and peace will be with you. (2Co 13:11)

And here is the great mystery. Although all Christians do not have union in the One Cup, we at least have union in our sins. And in our sins we have union with Christ, who became sin that we might become the righteousness of God. And it is perhaps there that we shall all be saved:

But if we walk in the light as He is in the light, we have communion with one another, and the blood of Jesus Christ His Son cleanses us from all sin. But if we say that we have no sin, we deceive ourselves, and the truth is not in us. (1Jo 1:7-8)

Consequences of the One Church – Unecumenism
Fr. Stephen Freeman
Put yourself in the fourth century. There is only one Church, and that Church is One. The Moral Path of Being
Fr. Stephen Freeman
If Christian morality is not a legal or forensic matter, how are we to think about moral behavior? Does the word have no use for Orthodox Christians? What do we think about when we confess our sins?
Comments

This passage in particular is very powerful to me-

"The fragmentation and atomization of Christianity has also contributed to the growth of radical individualism and the psychologization of our culture. Just as the unity of the Church has become an abstraction, at best a psychological moment of sentiment, so, too, the unity of our humanity has become nothing more than a slogan. When classic teachings of the Orthodox Christian faith that are rooted in the true spiritual and organic unity of mankind are presented, modern Christians are confused and reject them.

An excellent example is the simple assertion that each individual person has a share and participates in the sins of every human person. “Each man is guilty of the sins of the whole world,” in the words of Dostoevsky. This profound reality lies at the very heart of the classical Christian faith. It is only because it is true that Christ could take upon Himself the sins of all. Our union with Him as we are Baptized into His death, as we are daily crucified with Him, receives its meaning and reality from this fundamental Christian understanding."
×