A vicar clearing out a cupboard at his church found a forgotten first edition King James Bible dating back to 1611.

The Reverend Dr Jason Bray stumbled upon it as he was taking stock at St Giles Parish Church in Wrexham town centre.

It turned out to be a historic find as there are believed to be fewer than 200 such Bibles still in existence. 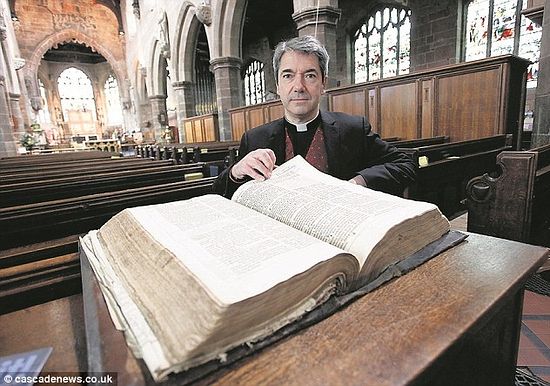 
Dr Bray said: 'We basically found it when we were going through the cupboards.

'We didn't know it was a first edition, but we sent photographs to the National Library of Wales and they confirmed that it was, dating back to 1611.

'It has been authenticated, and as far as we know, has always been here.'

He added: 'King James wanted everybody to use the same Bible and have it put in all the churches. What he was trying to do was create some sort of uniformity.'

It is also an incredibly rare artefact, with fewer than 200 first edition copies thought to be in existence.

It was printed in London by Robert Barker, printers to King James I, who commissioned the Bible's translation at Hampton Court in 1604.

Known as the Authorised Version (AV) of the Bible in English, the King James Bible was the third Bible to be translated into English and officially approved by the Church, putting together a number of translations agreed on by scholars working in Westminster, Oxford and Cambridge.

It went on to become the internationally accepted and authorised version of the Bible in English, although parts of the Bible were first translated into English by William Tyndale and published nearly 100 years earlier. 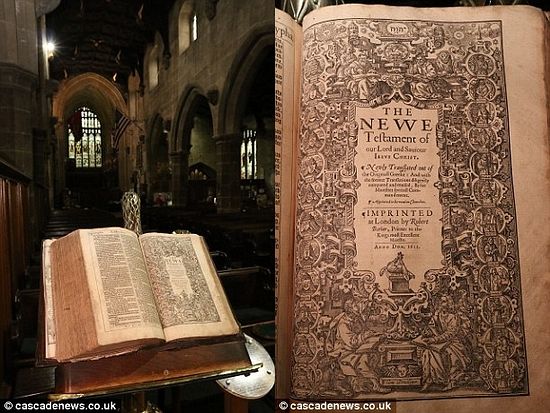 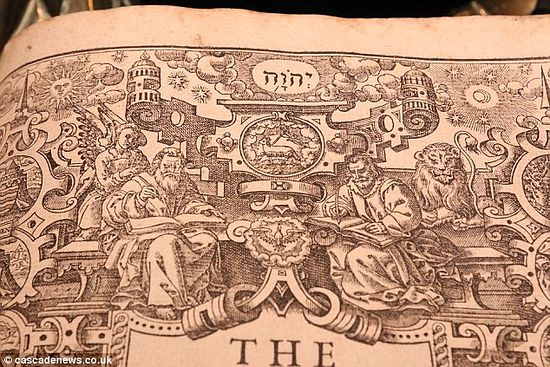 It was printed in London by Robert Barker, printers to King James I, who commissioned the Bible's translation at Hampton Court in 1604

But it is otherwise in good condition and the text is still legible due to the use of woven paper, which has a low acid content.

A similar copy found in Great St Mary's at Cambridge University in 2011, also a first edition, was valued at several thousand pounds.

Dr Bray, who has been at St Giles Church since April, said he read Alfred Palmer's The History of the Parish Church of Wrexham and decided to go looking for some of the items mentioned as being in the church's collection.

He added he was unable to guess at the value of the Bible.

'I have absolutely no idea of its value. I don't know how many there are in existence and you can buy pages on the internet for about £500 each.

'It's not absolutely complete, but it's not far off.'

Dr Bray is now keen to see the church's first edition given a proper storage and display space.

'We're keeping it safe at the moment, but we would like to have somewhere to display it – but to do that, we'll need money.' Oldest Bible to be Displayed at British Museum The Bible will be translated into modern Russian language