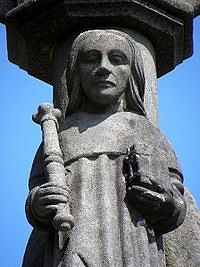 A sculpture of St. Melor in Locmelar, Brittany
Unfortunately, no authentic information on St. Melor (also Melorius, Mylor) survives. We know neither when nor where he lived. The only thing we can say for sure is that his life was connected with Brittany and/or Cornwall, and the most important center of his veneration for many years from the tenth century was the English town of Amesbury in the county of Wiltshire (southern England).

There is a late medieval and legendary Life of St. Melor. According to this, Melor was a prince in Brittany and lived in the sixth century. When the child prince was about seven years old, his uncle called Riwal (another form of the name: Rivoldus) killed the saintly King Milio, Melor’s father, hoping to seize power. The wicked Riwal wanted to murder the little prince as well, but at the last moment decided only to mutilate him. On the order of Riwal, Melor’s right hand and left foot were cut off and replaced with artificial limbs: a silver “hand” and a bronze “foot”. The boy was sent to study at a remote monastery in Quimper (Brittany). At the monastery the artificial hand and foot miraculously began to grow together with the boy. Another seven years passed; when Riwal learned about the miracle, in a fit of anger he ordered Melor to be beheaded. Riwal touched the severed head of the saint and died three days later. From that time on the veneration of Melor as a holy martyr and passion-bearer began. St. Melor was buried at Lanmeur in the Finistere department of France.

Later, in about the year 979, the relics of Melor were brought over to towns in Britain. In the Wiltshire town of Amesbury a miracle occurred: When it was time to take the relics, which were placed on the altar of the local church, and take them to another town, the relics became immovable and nobody could take or move them. In this way the martyr of God showed his will, and the people had to obey it. Thus, his relics were kept in that church for many years from that day on. Such is the legend. In any case, in the same year a new convent was founded in Amesbury and dedicated to the Mother of God and St. Melor. Melor became the patron-saint of that convent, numerous pilgrims flocked to his shrine and thanks to him Amesbury became one of the most famous and important convents in the whole of England early in the second millennium.

Whatever the fragments of truth that this legend may contain, judging by the large number of places and toponyms in honor of St. Melor that appeared in Cornwall and Brittany even earlier than tenth century, we can assert that the people in these regions venerated St. Melor from an early period. A number of settlements and parishes of Brittany bear the name of St. Melor to this day. Thus, the parish of Locmellar (“Melor’s hermitage”) in the Finistere departement of Brittany is named after the saint. The parish of Saint-Meloir-des-Ondes in the Ille-et-Vilaine Departement in eastern Brittany is named after him as well. In the eleventh century, monks from the famous Mont-Saint-Michel Monastery (the monastery at “the Holy Archangel Michael’s Mount”, an islet in north-western France and a great holy site) established a monastery there in memory of St. Melor. 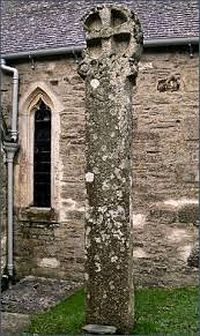 Ancient cross at churchyard of the Mylor Churchtown church
Several places in Cornwall bear the name of St. Melor, and it is supposed that a portion of his relics was once kept in this region. There is a church dedicated to St. Melor in the Cornish village of Mylor Churchtown (“the church enclosure of St. Melor”) in the Mylor parish situated in the tidal area known as Mylor Creek. It was last partly rebuilt in the 1870s, but its earliest parts date back to the Norman period. The churchyard here has a unique relic—the largest cross in the whole of Cornwall (some ten feet high). This ancient cross was discovered in the nineteenth century. Most of it was buried for many centuries and only a part of the shaft in the form of a pole could be seen. There is an opinion that this cross originally stood on the grave of St. Melor (obviously it was another saint with the same name of whom nothing is known). There are also a parish church and a holy well dedicated to St. Melor in the village of Linkinhorne in eastern Cornwall. The church was built of granite in the fifteenth century, and its tower is some 120 feet high. Among its treasures are a medieval altar stone, a thirteenth-century font and fifteenth-century wall-paintings. 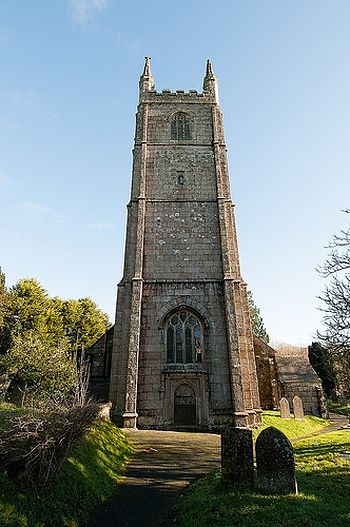 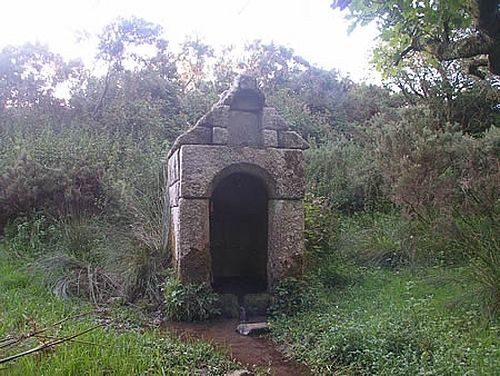 Most probably, King Aethelstan of England (ruled from 924 till 939) organized the translation of relics of a number of saints from France to England. It is likely that portions of the relics of St. Melor were thus brought to the monasteries of Amesbury and Milton Abbas (Dorset). As for Amesbury, there may have been an early English (or “Saxon”) monastery there even before the tenth century. But according to tradition, in the year 979 Queen Elfreda, stepmother of the Holy Martyr Edward of England, who took part in Edward’s murder, founded a new convent in Amesbury as a sign of her repentance for the crime. And it was there that the relics of St. Melor were translated. In the eleventh century this convent already owned much land and for many centuries it remained a popular pilgrimage site.

In 1177, King Henry II (ruled from 1154 till 1189) abolished the convent and soon after that a new priory was founded on the same site. This belonged to the French Catholic monastic order of Fontevrault. The convent throughout its history had close connections with the royal family. In 1285 Princess Mary of Woodstock (1278-1332), one of the daughters of King Edward I, became a nun in this convent where she lived for the rest of her life. Soon after Mary’s departure to the convent, her grandmother, Eleanor of Provence (1223-1291), the former queen consort and widow of King Henry III, in about 1287 entered this priory, where she stayed until her death. She was buried on the territory of the church, though the exact site of her grave is unknown. Later the monastic church in Amesbury was used as a parish church, and in all probability it saved this church from destruction during the Reformation organized by Henry VIII in the sixteenth century. 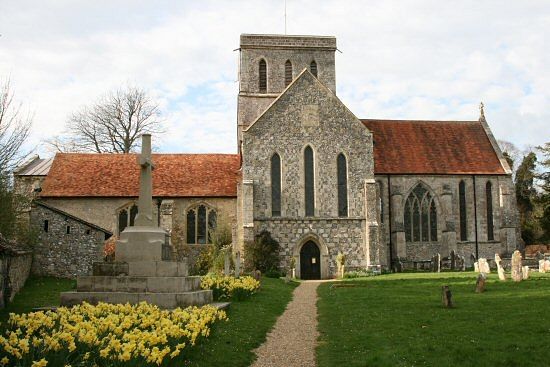 Church of Sts. Mary and Melor in Amesbury, Wiltshire 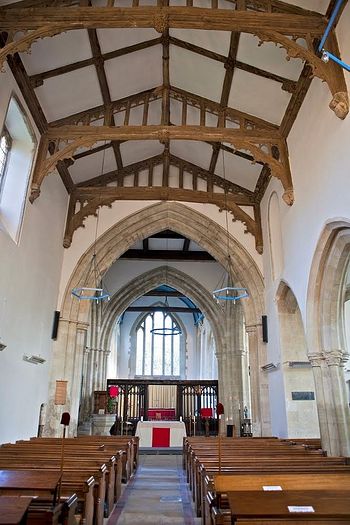 Interior of the Church of Sts. Mary and Melor in Amesbury, Wiltshire 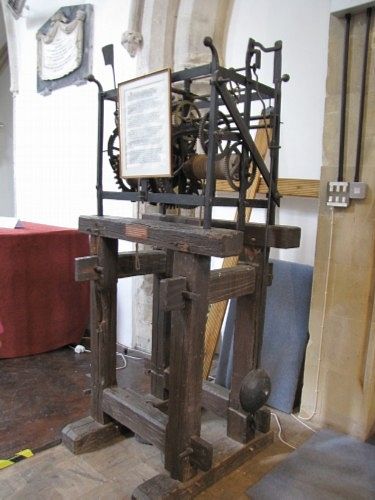 Today Amesbury is an attractive town with a population of 28,000. The ancient church of Sts. Mary and Melor stands in the town to this day. Relics of St. Melor may still rest under the floor of this church. The church nave is Norman and dates back to the twelfth century. The north transept houses the so-called Amesbury clock—a unique fifteenth-century clock which is one of the earliest in England. A part of a tenth-century “Saxon” (early English) cross is kept in this church and displayed for pilgrims. The church also has a Saxon font dating to the period of the monastic foundation. Amesbury Priory in the thirteenth century produced a very beautiful Psalter, known as “the Amesbury Psalter”, which is now kept in the library of All Souls College in Oxford. The present church is still under the patronage of St. George’s Chapel in Windsor.

Holy Martyr Melor, pray to God for us!

Holy Hierarch Kentigern (Mungo) of Strathclyde, Bishop of Glasgow, Wonderworker
Commemorated January 13/26
Dmitry Lapa
St. Kentigern was much loved and venerated by the people for his gift of working miracles. Once he brought back to life a tame robin of St. Serf, which had been killed by jealous monks. Another time he miraculously lit a fire in St. Serf's monastery, which had earlier gone out. On the Feast of St. Edmund, King and Martyr
Commemorated November 20/December 3

On the Feast of St. Edmund, King and Martyr
Commemorated November 20/December 3
Indeed, spiritual progress can only be made through the Cross, through sacrifice. Wherever there is no sacrifice, there the Church becomes a mere institution, a ritual, an empty form. But where there is sacrifice, martyrdom, the Cross, there is spiritual life.