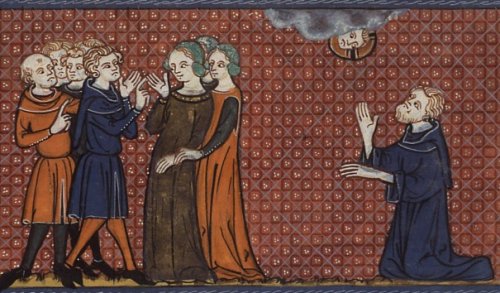 Pelgaia among her courtesans, as St Nonnus prays for her (14th-century MS)

Pelagia was a repentant sinner. She was born to pagan parents in Antioch, and was endowed by God with great physical beauty. Pelagia used her beauty to the destruction of her own soul and those of others. She became very wealthy as a result of her prostitution. Once, while walking past the Church of the Holy Martyr Julian, in which Bishop Nonnus was preaching, she stopped in and heard a sermon on the Dread Judgment and the punishment of sinners. Those words so shook her and changed her that she immediately felt revulsion for herself, acquired true fear of God, repented of all her sins and fell down before St. Nonnus with the plea that he baptize her: ``Have mercy on me, a sinner, holy Father. Baptize me and teach me repentance-I am a sea of iniquity, an abyss of destruction, a net and weapon of the devil.'' Thus this penitent begged the hierarch of Christ with tears, and he baptized her. At her baptism, Blessed Romana, the deaconess of the church, was her godmother. Romana, as her spiritual mother, grounded her well in the Christian Faith. But Pelagia was not satisfied with baptism alone. She was keenly aware of the multitude of her sins and, pricked by her conscience, decided on a great ascetic labor. She left her enormous, sinfully gained wealth to the poor, and secretly went to Jerusalem as the monk Pelagius. There, she shut herself up in a cell on the Mount of Olives, and began the difficult ascesis of fasting, prayer and all-night vigils. After three years, St. Nonnus's deacon, James, visited her and found her still alive, but when he visited her again several days later, he found that she had reposed, and he honorably buried her body. St. Pelagia entered into rest in about the year 461. Thus, this formerly terrible sinner pleased God by her repentance and labor, was forgiven of her sins, and became sanctified. And her purified and enlightened soul was deemed worthy of the Kingdom of God.

HYMN OF PRAISE
The Venerable Pelagia

Pelagia the sinner repented,
And with knowledge of the true Faith, illumined her soul.
The world beckoned her, the world enticed her, but she hearkened not.
Her conscience was awakened, her soul began to shine.
How much effort she applied, how many struggles
She endured, wrestling with her sinful body-
Itself like a decaying apple.
So much effort, so much suffering she invested,
Until she deified her unhappy soul through faith.
In the heavens, God's sun shone,
But Pelagia's soul shone more.
Repentance-God has left us repentance.
By repentance, Pelagia was glorified.

Oh, if only we would invest as much effort in our souls as we invest in our bodies! Oh, if only we could become as desirous of adorning ourselves with virtue before God and His glorious angels, as we do with the vain, transitory, external displays of appearances! At first, both Pelagia and Thais were only aware of theier bodies, while their souls were slaves bound in the prison of the body. Both were adorned with nothing but vanity: clothed in vanity, arrayed with vanity, surrounded by vanity, and flattered by vanity. But what a sudden change! What a divine turn of events in their lives! More wondrous than if a wild apple were to be grafted and begin to bring forth sweet fruits; or if a turgid, fetid swamp were suddenly to become clear, pure potable water. When Bishop Nonnus, in the company of other bishops, first saw the sinner Pelagia in her outward splendor-clothed in the most expensive garments, adorned and bedecked with rings, necklaces and baubles, perfumed, and surrounded by slaves-Bishop Nonnus began to weep, and said to his companions: ``In truth, I have learned much from this woman. The Lord will set her before His Dread Judgment and will rebuke us through her. How many hours does this woman spend in her room bathing herself, clothing herself, adorning herself, and looking at herself in the mirror-and for what? Only to appear more beautiful to men. And we, who have the immortal Bridegroom in heaven, do not strive to adorn our souls with repentance; we do not hasten to bathe them with the tears of repentance and clothe them in the beauty of the virtues, that they might appear more beautiful before the eyes of God!''

Like a fragrant rose growing from thorns, / Thou wast revealed to the Church through thy virtuous deeds / Becoming a source of joy for the faithful. / Thou didst offer thy life in sweet-smelling fragrance / To him who made thee wonderful. / Entreat him to deliver us from every soul-destroying passion, / O righteous Pelagia!

The image of God was truly preserved in thee, O Mother, / for thou didst take up the Cross and followed Christ. / By so doing thou didst teach us to disregard the flesh for it passes away / but to care instead for the soul, since it is immortal. / Therefore thy spirit, venerable Pelagia, rejoices with the angels.

Thou didst wear out thy body through fasting, vigils, and prayer / beseeching the Creator to completely forgive thy deeds. / Thou didst achiev this, holy Mother Pelagia, / thereby showing us the way to repentance. Orthodox Greekness Vs. Greek Orthodoxy
In this, we reference St. Paul, who in one of his letters declared himself to be the chief of sinners. The idea here is that we approach the chalice not thinking of the sins of others, but of our own sins, for which we are responsible towards God.