Metropolitan Hilarion (Alfeyev) sent his greetings to the participants of the Fourteenth Ordinary General Assembly of the Synod of Bishops of the Catholic Church on the “Vocation and mission of the family in the Church and in the contemporary world” in which he highlights the importance of the Church's traditional familial stance: 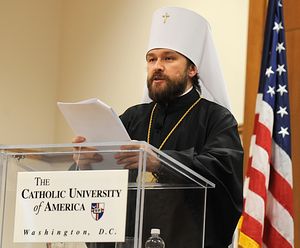 On behalf of His Holiness Patriarch Kirill of Moscow and All Rus I extend fraternal greetings to you on the occasion of the Fourteenth Ordinary General Assembly of the Synod of Bishops of the Catholic Church on the theme of the family.

In our restless and disturbing world the human person needs a firm and unshakeable foundation upon which he can rest and upon which he can build his life with confidence. At the same time, secular society, aimed primarily at the gratification of individual needs, is incapable of giving the human person clear moral direction. The crisis of traditional values which we see in the consumer society leads to a contradiction between various preferences, including those in the realm of family relationships. Thus, feminism views motherhood as an obstacle to a woman’s self-realization, while by contrast having a baby is more often proclaimed as a right to be attained by all means possible. More often the family is viewed as a union of persons irrespective of their gender, and the human person can ‘choose’ his or her gender according to personal taste.

On the other hand, new problems are arising which have a direct impact on traditional family foundations. Armed conflicts in the contemporary world have brought about a mass exodus from areas gripped by war to more prosperous countries. Emigration often leads to a disruption of family ties, creating at the same time a new social environment in which unions of an inter-ethnic and inter-religious nature arise.

These challenges and threats are common to all the Christian Churches which seek out answers to them, proceeding from the mission that Christ has placed upon them – to bring humanity to salvation. Unfortunately, in the Christian milieu too we often hear voices calling for the ‘modernization’ of our ecclesial consciousness, for the rejection of the supposedly obsolete doctrine of the family. However, we ought never to forget the words of St. Paul addressed to the Christians of Rome: ‘And be not conformed to this world: but be ye transformed by the renewing of your mind, that ye may prove what is that good, and acceptable, and perfect, will of God’ (Rom. 12: 2).

The Church is called to be a luminary and beacon in the darkness of this age, and Christians to be the ‘salt of the earth’ and ‘light to the world’. We all ought to recall the Saviour’s warning: ‘If the salt have lost his savour, wherewith shall it be salted? It is thenceforth good for nothing, but to be cast out, and to be trodden under foot of men’ (Matt. 5: 13-14). The salt which has lost its savour are those Protestant communities which call themselves Christian, but which preach moral ideals incompatible with Christianity. If in this type of community a rite of blessing of same-sex unions is introduced, or a lesbian so called ‘bishop’ calls for the replacement of crosses from the churches with the Muslim crescent, can we speak of this community as a ‘church’? We are witnessing the betrayal of Christianity by those who are prepared to accommodate themselves to a secular, godless and churchless world.

The authorities of some European countries and America, in spite of numerous protests, including those by Catholics, continue to advocate policies aimed at the destruction of the very concept of the family. They not only on the legislative level equate of the status of the same-sex unions to that of marriage but also criminally persecute those who out of their Christian convictions refuse to register such unions. Immediately after the departure of Pope Francis from the USA, President Barack Obama openly declared that gay rights are more important than religious freedom. This clearly testifies to the intention of the secular authorities to continue their assault on those healthy forces in society which defend traditional family values. Catholics here are found at the forefront of the struggle, and it is against the Catholic Church that a campaign of discrediting and lies is waged. Therefore courage in vindicating Christian beliefs and fidelity to Church tradition are particularly necessary in our times.

Today, when the world ever more resembles that foolish man ‘which built his house on the sand’ (Matt. 7: 26) it is the Church’s duty to remind the society of its firm foundation of the family as a union between a man and woman created with the purpose of giving birth to and bringing up children. Only this type of family, as ordained by the Lord when he created the world, can forestall or at least halt temporarily modern-day society’s further descent into the abyss of moral relativism.

The Orthodox Church, like the Catholic Church, has always in her teaching followed Holy Scripture and Sacred Tradition in asserting the principle of the sanctity of marriage founded on the Saviour’s own words (Matt. 19: 6; Mk. 10: 9). In our time this position should be ever more strengthened and unanimous. We should defend it jointly both within the framework of dialogue with the legislative and executive branches of power of various countries, as well as in the forums of international organizations such as the UN and the Council of Europe. We ought not to confine ourselves to well-intentioned appeals but should by all means possible ensure that the family is legally protected.

Solidarity among the Churches and all people of good will is essential for guarding the family from the challenges of the secular world and thereby protecting our future. I hope that one of the fruits of the Assembly of the Synod will be the further development of Orthodox-Catholic co-operation in this direction.

I wish you peace, God’s blessing and success in your labours. From Catholic to Orthodox?

From Catholic to Orthodox?
The conservative Catholic writer John Zmirak says that Pope Francis and his allies in Rome are playing with fire in their attempts to liberalize Catholic practice on divorced Catholics receiving communion. Russian Orthodox to Catholics: Let’s work together to defend life and family

Russian Orthodox to Catholics: Let’s work together to defend life and family
The Roman Catholic and Russian Orthodox Churches should join forces to defend marriage and the family on the international stage, the head of the Synodal Department for External Church Relations for the Moscow Patriarchate told Catholic bishops at the Vatican on Thursday.