Some Basic Principles of Orthodox Missionary Work in the 21st Century 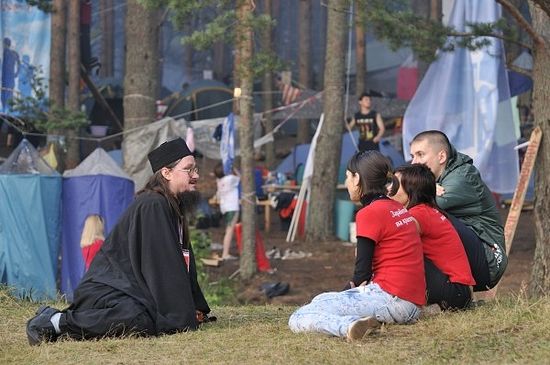 As world population rapidly heads towards seven billion and technology becomes ever more sophisticated, it seems as if the future world will be run as a Digitocracy. In such a system, perhaps not so distant now, authorities will be able to register and number every human-being born on earth electronically in a universal and obligatory DNA Facebook. Such a Western end-game of Digitocracy would enable complete control and manipulation of every individual on the planet by a single world ruler and his centralised and computerised bureaucracy. After all, the beast of the end time will have a number, and not a name.

For the last hundred years in particular, the world has seemed to be intent on speeding towards this self-inflicted end in a series of suicidal acts of hatred of God, man and self. However, we know that this rush to embrace spiritual and physical death is not inevitable. It can be slowed, stopped and even reversed. However, in order to do any of this, all who are willing must first be baptised into the Orthodox Church in the Name of the Holy Trinity and strive to live by Her. And if this is to happen, a number of very basic missionary principles must be followed. These principles are inherent in the very definition and nature of the Church as One, Holy, Catholic and Apostolic.

The Orthodox Church is One. Therefore, we must oppose the spirit of divisiveness and every movement of fragmentation which enters Church life. Unfortunately, this spirit came to the fore in the Orthodox world at the beginning of the last century, among intellectuals and their pseudo-intellectual imitators in Russia. Protestantised, and so lacking the collective or ‘catholic’ sense of the Church, they and their descendants later formed egotistical personality cults in the Russian emigration, especially in France and the USA. In turn, in the emigration they recruited converts, mainly from Protestantism, for like attracts like. Their general reflex is even more to divide the Church, whenever there is a disagreement even with a single individual in the Church, they leave and found a ‘new Church’ or ‘jurisdiction’. The level of intolerance may be such that some refuse even to speak to others because they do not agree with them about some tiny detail. Only the renewed consciousness that the Church is One, and so greater than any number of personalities, can overcome such a spirit of division.

Another area of divisiveness in the Orthodox world appeared in the last century through the obligatory introduction by various Westernised States of the new calendar into Church life. The forced introduction of this ‘new calendarism’, with both direct and indirect persecution by State authorities, scandalised the faithful who wished to remain faithful to the Church of Christ and refused apostasy. It also led to the reaction of ‘old calendarism’, with its sectarian and divisive nature. It is clear that the way ahead is for the episcopates of the Local Orthodox Churches concerned, acting together in Local Councils, to defy their anti-Christian States and return to the Church calendar. This is still faithfully adhered to by the vast majority of Orthodox with regard to the whole Church Year and adhered to by virtually all Orthodox with regard to the Paschal cycle. This would be an act of unity and also an act of repentance for the past. Only such an act can resolve the issue of old calendarism once and for all.

The experiences of the world naturally divide humanity into people of left and right, into liberal and conservative, into social and individual frames of mind. Although the Church Herself stands above such worldly, ‘party’ divisions, Her flock nevertheless to some extent reflects these experiences. Thus, in the USA, for instance, Greek Orthodox tend to be Democrats and Russian Orthodox tend to be Republicans. Why? Simply because for Greeks whose families came from dirt-poor backgrounds where they never had enough to eat and who emigrated to work hard in restaurants and factories, the Democratic Party seemed natural. However, for Russians, whose families had been massacred by Communists, their property confiscated or destroyed and themselves forced to flee for their lives, the Republican Party seemed natural. Such are the experiences of the world.

However, the Church offers neither of these factions, which by themselves will only ever attract one group or part, repelling the other. As it is said, ‘you cannot attract bees with vinegar’. And any party faction is always vinegar for another. This is why the Church can only offer the honey of authentic holiness, which can repel no-one. Of course, from the outside the Church may at times appear to be more inclined to one faction or another and holiness can be pretended by the fraud and the charlatan, but this is only an appearance. In reality, the Church is the sole repository of holiness, as can be seen in Her saints, and holiness is an integral part of the fourfold essence of Her nature. It may sometimes be necessary to dig a little to find holiness, but it can always be found in the Church and only in the Church, albeit in those ‘secret’ places which are not talked of and are even despised by those on the noisy outer fringes of the Church.

If the Orthodox Church through Her Local Churches is to fulfil Her worldwide missionary role, local knowledge is essential to those who are integrated in the life of the Church. In this sense missionary work can only be done by those of dual culture, those who bear Church culture within themselves, but who also have understanding of local culture. There are many examples of this. For example, St Herman of Alaska remained faithful to his monastic culture, but shared his wisdom with local families. St Nicholas of Tokyo remained faithful to his Russian Orthodox background, but learned Japanese and even became an expert on the history and culture of Japan. He never feared to translate, ignoring false and defensive anti-missionary pretences that Japanese could not express the subtleties of Slavonic or that Japanese could not become Russians. Much the same can be said of contemporary Orthodox missions in South America, Black Africa, Indonesia, Thailand and China. Cultural narrowness is always suicidal because it is against the catholicity of the Church.

If the Orthodox Church through Her Local Churches is to fulfil Her worldwide missionary role, then there must be Orthodox who are grounded in the Faith but who also have local knowledge. Time and again we have seen how Russian Orthodoxy fails to expand under clergy who are fresh from Russia, who even after 25 years or more in the country do not speak the local language, already spoken by most of their flock, and so have little understanding of the local culture, already adopted in part by the flock. Here, in theory though not always in practice – it is not automatic and depends on individuals - the Russian Orthodox Church Outside Russia (ROCOR) should have an advantage over missions abroad of the Russian Orthodox Church inside Russia. Similarly, time and again we have seen how generations of Cypriots, British-born and with virtually no knowledge of Greek, are lost to the Church, because, instead of training second and third generation Cypriots for the priesthood and housing and paying them, Greek-speaking clergy are sent fresh from Greece to Cypriot parishes in London, where only the elderly understand them.

If the Orthodox Church through Her Local Churches is to fulfil Her worldwide missionary role, then Her members must put their Faith before their native cultures and languages. The Church converts to a new Faith through the tools of the local language and local culture. Only when conversion has taken place are the local culture and even aspects of its language modified. To understand missionary work primarily, or even secondarily, as conversion to an alien and foreign language and culture is merely to repeat the error of Non-Orthodox missionaries. They, primarily and secondarily, have attempted to introduce Western values, prejudices, dress, education, languages and habits, into the Americas, Africa and Asia, or more recently into the Ukraine and Iraq. They have always been a conscious or unconscious integral part of Western colonisation, of self-defensive and self-justifying Westernisation. True Christian missionaries do not do this, but adapt their own values, prejudices, dress, education, languages and habits to the local population. Only what is spiritual does not change. What is merely human does change.

It is no good putting a language, into which the Gospel and Church services have already been translated, higher than Christ. It is no good saying that only Greek, Slavonic and Latin may be used in Church services. All these languages are languages of translation, for our Lord spoke in Aramaic. To do otherwise would be to deny the value of the missionary work of the Apostles, of St Thomas in India, of St Nina in Georgia, of Sts Cyril and Methodius among the Slavs, of St Stephen of Perm among the Zyrians. It would be to reject all of Arab and Romanian-speaking Orthodoxy, let alone all the missionary endeavours of the last centuries, in Siberia, the Far East, Western Europe, the Americas and Australasia. It would be to renounce the Apostolicity of the Church, to become anti-missionaries. The contemporary translations into liturgical English, more or less complete now, are a missionary key here. For as English is the world language, spoken and studied by billions, Orthodox liturgical translations can now be made not just into Albanian, Welsh, Catalan and Danish, as they have been in recent decades, but also into Mandarin, Hindi, Bangla, Yoruba, Nepalese, Mayan, Punjabi, Tagalog, Lao, Zulu and a thousand other languages beside.

The above principles may seem obvious common sense to many, but they are often overlooked, precisely because they are so obvious. In the decades to come the Orthodox Church will have ever more global responsibilities. Representatives of ever more nationalities will come forward, requesting baptism. In my own parish I require Turkish and Chinese, electronically I am contacted from the Philippines, from Pakistan and the Congo. This is the future. As the heterodox institutions of the Western world collapse, the Orthodox Church is the World Church and we must assume our responsibilities. In this we shall imitate the greatest figure of the Russian Orthodox emigration, one who never shirked his missionary duties and use of other languages, hiding behind cultural nostalgia or personal insecurity, St John of Shanghai. It is for us, following our present Metropolitan Hilarion of New York, to follow in his path. On Missionary Work
Archpriest Andrei Tkachev
The history of the Christian world is the history of dramatic interrelationships between God and His new people. The Lord chose and raised up a hitherto unknown people who were sitting in historical darkness. The Lord gave them Himself, and it was good for them, as long as He was their main wealth.

Opening a Door for the Lord in People’s Hearts
An interview with Archpriest Alexy Aedo (Chile)
Father Alexy Aedo, Chilean native and archpriest with the Russian Orthodox Church Abroad, is the pastor in Chile of two Orthodox communities — that of St Silouan of Mount Athos in the city of Conception, and that of St Nectarios of Aegina in the city of Santiago. Interview with Archimandrite Meletios (Webber)
Nun Cornelia (Rees), Archimandrite Meletios (Webber)
I was immediately attracted to the quality of the stillness that I found in that small room. That has been something that I have consistently valued in the Orthodox Church ever since. It is a quality which is difficult to talk about, but it happens when one goes into a space which is so obviously God-filled.
Comments
×