Dmitri of Uglich and the Three False Dmitris: One of the Most Bizarre Episodes in Russian History 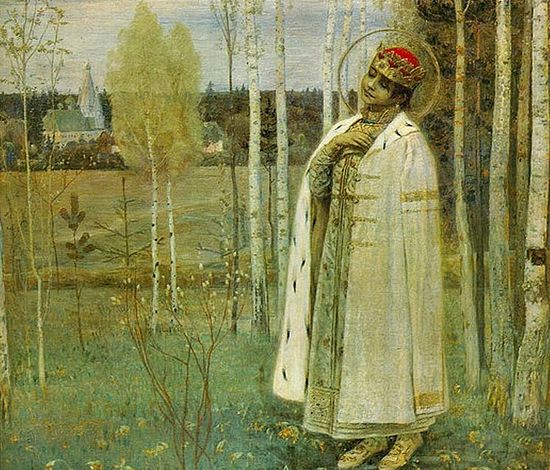 Dmitri (Dmitry) of Uglich, known also as Tsarevich Dmitri or Dmitri Ivanovich, was the youngest son of the first Tsar of All the Russias, Ivan IV Vasilyevich, more commonly known as Ivan Grozny or Ivan the Terrible. There is not much that can be said about the life of Dmitri of Uglich, as he died at the extremely young age of eight. Nevertheless, it is his ‘afterlife’ that contributed to one of the most bizarre episodes in Russian history.

About a decade and a half after the young Tsarevich’s death (be it due to murder or by accident), not one, but three pretenders appeared within a short period of ten years. Each of these imposters claimed to be the murdered Tsarevich, and with that identity, laid claim to the Russian throne as well. These pretenders are known today as False Dmitri I, False Dmitri II and False Dmitri III respectively.

The story of Dmitri of Uglich begins with the death of Ivan Grozny’s beloved first wife, Anastasia Romanovna, in 1560. Following Anastasia’s death, Ivan remarried five times, the last of which was to Maria Nagaya, who later gave birth to Tsarevich Dmitri. As the Church only authorized the first four of the Tsar’s marriages, Ivan’s marriage to Maria Nagaya was considered illegitimate, as was her son, Dmitri.

The death of Ivan’s first wife also severely affected his mental health, causing him to become mentally unstable. Apart from problems with affairs of the state, Ivan’s insanity also had a profound effect on his domestic affairs. For instance, the Tsar’s insanity once led him to beat his pregnant daughter-in-law, causing her to miscarry. Furthermore, Ivan caused the death of his own heir, Ivan Ivanovich, when he struck his son’s head with his pointed staff during a fit of rage. 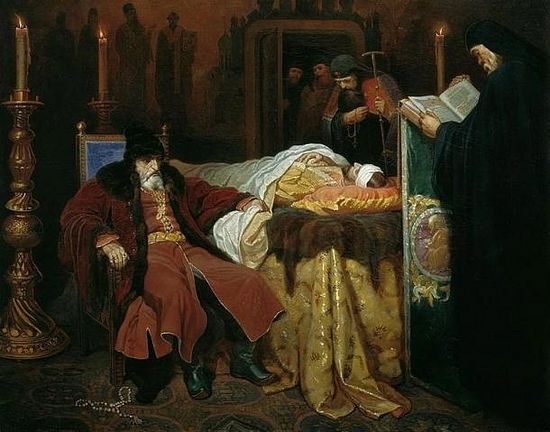 Ivan the Terrible near the body of his son Ivan Ivanovich, whom he murdered in a fit of rage. By Vyacheslav Schwarz. (1864) (Public Domain)

As a result of these actions, Ivan was succeeded by his much less capable son, Feodor, upon his death in 1584. According to some, the new Tsar was not only feeble in body, but also in mind. This meant that Feodor was a ruler only in name, and that real power was in the regency council that was established to guide the Tsar.

One of the most prominent figures of the council was Boris Godunov, the Tsar’s brother-in-law. Feodor and his wife, Irina, did not produce an heir, and, according to one popular account, Godunov was hoping to occupy the Russian throne once Feodor died. In order to achieve this, Godunov would have to have to get rid of the last of Ivan’s sons, Dmitri. 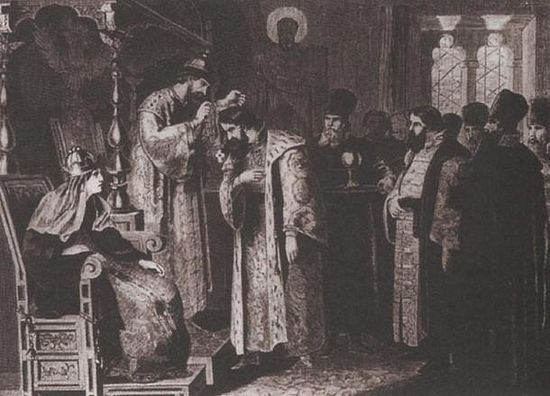 Feodor puts a golden chain on Boris Godunov. By Aleksey Danilovich Kivshenko. (Public Domain) Feodor was a weak Tsar and Boris Godunov was one of his most prominent councilors. Many scholars also suspect Godunov is responsible for Dmitri’s exile and assassination.

Therefore, in the year than Ivan died, Dmitri, his mother, and his uncles were exiled to Uglich, the Tsarevich’s appanage city. In 1591, Dmitri died from a stab wound under mysterious circumstances. It was only natural that Godunov was suspected to have a hand in this. 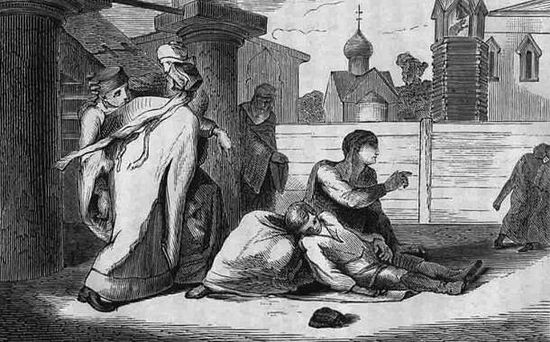 
The Parade of False Dmitris Begins

Godunov eventually succeeded Feodor when the latter died in 1598. However, a surprise was on the way and in 1604, a man claiming to be Tsarevich Dmitri appeared. This was a man later to be known as False Dmitri I, whose true identity, even today, remains a mystery, though there is one strong but unproven possibility.

According to this speculation, False Dmitri I was Grigory Otrepiev, the son of a minor official in a rural village. After failing in every other occupation, Otrepiev became a monk, and resided in a monastery near Moscow. He had to flee, however, as he incurred the displeasure of both the Church and State authorities when he began telling his fellow monks that he would become the Tsar someday.

He then lived amongst the Cossacks for a while, and even managed to convince a number of them that he was Tsarevich Dmitri. After this, he moved to Poland, and found himself in the service of Adam Wisniowiecki, a Polish prince. Eventually, the Tsarevich revealed his ‘identity’ to his patron, and was presented to the Polish king, Sigismund III. 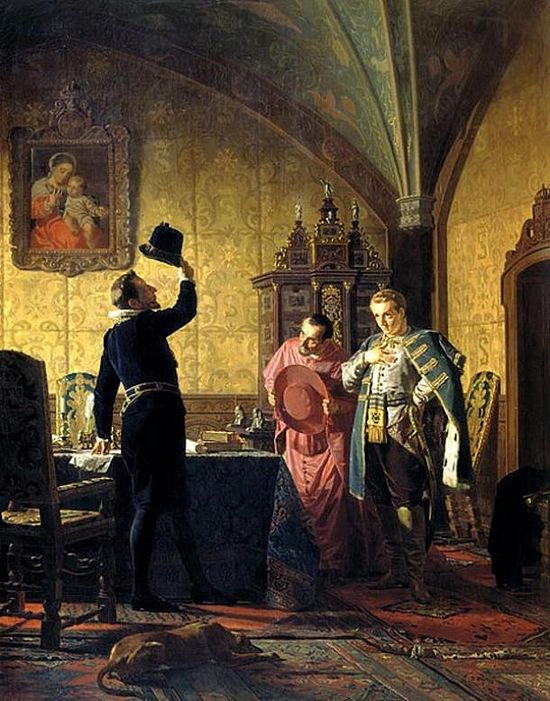 The Decline of False Dmitri I

Seeing this as a chance to deal a blow to Tsar Godunov, Sigismund decided to support False Dmitri I. The pretender was also supported by the Cossacks, and eventually was able to capture Moscow in June 1605, about two months after Godunov’s death.

Although the new Tsar was initially popular, he soon found himself in trouble. On the one hand, the presence of numerous Polish nobles and Catholic priests in his court made his Russian subjects uneasy. On the other, Dmitri’s Polish allies were beginning to grow impatient when there was no sign of him delivering his promise, i.e. the conversion of Russia from the Orthodox faith to Roman Catholicism.

Thus, in May 1606, armed men hired by the boyars led rioters into the Kremlin. Whilst the rioters were told that they were going to rescue the Tsar, as the Poles had been plotting to kill Dmitri and take over Russia, the hired men had actually been given orders to kill the Tsar. Dmitri tried to escape, broke a leg when he leapt from a window, and was shot dead. 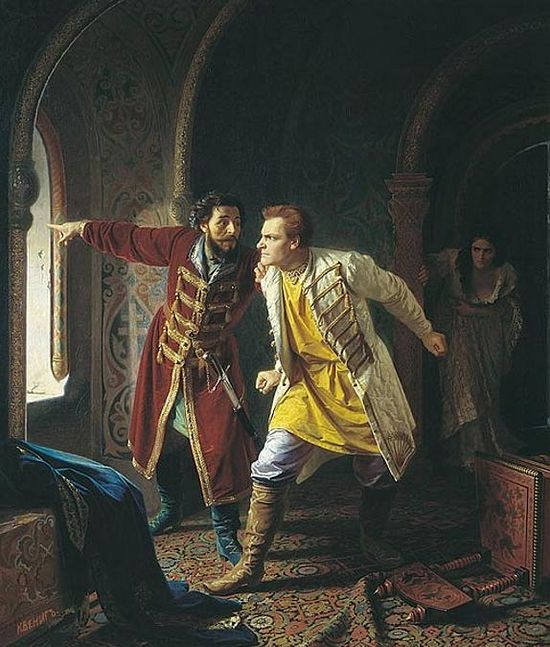 His body was then dismembered, burned, and the ashes fired towards Poland from several cannons. At the time it was believed that False Dmitri I was a sorcerer who could bring his dismembered corpse back together and rise from the dead. Thus, every precaution had to be taken to prevent this from happening.

False Dmitris II and III Have Even Less Luck

Nevertheless, False Dmitri still ‘returned from the dead’. In 1607, another imposter appeared, claiming to be both Dmitri of Uglich and False Dmitri I. This imposter was supported by Tsaritsa Marina, False Dmitri I’s Polish wife, and managed to muster an army of over 30,000 men. 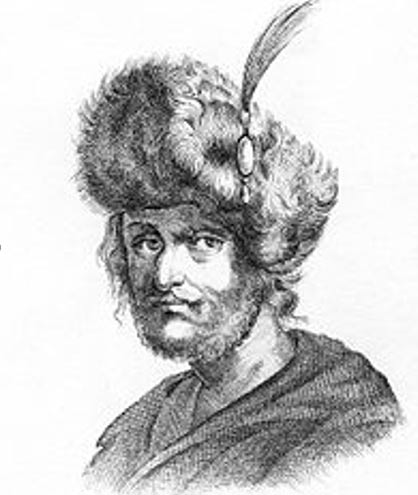 He was able to establish his court in Tushino, not far from Moscow. Following this, neither False Dmitri II nor the legitimate Tsar, Basil IV, could unseat the other and there were two ‘rulers’ in Russia at that time.

Eventually, False Dmitri II took a drastic action and tried to blockade Moscow. This failed when his Polish troops were summoned to Smolensk by Sigismund III to help with the siege of that city. After this failure, the pretender fled to Kaluga, where he was killed by one of his own men in a personal dispute in December 1610. 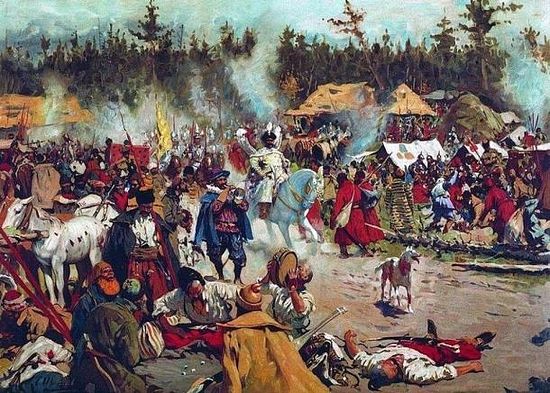 ‘Time of Troubles in the Moscow region/The army of the Pretender.’ (1908) By Sergey Vasilyevich Ivanov. (Public Domain) False Dmitri II tried to blockade Moscow and Tsar Basil IV but was defeated and fled.

Dmitri ‘rose from the dead’ one last time in the person of False Dmitri III. This Dmitri gained the support of the Cossacks in the east, and was proclaimed Tsar in 1612. However, only a few weeks into his ‘reign,’ False Dmitri III was captured, sent to Moscow, and executed. This was the end of the parade of frauds claiming to be the poor young (and dead) heir of Ivan the Terrible, and Dmitri of Uglich was finally able to rest in peace. 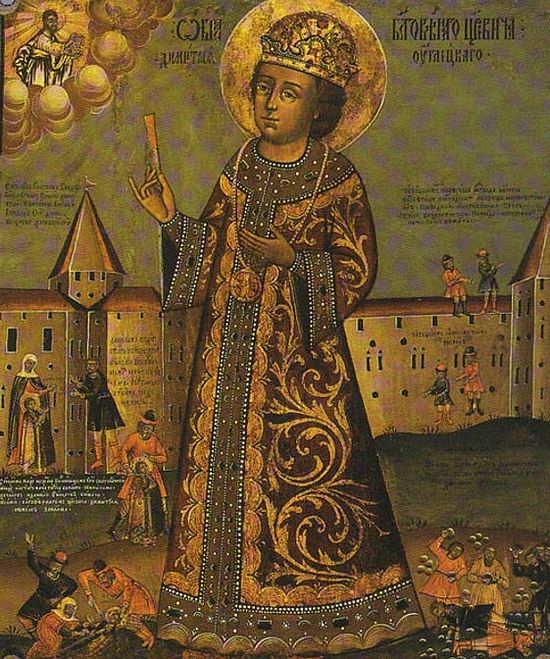 Icon of Dmitri of Uglich. (CC BY SA 2.0) In the Russian Orthodox Church Dmitri is venerated as “Saint Pious Tsarevich.” The Tsar's Photographer and His Amazing Contribution to the Preservation of Russian History
100 photos, 100 years old or older, 100 years after Sergei Prokudin-Gorsky completed his historic quest to capture the beauty, diversity, and spiritual power of Tsarist Russia.