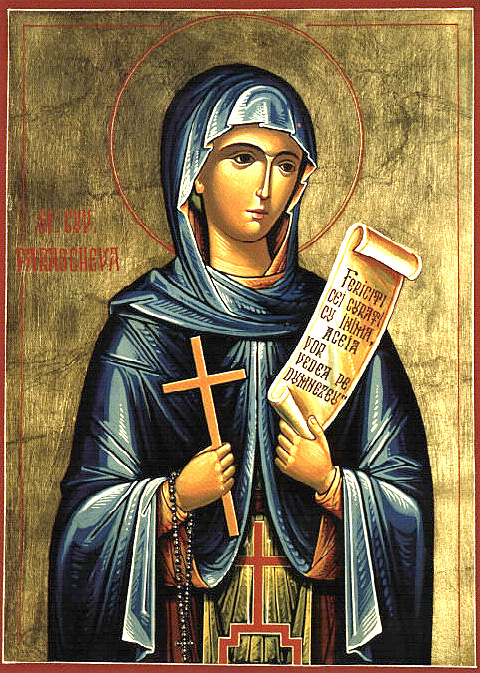 This glorious saint was of Serbian descent, and was born in the town of Epivat between Selymbria and Constantinople. St. Parasceva's parents were wealthy, devout Christians. They also had a son, Euthymius, who was tonsured a monk during his parents' lifetime, and later became the famous Bishop of Madytos. The virgin Parasceva always yearned for the ascetic life for the sake of Christ. After her parents' repose, she left her home and went first to Constantinople, then to the wilderness of Jordan, where she lived the ascetic life until old age. Who can express all the labors, sufferings and demonic temptations that St. Parasceva endured in the course of her many years? In her old age, an angel of God once appeared to her and said: ``Leave the wilderness and return to your homeland; it is necessary that you render your body to the earth there, and your soul to the habitation of the Lord.'' St. Parasceva obeyed, and returned to Epivat. There she lived for two years in ceaseless fasting and prayer, then gave up her soul to God and took up her abode in Paradise. St. Parasceva entered into rest in the eleventh century. Over the course of time her relics were translated to Constantinople, to Trnovo, again to Constantinople, and then to Belgrade. Her relics now repose in Romania, in the town of Iasi. In Belgrade, the well of St. Petka miraculously heals the sick who draw near with faith in God and love for this saint.

``The Lord desires a pure heart'':
Thus says the Gospel.
A pure virgin you remained,
And you gave your pure heart to God-
O most wonderful saint,
Saint Parasceva, our ideal!

The Lord seeks a most pure mind,
Without fancy and without falsehood;
And you presented Him your most pure mind,
Like that of an angel, of the same kind.
O most wonderful saint,
O Saint Parasceva, hearken to our petitions!

The Lord seeks a pure soul,
As a heavenly shrine;
You perfected such a soul,
And now shine in heaven.
O most wonderful saint,
Parasceva, help us!

By your prayers, help us
In the misfortunes of life.
Through the clouds of earthly sorrow
Bring us light, like a rainbow-
O chaste virgin, most wonderful,
Holy Mother Parasceva!

Examples of how the saints themselves reveal their hidden relics to men justify the honor rendered to the relics of the saints-not to mention the miraculous action of these relics, which doubly justifies them. For a long, long time, no one could locate the grave of St. Parasceva. Then it happened that a sailor died, and his body was carelessly laid in the proximity of the saint's grave. When the body turned into carrion and began to emit an unbearable stench, a monk who lived nearby summoned the peasants to help him bury the corpse. It happened that they buried him in St. Parasceva's own grave. That night, St. Parasceva appeared in a dream to one of those peasants (George by name) who had buried the corpse. She appeared as a beautiful and exquisitely-adorned queen, surrounded by many glorious soldiers. She said: ``George, exhume my relics at once, and lay them in another place; for I can no longer endure the stench from that corpse.'' Then she told him who she was, and where she was from. The same night a local peasant woman named Euphemia had the same dream. The next day, the peasants began to dig and in fact found the relics of St. Parasceva. They were extraordinarily fragrant, and soon proved to be miracle-working.

Thou art worthy of praise, Paraskeva. / Thou didst love the ascetic and hesychast life. / Thou didst run with longing to thy Bridegroom, Christ. / Thou didst accept His good yoke in thy tender years, marking thyself with the sign of the Cross. / Thou didst fight against impure thoughts; / through fasting, prayer and the shedding of tears thou didst quench the burning coal of the passions. / Now in the heavenly bridal chamber of Christ, / as thou standest together with the wise virgins / intercede for us who honor thy precious memory. Righteous Tabitha: Living for God
Roman Savchuk
The humble acceptance of what happens as being how it should, and gratefulness for everything God sends is the answer of the mighty, but other-worldly. Here the main strength is not judging, not trying to decide for God what is best for our lives, where we can bring the most benefit.