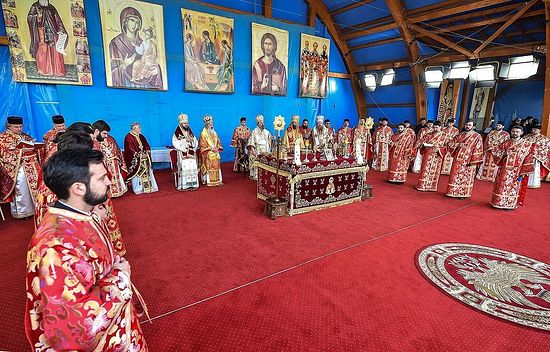 On October 26 the Romanian Orthodox Church celebrated the holy and glorious Great Martyr Demetrius, the Myrrh-gusher during the on-going pilgrimage in honor of St. Demetrius the New, the protector of Bucharest. The Vigil service for St. Demetrius was celebrated at the summer altar of the Patriarchal Cathedral by His Grace Timotei Prahoveanul, Vicar Bishop to the Archdiocese of Bucharest, reports the Basilica News Agency.

In his sermon His Grace stated:

Today, nearly all the Christian righteous faithful are guilty of a serious sin, namely tacit apostasy. What does that mean? It is very simple. We give up Christ and find no time to give witness. Neither do we find time to venerate the saints like Saint Demetrius and the others together with him. We find time for everything but essential things. This is why the model of witnessing and the unlimited love of Saint Demetrius calls us again and again to remember the words of the Savior: “Whoever confesses me before others, I will also confess before my Father in heaven. But whoever denies me in front of others, I will also deny before my Father who is in heaven.” Those who confessed Him, the Lord of life, in times past or nearer to us, He will also confess for. And those who deny Him in various ways He will also deny. This is why Saint Demetrius urges us to remember our Christian baptism and what we have to accomplish as children of the Church.

The next day the Divine Liturgy was served also at the outdoor altar next to the Patriarchal Cathedral by an assembly of bishops led by His Eminence Pavlos, Metropolitan of Drama, together with His Eminence Teodosie, Archbishop of Tomis; His Grace Siluan, Romanian Orthodox Bishop of Hungary; His Grace Macarie, Romanian Orthodox Bishop of Northern Europe; and His Grace Timotei Prahoveanul.

In an era such as today there is need for a loving mission to guide youth towards Christ. In an era in which atheism and spiritual corruption influence young people to live a licentious life, a life dominated by pleasures, there is need for Christians imitating St. Paul the Apostle and St. Demetrius the Great Martyr, and who by their word and example of living can call young people to true life.

Although he was an officer of the Roman army, St. Demetrius was actually a soldier of Christ. He was a Christian in a time in which being a Christian had a great cost. This means that no matter the dignity one holds, he can still be a soldier of Christ our Savior and of His Church, His Eminence Metropolitan Pavlos also underlined:

One’s profession or dignity does not represent an obstacle for Christian life and faith. Do you think that in our days there are no new martyrs revealed? In Middle-Eastern countries the pitiless sword of Islam cuts down authentic Christians and counts them in the same army of Great Martyr St. Demetrius. Because our saint was and is an imitator of Christ, it would be best for us to establish ourselves in the likeness of Christ; let us imitate the saints, according to the word of St Paul the Apostle: Therefore I urge you, imitate me, (as I imitate Christ).

At the end of the Divine Liturgy His Eminence thanked His Beatitude Patriarch Daniel for the honour of concelebrating on the Hill of the Patriarchate. He also congratulated the faithful for their godliness and dedication shown on the occasion of this pilgrimage:

“You are the praise, the blessing and the strengthening of the Romanian Orthodox Church. You are the boast of this Church. Remain always close to the Church.”

St Demetrius the Myrrh-gusher is one of the great martyrs, wonderworkers and healers of the Orthodox Church. He lived in the third century, during the reigns of the Roman Emperors Maximian and Diocletian, and was a general of the army of Thessalia and a proconsul of Greece.

He was martyred in the year 306 because he would not deny his faith in Christ our Savior. Address of His Eminence Metropolitan Pavlos of Drama at the Way of the Saints Procession in Bucharest
Metropolitan Pavlos of Drama
And their voices have been heard. The sun called John Chrysostom hasn’t set ever since. His mouth and his golden words have never been sealed. The writings and sayings of the golden-mouthed saint are decisive. Through his writings and sayings he is a contemporary of every generation, and especially of our generation.