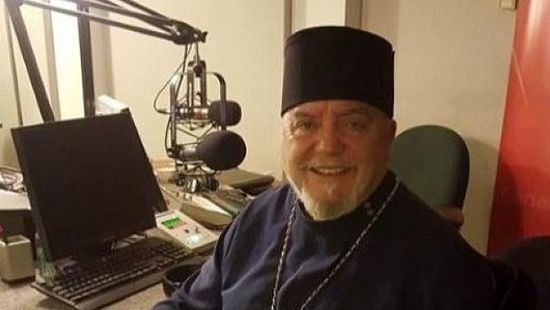 Father Michael Oleska says during his first year in seminary, a letter came from a village in Alaska that couldn't find a priest. Oleska moved to Old Harbour on the Kenai Peninsula 45 years ago, and has been in Alaska ever since. (Dave White/CBC)

When Father Michael Olseka started documenting the Native history of Alaska decades ago, he was met with resistance from other academics.

"I was accused by other historians of fabricating it, that I was making it up," he says.

The Orthodox Christian priest had learned that, contrary to practices elsewhere in the United States, early missionaries in Alaska taught indigenous people to build and sail ships, and to run stores, schools and hospitals.

Olseka, who has a doctorate in Native Alaskan history, believes other scholars were hesitant to accept his work, because they were prejudiced and didn't believe Native people could have been capable of sailing ships around the world 150 years ago.

The priest was in Whitehorse last week, meeting with a local parish and giving public lectures.

Oleska says Canada has done more than the United States to address its residential school history. He started digging into Alaska Native history when he moved to an Alutiiq village on the Kenai Peninsula 45 years ago.

He calls the history of Orthodox Christian schools in Alaska a "happy anomoly."

"The so-called Russians were really not mostly ethnic Russians who came to Alaska, they were themselves Siberian Native people who spoke Russian and who were Orthodox Christians."

He says the religion grew with the intermarriage between Siberian Natives and the local indigenous population. Oleska says the Alutiiqs were taught in Orthodox Christian schools in their own language.

"There was this incredible effort to educate First Nations people in Alaska during the Russian period which ... in our history books has been completely neglected."

The Orthodox Christian community in Alaska has continued to grow since the arrival of the Russians. Oleska says there are currently about 100 churches and 50 or so priests — the vast majority of whom are Native. In Alaska, Selecting a Bishop is Like an"Arranged Marriage"
Fr. Michael Oleksa

In Alaska, Selecting a Bishop is Like an"Arranged Marriage"
Fr. Michael Oleksa
Abbot Gerasim (Eliel) was invited to celebrate Christmas and Theophany in Southeast Alaska, among the predominantly Tlingit parishes of Sitka, Juneau and Hoonah. They welcomed him and seem to have been favorably impressed by him.
Comments
×