Two Churches of the Kazan Icon of the Mother of God

On his Royal Russia blog Paul Gilbert has a fantastic collection of beautiful Orthodox churches in Russia, two of which are named for the Kazan Icon of the Mother of God. These two entries are presented here:

Our Lady of Kazan at Kolomenskoe 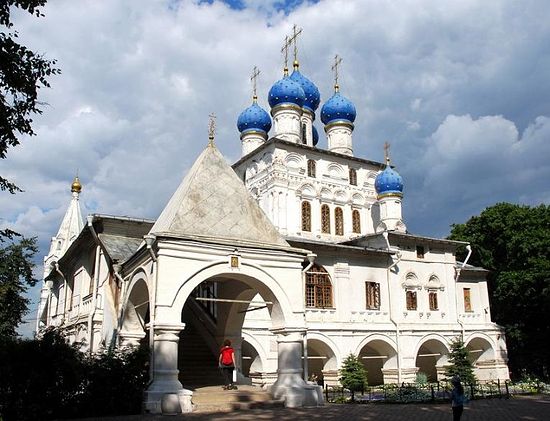 One of the most spectacular churches in the Moscow region is that of Our Lady of Kazan at Kolomenskoye. Construction of the church began during the reign of Tsar Mikhail Feodorovich (1596-1645), and completed by his son Tsar Alexis Mikhailovich (1629-1676) in the 1660s. The Church of Our Lady of Kazan is crowned with five striking blue onion-shaped domes with golden stars.

After construction works were finished, the church was painted and richly decorated with various fabrics and carpets. The metal floor of the central part and the stone floor of the side-altars were felted to make them warmer. The wall icons were decorated with veils and towels; many icons were kept in carved cases. It was mentioned that most of the court prayed in the refectory, the tsar's confidants prayed in the church in front of the icon-stand. The Tsar and the Tsarina sat on the festively decorated prayer thrones.

Up until the late 18th-century, the church was connected with a vast four-storey wooden palace built by Tsar Alexis in 1667. The palace was dismantled in the 1760s by order of the Empress Catherine II. A reconstruction of the wooden palace began in 2007 and was completed in 2010. Today it is heralded by some as the "Eighth wonder of the world" and has become one of Moscow top attractions.

The Romanov's decision to dedicate this church to the Kazan Virgin was influenced by the role the icon played during the tumlutuous Time of Troubles. During the siege of the Kremlin in 1612, Russians carried the icon with them, as did the liberation troops, who ousted the Poles from Moscow and restored the monarchy. 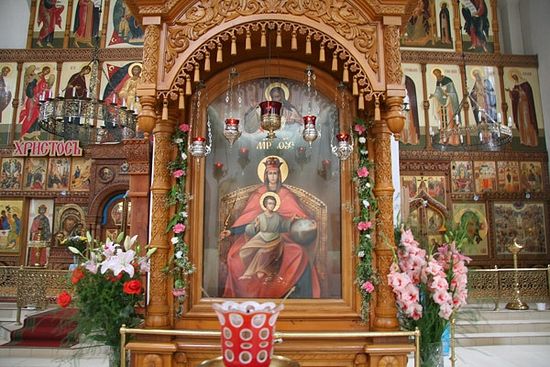 The beautiful 17th-century icon of Our Lady of Kazan, mounted into the carved icon screen to the left of the royal gates, was recovered seventeen years after Tsar Ivan IV (the Terrible) captured the Kazan fortress from the Tatars in 1552.

Services at the church ceased between 1941-1942, but have resumed and are now held year round. 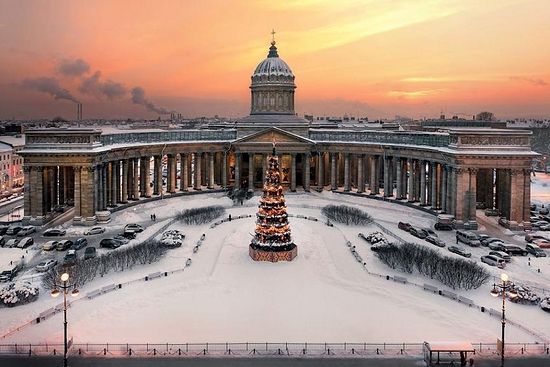 Whilst taking a stroll along Nevsky Prospekt, the main thoroughfare in St. Petersburg, one cannot fail to notice the impressive Cathedral of Our Lady of Kazan. Built between 1801 and 1811 by the architect Andrei Voronikhin, the cathedral was constructed to an enormous scale and boasts an impressive stone colonnade, encircling a small garden and central fountain.

The cathedral was inspired by the Basilica of St. Peter’s in Rome and was intended to be the country’s main Orthodox Church. Some art historians assert that Emperor Paul I intended to build a similar church on the other side of Nevsky Prospect that would mirror the Kazan Cathedral but his plans failed to materialize. Although the Russian Orthodox Church strongly disapproved of the plans to create a replica of a Catholic basilica in Russia's then capital, several courtiers supported Voronikhin's Empire Style design. 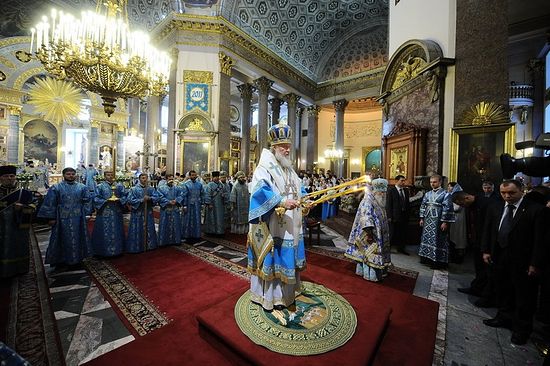 After the war of 1812 (during which Napoleon was defeated) the church became a monument to Russian victory. Captured enemy banners were put in the cathedral and the famous Russian Field Marshal Mikhail Kutuzov, who won the most important campaign of 1812, was buried inside the church.

On February 21 1913 a solemn religious service was held in the cathedral to mark the 300th Anniversary of the Romanov Dynasty. It was attended by Tsar Nicholas II, his family and relations, as well as the elite of the Russian state, the State Duma, marshals of the nobility, representatives of the urban estate, and peasant elders made up the throng of four thousand. The Russian newspaper, Novoe Vremia reported, "It was all brilliance, the brilliance of the ladies' diamonds, the brilliance of the medals and the stars, the brilliance of the gold and silver of the uniforms." [Source: Scenarios of Power: Myth and Ceremony in Russian Monarchy, Volume Two by Richard S. Wortman. Princeton University Press (2000) ]

The cathedral was named after the "miracle-making" icon of Our Lady of Kazan, probably the most venerated icon in all of Russia. The church housed this precious icon until the early 1930s. The Bolsheviks closed the cathedral for services in 1929, and from 1932 it housed the collections of the pro-Marxist Museum of the History of Religion and Atheism, which displayed numerous pieces of religious art and served anti-religious propaganda purposes.

Services were resumed in 1992, and four years later the cathedral was returned to the Russian Orthodox Church. Now it is the mother cathedral of the metropolis of St. Petersburg. In 2011 the cathedral marked its 200th anniversary. The interiors have been undergoing restoration work in an effort to restore this historic and holy cathedral to its original. 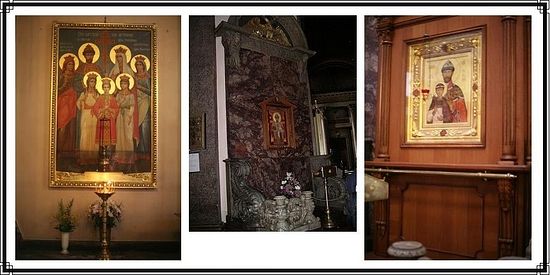 Our Lady of Kazan Cathedral photos (left to right) – (1) A large icon of the Holy Royal Martyrs; (2) the spot where Tsar Nicholas II prayed during his visits to the cathedral is marked by an icon of his image; (3) icon depicting Tsar Nicholas II and his son, the Tsarevich Alexei Nicholayevich

The cathedral's interior, with its numerous columns, echoes the exterior colonnade and is reminiscent of a palatial hall, being 69 metres in length and 62 metres in height. The interior features numerous sculptures and icons created by the best Russian artists of the day. A wrought iron grille separating the cathedral from a small square behind it is sometimes cited as one of the finest ever created. Homily of the Feast of the Kazan Icon of the Mother of God
Commemorated July 8/21, October 22/November 4
Archimdrite Kirill (Pavlov)
Thus we see, dear brothers and sisters, that the main cause of our country’s salvation from destruction was the firm Orthodox faith of our ancestors. When hope in human strength was no more, then all the true children of the Church and Fatherland placed a three day fast on themselves and prayed to the Mother of God before her Kazan icon. Their prayer was heard.
Comments
×