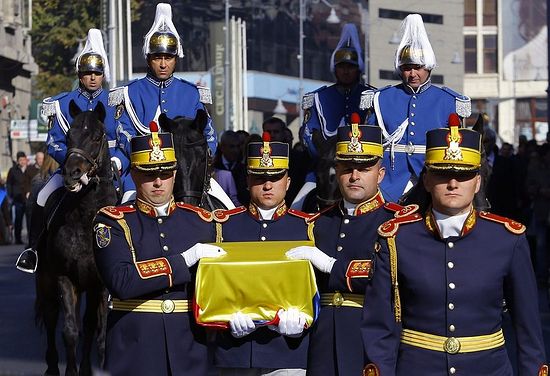 It has been a busy few years for royal remains. In 2012, King Richard III’s bones were found under a parking lot in Leicester, England, and reburied in March. In September, the Russian authorities exhumed the bodies of Czar Nicholas II and Empress Alexandra for new DNA tests. Last week, the Russians said the body of the czar’s father, Alexander III, would be dug up for testing, too.

A few hundred people gathered in the Romanian capital, Bucharest, on Tuesday morning for a less macabre occasion: the final journey of the heart of Marie, the British-born queen of Romania.

The heart, contained in a small silver box, was moved from the National History Museum, where it has been since 1971, to Pelisor Castle, to be placed in the room where she drew her final breath in 1938. Dignitaries stood somberly on the stone steps of the museum. Some in the crowd nearby dressed in traditional outfits, while others waved flags or wore pins with the emblem of the royal family. Some of the queen’s descendants, most of them living overseas, were in attendance.

Queen Marie, a granddaughter of Queen Victoria of Britain, nursed wounded soldiers during World War I and was beloved for her charitable and diplomatic work.

“She is someone who succeeded in becoming a moral reference for society in her time and now,” a former prime minister, Calin Popescu Tariceanu, said in an interview. “During the Communist period, history was heavily distorted and for people my age, even now, they have a completely skewed perception about the past. But step by step, society is reconsidering in a positive way its past. We need even today to have moral references in society.”

Marie had requested that her heart be placed in a chapel in Balchik, a town on the Black Sea that at the time belonged to Romania. The region was returned to Bulgaria in 1940, and the heart was moved to a new home in Romania, only to be relocated to the museum in the Communist era. The rest of her body is interred alongside her husband, King Ferdinand I, in the Curtea de Arges monastery in central Romania.

Romania has been a republic since 1947, when Marie’s grandson, Michael, now 94, was forced to abdicate as the Communist Party tightened its grip on the country. Her family had long requested that the heart be moved to a place connected to the royal family.

Only a small percentage of the country still hopes for the return of the monarchy. “Romania is a monarchy that accidentally became a republic,” said Octavian Georgescu, a 39-year-old I.T. programmer who watched the procession. “It is our tradition,” he added.

“There is a historical respect for Queen Marie, but it doesn’t really influence people’s opinions toward the monarchy today,” said Bogdan Murgescu, a professor of history at the University of Bucharest.

As the queen’s heart, escorted by two soldiers, went by, members of the crowd waved flags. The national anthems of Romania and Britain were played, while eight officers on horseback escorted the silver box, wrapped in a Romanian flag, to a waiting car. The heart was then driven 80 miles to its new — and it seems final — resting place.