Thousands of Muslims In Northern Iraq Converting to Christianity After Witnessing ISIS Horror, Ministry Reveals: 'They're Just Sick of Islam' 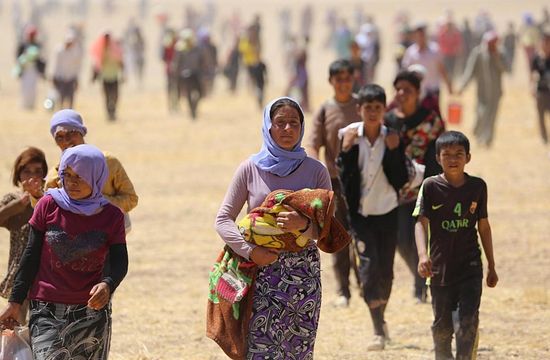 Numbers released by the UN in January estimated the Kurdish Region of Iraq is hosting 900,000 refugees, around 233,000 from Syria and the rest from elsewhere in Iraq. - See more at: http://www.gospelherald.com/articles/59309/20151030/thousands-muslims-northern-iraq-converting-christianity-witnessing-isis-horror-ministry.htm#sthash.wcmU3PwD.dpuf

More and more Kurdish Muslims living in Iraq are turning to Christ after witnessing the brutality of extremist groups like ISIS, who carry out horrific acts in the name of Allah, Christian aid workers have revealed.

A ministry leader in the Kurdish Region of Iraq told the Christian Aid Mission that his organization can barely keep up with the desire of refugees to learn about Christ and the Bible, which has grown increasingly strong since ISIS overtook many parts of the region.

"They're just sick of Islam," he said. "People are very hungry to know about Christ, especially when they hear about miracles, healing, mercy and love."

He added, "As terrifying and horrifying as ISIS is, they did us a great favor because they came and have shown them all the killing, saying that it's all in the Koran verses. So now we don't have to say much, we just say the truth."

Numbers released by the UN in January estimated the Kurdish Region of Iraq is hosting 900,000 refugees, around 233,000 from Syria and the rest from elsewhere in Iraq. As well as Kurds, who have fled northern Syria, the region has also accepted thousands of Arabs feeling the cities of Anbar province, which the terrorist group captured in 2014.

The ministry director revealed that his organization provides aid to displaced people in tents and whatever dilapidated or unfinished buildings they can find for shelter, with needs for blankets, heaters, food and diapers still being high.

After showing refugees the love of Christ by meeting their needs, aid workers later bring Bibles, he said.

The leader said there has a been a great "awakening" among Muslims in northern Iraq, citing many conversion accounts he has personally witnessed or heard secondhand from local churches.

He recalled one particularly memorable account, where a Muslim receiving aid from his ministry was given a Bible.

"He said, 'OK, but I'm Muslim, I can't become Christian - I have a big family, and my father is a very extremist radical,'" the director said. "I said, 'I didn't ask you to be Christian. I'm not trying to change your religion here. I just want you to read the Bible and know who Jesus Christ is. I want you to have a relationship with God.'"

The Kurdish Muslim agreed, and he began reading the Bible with his wife and their many children. Over time, the Muslim presented the ministry leader with a list of questions he had made while reading, and one day asked for information about the prophet of Islam.

According to the Christian Aid Mission, the surprised director, who normally does not talk about Islam, "gave him a token bit of information about Muhammad that did not include anything offensive about the founder of the religion."

The ministry director emphasized that the Word of God has the power to change lives with no embellishment. He recalled another instance, where administrators at a sharia (Islamic law) college requested 21 Bibles for a comparative religion class so they could equip Muslims with enough criticisms of the Bible to proselytize Christians.

"In a couple months, after they took that class going through the Bible, five of the students got saved," the ministry leader said. "They called me and said, 'Hey, we're done with Islam.'"

Upset by the conversions, the teacher alerted the authorities, who in turn summoned the ministry director. After being asked if he had tried to convert students, the ministry director explained that he didn't even know them, and had simply provided Bibles because the school had requested them.

The officer confirmed this with the teacher and asked the students why they had converted.

"One said, 'The Bible is strong, powerful; it changed our lives,'" the leader said. "Then the policeman said, 'Okay, then go, there is no case here; I can't do anything.' So he dismissed the guy and asked me, 'Is it true that the Bible has the power to change lives?' I said, 'Yes, of course. It's been changing lives everywhere.' He asked, 'Can I have a copy?'" A Russian Priest: My Work with English-speaking Converts
Archpriest Artemy Vladimirov
Fr. Artemy Vladimirov, an English-speaking Moscow priest from the Church of All Saints at Krasnoselskaya, has, for the past decade, been a mainstay for Western Orthodox converts living in Moscow and visitors seeking a deeper spiritual life. His staunchly traditional belief, deep insight, warm humor, and willingness to reach out to souls from diverse backgrounds, have brought more than a few foreigners to Orthodoxy. As the expatriate community has come and gone, Fr. Artemy has generously presided over numerous missionary dinners, high teas, and spontaneous talks—unforgettable gatherings that awaken souls and delight the spirit.
Comments

Purity Ngari4/19/2019 1:42 pm
We keep on our knees praying for the lsis to see their wrong behaviour that is causing untold suffering to their fellow muslims.All religions want us to love one another like brothers.O ly God gives life a d only God should take it.
Christians in lraq continue supporting those suffering as jesus did

BASHIR3/23/2018 8:55 pm
Sub: several Muslims are healed through prayers in Jesus' name
Dear Brothers & Sisters in the Body of Christ,
Greetings!
I am Pastor Bashir. I would like to share with you that I have found your email address by searching Google. I am very happy to share with you that several people has been touched and healed through prayers in Jesus' name within two weeks. Praise The Lord!
On 16th March (Friday), a Muslim lady Mrs. Sabina Bibi along with her sister attended for Friday worship service for the first time.
A Few Prayer Points:
** Mrs. Sabina Bibi is suffering by Tuberculosis. Pray for her that our Lord might touch & heal her.
** Mahosin’a mother (Muslim lady) came for prayer as she was suffer

Dear Director / Pastor / Brother / Sister in Christ,
Greetings to you in the name of our Lord Jesus’ name from India!
I am Pastor Bashir. I would like to share with you that our God has called me & my wife to reach specifically to the Muslims with The Message of God’s Love and establish Churches inside Muslim community. I and my wife both have surrendered our lives into His hands to be used according to His will & guidance in our lives.
Jesus is healing Muslim men, women including children through prayers. Even He is healing demon possessed persons through our ministry to Muslims. He is healing them form various types of diseases for the extension of His Kingdom in this part of the world.
Humbly, I request you kindly pray that God might constantly help us to be obedient, faithful, honest, humbleness and He might help us to live in His holiness. Please pray for His divine protection in our lives and in all the believers form Muslim background in our fellowship. We are having burden in our hearts to have PRIMARILY at least 1000 believers from Muslim background in our Church and to establish as many as House Churches inside Muslim community in my area by His grace & mercies.
Regards,
Bashir

Dhia abada11/15/2015 9:40 pm
With all our respect to Christianity which we consider as one of the holy religions,the Kurdish people in northern Iraq who allegedly converted to Christianity were already not Muslims ,they are from the not Muslim minorities. Moreover Isis they consider themselves Muslims ,but in fact they are not represent Islam in any way ,but just to deform Islam pushing by certain countries for political reasons.

David11/5/2015 4:15 pm
ISS is the product of one hegemonic idea in the middle east, that is islam. People should get diverse knowledge of religion. So they can decide what ever they want. Christianity has a room for other thoughts.This is also a human right issue in another way.
×