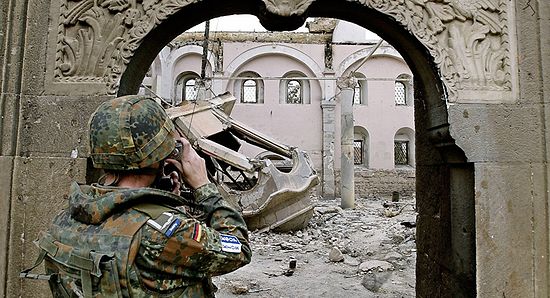 Hoping to foil Kosovo's attempt to become a member of UNESCO, ethnically Serbian student activists in the self-proclaimed state created a page on Instagram called “No to Kosovo's Membership in UNESCO.” There they posted photos of numerous Orthodox Christian places of worship and significance, including monasteries, churches and cemeteries, which were demolished in the years after ethnic Albanian Muslims gained de facto independence with the help of a deadly NATO bombing campaign and EU endorsement. Instagram responded by blocking the account for its “disturbing content.”

“We have been told that we are posting disturbing images, and we simply posted the truth -- the burning of Serb churches and monasteries, the holy places, the destruction of monuments, tombs, and so on,” Nemanja Bisevac, one of the account’s administrators, told journalists.

Jovan Aleksic, another administrator of the account and an activist with the protest group Students for Truth (Studenti za Istinu), told Sputnik Serbia he believes the Instagram page was suspended after a complaint from “those who are pushing the so-called Kosovo state forward to UNESCO.” pointing at the Albanian administration of the breakaway region.

The account was a part of a broader campaign dubbed “No to Kosovo's Membership in UNESCO.” led by Kosovan Serbian students, which hopes to deny Kosovo UNESCO membership.

“We have sent letters with photos and videos attached that speak for the destruction of the Serbian cultural heritage in Kosovo … to representatives of all 195 UNESCO member states. We’ve held a large protest in [the north Kosovan Serb town of] Sremska Mitrovica against so-called Kosovo becoming a member of UNESCO,” Aleksic said.

There is an online petition supporting the case.

Members of the UN cultural body UNESCO are expected to vote on Kosovo's entry into the organization on November 9.

Kosovo declared independence from Serbia in February 2008; Belgrade still considers it to be part of Serbia. Admission of Kosovo to UNESCO requires the support of two-thirds of the 195 members, 111 of whom have recognized Kosovo's independence.

A country or territory does not have to be a UN member or to have universally recognized status to enter UNESCO. Palestine, for instance, joined the organization in 2011.

Darko Tanaskovic, Serbia’s UNESCO ambassador told Sputnik Serbia earlier that the ideology of “Greater Albania” advocates the destruction of the remnants of Serbian culture and attempts to create a Kosovo culture which would appropriate everything on its territory. Over 100 Serbian Orthodox churches were destroyed in Kosovo between 1999 and 2004 alone, while the breakaway territory was administered by the United Nations. 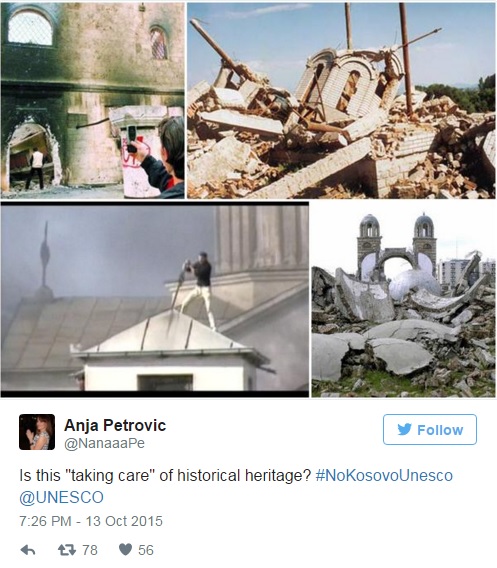 The United Nations Organization for Education, Science and Culture (UNESCO) was founded on 16 November 16, 1945; its World Heritage list includes 802 cultural sites of global significance. The only listed site in Kosovo is a series of monasteries and a church, mostly dating back to the Byzantine Empire. In July, 2006, UNESCO's World Heritage Committee included the Medieval Monuments in Kosovo in its Danger List, citing "difficulties in its management and conservation stemming from the region's political instability." 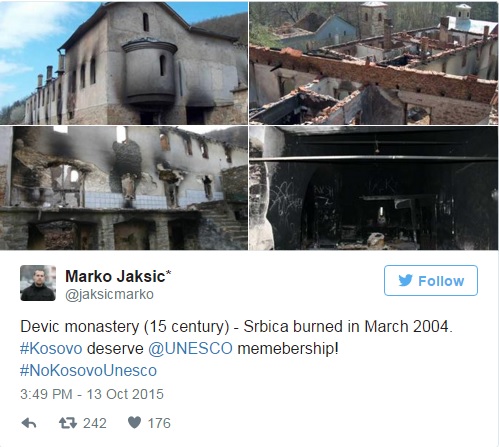 Association: UNESCO Has No Right To Give Serbian Churches To Islamic State

Association: UNESCO Has No Right To Give Serbian Churches To Islamic State
The Association of families of Serbs kidnapped and murdered during the clashes in Kosovo-Metohija (KiM) sent a note to UNESCO bodies on Monday, warning them that they do not have the right to hand over Serbian Orthodox churches and monasteries to the Islamic State and the protection of the terrorist Kosovo Liberation Army (KLA).

ChiRho11/18/2015 6:08 pm
What a shame the disrespect and destruction shown in the phots prove.
I would only add that the instability is not merely political, and the true driving force behing the destruction is not merely establishing Greater Albania. It is Islam. Everywhere this religion of AntiChrist gains a foothold these kinds of acts take place and Christian persecution (along with persecution of everyone else who does not bow to the Angel of Light) ensues.
Thanks to Pravoslavie for educating us on what the Western Mainstream journalists (and Istagram, Facebook, etc.) will not.
May the true God of the universe have mercy on Serbia.

Gerasimos kambites MD FRCPC11/7/2015 9:53 pm
They are the agents Of antichrist! Yes destroy ourHoly Places and make sure on judgement day bring your tools.
×