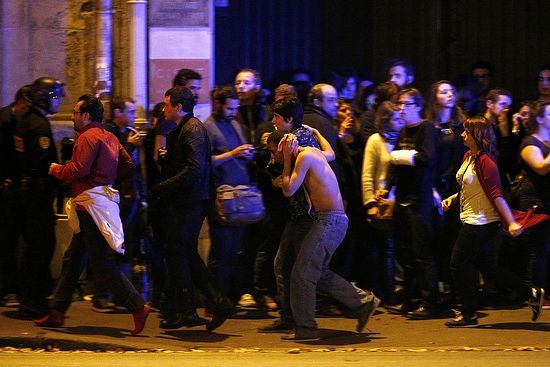 On the evening of November 13, 2015 Paris was rocked by a series of coordinated terrorist attacks throughout the city, leaving more than 120 innocent victims dead and more than 200 injured. Four gunmen killed at least eighty-seven young people attending a rock concert, and some forty more were killed in five other attacks. ISIS has claimed responsibility for these horrendous attacks.

In response to this terrible suffering, Church and governmental leaders from throughout the world have offered messages of condolences and solidarity to the French president and people:

His Holiness Patriarch Kirill of Moscow and All Russia:

The news about a series of terrorist actions committed in Paris has echoed with deep sorrow in my heart. As a result of this evil deed, hundreds of people have been killed and wounded. On behalf of the Russian Orthodox Church, I would like to extend my sincere condolences to you and all the people of France.

Terrorism brings innumerable disasters, crashing people’s lives and seeking to sow fear. Standing in its path must be a resolute will that overcomes the existing differences and mobilizes countries and people for joint courageous resistance to this evil.

I pray to the All-Merciful Lord that He may give rest to the souls of the innocent victims, a speedy recovery to the wounded and consolation and fortitude to their families, relatives and loved ones in the trial that has befallen them.

His Holiness Patriarch Irinej of Serbia:

News on last night’s terrorist attacks at many locations in the capital of the Republic of France, Paris, has deeply disturbed Us. On behalf of the fullness of the Serbian Orthodox Church as well as on Our own behalf, please accept sincere condolences. In these moments Our prayers and Our thoughts are with the friendly and, to the Serbian people, always close French people.

We pray that God may repose the souls of all tragically killed, grant comfort to their families and relatives in their pain, a quick recovery to the wounded, and that the French people may overcome the current difficulties.

His Beatitude Patriarch Daniel of Romania:

With much grief and sorrow in our souls, we pray for the victims of the terrible terrorist attacks which took place in Paris on Friday evening, November 13, 2015.

May the All-merciful God grant rest to the souls of the departed in His peace and love, and may He console the bereaved families and grant good health to the wounded!

At the same time, on behalf of the Romanian Patriarchate, we express our profound feelings of compassion and solidarity towards the French people who are passing through great trials.

We felt pain and suffering in our hearts when we heard the news about the terrorist attacks on the evening of November 13th, 2015 in Paris.

We express our deep grief for this macabre event.

In these moments we share the pain of the dear French people.

Once again we condemn every form of violence, fear, and terrorism from where so ever it may come.

We extend our condolences to the families of the innocent victims.

May God rest their souls and give peace and hope to their families.

The Assembly of Canonical Orthodox Bishops of the United States of America:

With heavy hearts, the members of the Assembly of Canonical Orthodox Bishops of the United States of America offer their prayers for the people of France who mourn the tragic loss of life that resulted from last night’s terrorist attacks in Paris. We convey our deep condolences to those who have lost loved ones, and we beseech the Lord Jesus Christ to grant a speedy recovery to those injured and eternal repose to those who have fallen asleep. Our thoughts and prayers are also with the civic authorities and the men and women of law enforcement agencies who are working to bring about peace and stability once more to France and her people. We extend our fraternal solidarity to all people of good will who pray and labor for peace, especially our brother Orthodox Christian Hierarchs in France. We condemn these barbaric acts against humanity, and during this worrisome time we draw strength from the words of St. Peter, who encourages us to cast all of our anxieties onto Christ, because He cares for us (1 Peter 5:7).

On behalf of the Orthodox Church in America, I offer my condolences to the people of France, to the citizens of Paris, and to the President for this terrible tragedy endured in the land of France. We offer our prayers that indeed such events will cease and that people will come to reason and to understand that life is important and death accomplishes nothing, certainly not senseless death.

Today the whole civilized world is yet again in shock, indignation and mourning. I express, on behalf of the Holy Eparchial Synod and the entire Greek Orthodox Archdiocese of America, our unequivocal condemnation for these horrific acts of violence and terrorism in Paris. We, here in America are no strangers to such acts of terror and violence. We stand together in pain and prayer with the people of France, the families of the victims, and our Orthodox hierarchs, clergy, and the faithful members of our communities in Paris. We stand together with each other as we ask our Lord and Savior Jesus Christ to help us get thorough this unthinkable tragedy and to guide and strengthen us. As we face the aftermath of this despicable event, we are encouraged by the words of the Apostle Paul: neither death, nor life…nor things present, nor things to come, nor powers…nor anything else in all creation will be able to separate us from the love of God in Christ Jesus our Lord (Romans 8:38-39).

The Kremlin said in a statement: "Vladimir Putin sent his deep condolences to President of France Francois Hollande and all the people of France following the horrible terrorist attacks in Paris. Russia strongly condemns this inhumane killing and is ready to provide any and all assistance to investigate these terrorist crimes."

"We share the sorrow and pain of the French people. Terrorists are not and cannot be excused. The tragedy in Paris requires us all to unite in hte fight against extremism, and to provide a firm and decisive response to terrorist raids," Medvedev said, offering condolences and support to the families of the victims and also wished the quickest recovery to the injured.

All of Georgia was moved by the brutal terrorist acts in France that killed many people. This is a crime against all of humanity. The people of Georgia and I stand by you and express our firm solidarity to you in your efforts against terrorism. Please convey my sympathies to the families of those who were killed and I wish a speedy recovery to all those who were injured. Terror by the minute

Terror by the minute
Across Europe, Africa, and the Middle East terrorist attacks unfolded seemingly simultaneously in January, a product of bigger, better-financed Islamic jihadists driven by a singular ideology. ‘The West is duly terrified. But it should not be surprised’.
Comments

Sally I,off11/29/2015 8:33 am
I agree let pray to God for all dead, for all victims and their families. God give piece to the souls, and the families, please Dear Lord!

Patricia11/16/2015 8:27 pm
Our family sends our deepest sympathy to all the people in France and the families who lost loved ones to this herrific terrorist attacks.

These people who attacked France have no right to be alive. I dont understand how any human being could be this evil. I hope all those involved in Isis are punished and receive either life in prison or death.

No one that had left there country to go to Syria involved in Isis should not be aloud back in there country or any other country. They should all rott in Syria.

We are sickened by these attacks and just remind us of 911 all over again. Its ashame you can't feel safe anymore going out.

Again we just want the French to know how we send our deepest sympathy.

eyob selassie11/14/2015 9:47 pm
We are shocked and saddend that so many innocent have been killed in could blood,really our heart feels broken, LET'S PRAY TO GOD FOR ALL THOSE WHO HAVE BEEN KILLED !!

Kate11/14/2015 8:36 pm
I was much encouraged by the response of the Russian Orthodox Church and Russian Leaders. God Bless you in your stance against Islam.
×