Over 100 Year Old Church To Become Site For Tourists

Board Member Wayne Arseny explains the first wave of Ukrainian immigrants that settled in Manitoba in 1896 built St. Michael's Ukrainian Orthodox Church, the first Ukrainian church in North America. The church was consecrated on October 14, 1899 and Arseny says it took them a few years to complete because the entire church was built by hand.

"You have to look at the era," notes Arseny. "It was 1896, new immigrants coming to a new land that was basically not settled. In order to build a church they had to use the resources available to them. There was very few trees available, no lumber yards or places to buy materials. So everything was made by hand including the artifacts, furniture, icons and cross inside the church. So the construction you see is very unique to this part of the world." 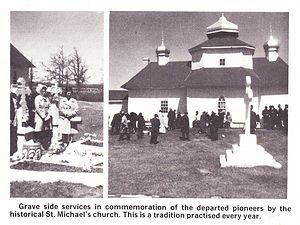 Photo courtesy of Wayne Arseny
Already a Provincially Designated Historic Site, Arseny says they have been doing historically accurate restorations to the building, having just finished the cedar roof and looking to work on an interpretation of the cemetery next year. He notes the installing the cedar shingles was a challenging feat due to the roof not having a standard pitch and having to go around the bell towers, however, he adds there are resources and contractors available who are able to complete this type of historic work.

The church was used actively until 1935 but Arseny says there is still a pilgrimage service held once a year.

"Tradition was that they would start in Gardenton and they would walk the three miles to this particular site and finish the service here," he explains. "Tradition, I think, is important. We're depicting history as what life was like and it's a tradition carried on. It's an enlightenment of what traditions and what culture was like in different parts of the world and here in southern Manitoba."

Arseny adds the hope in creating a site where tourists come to, is they will then visit other communities and historic sites in the RM of Stuartburn and the rest of southeastern Manitoba.

"So the restoration and the upkeep of this building is an ongoing maintenance project but a pride for us to participate in for the betterment of Manitoba as far as tourism in this part of the world." 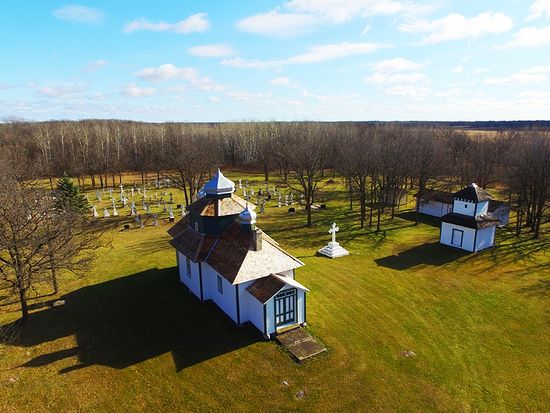 Sifton, Manitoba's historic church destroyed by fire
On Wednesday night, September 8, 2010, the hamlet of Sifton lost one of its landmarks as Holy Resurrection Orthodox Church burned completely to the ground.