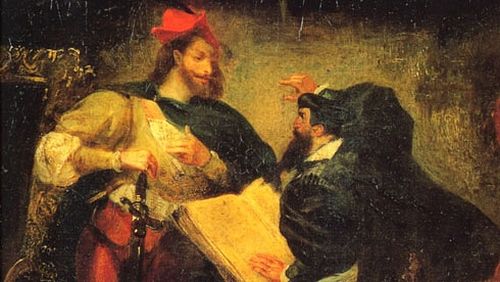 "Faust and Mephistopheles", by Eugеne Delacroix (1826-27). The Wallace Collection (London)

In its spiritual life, the human soul is confronted with two options, to seek the realization and actualization of its divine nature, or to be overwhelmed and rendered inert by the lower, transient things of the world. The 4th century Greek theologian St. Gregory of Nyssa once observed,

For those who look towards the true God receive within themselves the characteristics of the divine nature; so too, those who turn their minds to the vanity of idols are transformed into the objects which they look at, and become stones instead of men. 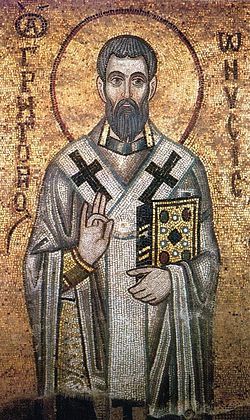 St. Gregory of Nyssa
Saint Gregory never received the chance to witness the idols of modernity, which have far surpassed the the old stone and marble images of classical antiquity in their destructive transformational effects on the human spirit. Instead modern man has seized upon often-violent revolutionary ideologies and the sanctification of technology as the new idols he erected in the temple of his heart. In the last century, modern man found himself pursuing theressentiment-driven mass violence of the Bolsheviks and methodical brutality of fascism. In our present era, meanwhile, he has settled razing entire countries to the ground in the name of freedom and democracy, and destroying ancient social traditions and institutions in the name of equality and social justice. The nihilistic revolutionary in this case does not become merely as stone, but something far worse, the “demons” described by the Russian novelist Fyodor Dostoevsky.

Proud modern man pursues his Faustian deal with the technological Mephistopheles, hoping that he’ll be saved from death, or at the very least saved from the expansive boredom and emptiness of the modern world. Enthusiastically he adapts himself to his electronic gods, not just in his social dealings, but spiritually as well, becoming the biological android so desired by transhumanist charlatans like Ray Kurzweil.

So in his technological and scientific progression, man is continuously becoming less of himself, or at least less of what he could potentially be were he to pursue his higher self. Indeed, similar to the companions of Odysseus who were transformed into swine by the witch Circe, modern men are reduced to a slothful and bestial state, the spell cast by their over-reliance on technology and an accompanying spirit of mindless consumerism.

Such is the condition of modern man, who has cast God out from his heart and pressed forward his technocratic society. We must grapple with a condition in many ways far worse than anything endured by an ancient nature-worshiping pagan, who still had at least some vague awareness of transcendent reality. Yet Faust’s spiritual heirs, holding aloft their banner of sacred scientism, will tolerate no dissent even in their conscience; their souls are as dead as the matter that dominates their arbitrary empiricism.

Contemporary man can no longer face God, because, as the British author and theologian C.S. Lewis pointed out, he no longer has a face, merely a void-gazing simulacrum. And that is the crux of the matter. Until he finds his lost face, the divine image buried deep in his afflicted soul, he will forever be turning from one false idol, one false form to the next, never able to escape the cave in which he has imprisoned himself.

Soul of the East Where does humanistic culture lead?
St. Justin Popovic
St. Justin Popovic survived two world wars in Serbia, and in this treatise on European culture he discerns the problems with the European worldview that led to such a human disaster, and touches upon the probable future.
Comments
×