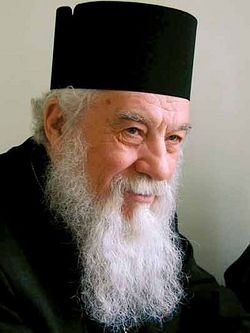 Fr. George Calciu
I had been searching for a spiritual father for some time when someone said, “Why don’t you ask Fr. George Calciu? He lives only an hour away.” I was astounded; I had read his “Seven Sermons to Youth” and admired him, but I thought he still lived in Romania. I learned that he was pastor of Holy Cross Church in Alexandria, Virginia, while my church is Holy Cross Church in Baltimore, Maryland (both cities are near Washington, DC). I went to meet him for the first time on March 11, 1999. He was my spiritual father and confessor until his repose on November 21, 2006.

The thing that impressed me most about Fr. George was his persistent cheerfulness. Whenever we met, he was happy, and gave me such a big smile that his eyes were almost squeezed shut. He would hold my hand and talk with me animatedly, as we stood in the nave of his church. He was full of joy, and I wondered how that was possible after such terrible suffering.

So I asked him once how he managed to stay so happy, given the horrors he’d survived. He replied that he had always been cheerful, even as a child. He was the youngest of eleven children, the “baby” of the family, and very close to his mother. He told me that he felt his mother’s prayers even after her repose, when he was in prison.

Once, he said, prison officials told him, “Your wife has divorced you and your son has renounced you.” He had no way to know whether this was true or not. He was very distressed, and said to his mother in his heart, “You told me you would watch over them! Now even you have abandoned me.”

But that night she came to him in a dream, and looked at him reproachfully. She asked, “How could you ever think that I would abandon you?” The next morning Fr. George’s wife and son were at the prison asking to see him, and assuring him that the rumors were false, and that they loved him and would never leave him. 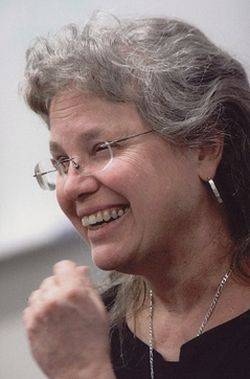 Frederica Mathewes-Green
I think that Fr. George’s mother planted something joyous in him, when he was still a baby in the cradle. Her love and her delight in him took root, and grew as strong as an oak tree. That strength was there when he needed it to carry him through his trials. When I saw Fr. George smiling, I would think that I was not looking at his smile alone, but at his mother’s smile, the smile he saw when he looked up into her face as a baby. It was the smile that was reflected in his eyes, when he gazed as his loving mother.

Young mothers know that it can be exhausting to care for a baby, and some days the rewards for this labor seem very far away. But we should keep in mind that we are taking care of the child not just for that one day, but for a lifetime. What we do on any ordinary day lays a foundation of strength that the child will draw on all his life. We do not know where our children’s lives will lead them; they may have to undergo suffering that we will be unable to prevent. They may be somewhere far beyond our ability to help them. But in the loving care we give each day, we plant something for a lifetime. Each small thing we do can be preparing them to meet challenges that we cannot yet see. Fr. George’s smile was a testimony to the power of the Holy Spirit, and to his own courage and faith. But it was also a testimony to his mother’s love. Romania Places the Heart of a Queen in Her Castle
As the queen’s heart, escorted by two soldiers, went by, members of the crowd waved flags. The national anthems of Romania and Britain were played, while eight officers on horseback escorted the silver box, wrapped in a Romanian flag, to a waiting car. The heart was then driven 80 miles to its new — and it seems final — resting place.

Mozaicon. Vibrant Romanian Mosaics
Mozaicon was started by a group of Romanian fresco artists who came together in 2008 to create the mosaics for the Patriarchal Cathedral Complex in Bucharest.
Comments
×