The Missionary Vision of the Martyred Fr. Daniel Sysoev

The following paper was written by a seminarian at St. Vladimir’s Seminary in Crestwood, NY for a course focusing on Orthodox missionary activity throughout the world in the Fall 2014 semester. 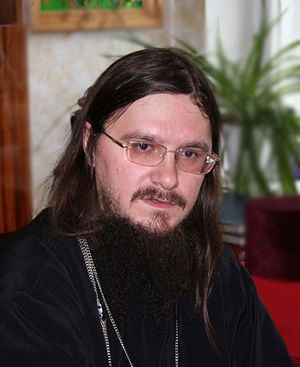 Fr. Daniel Sysoev
By all accounts, Fr. Daniel Sysoev was a powerful and effective missionary priest. According to his missionary companion and close friend, Prof. Yuri Maximov (now Priest Giorgy Maximov.—O.C.), Fr. Daniel turned “around 500 Protestants” to Orthodoxy and personally “baptized more than 80 Muslims” in his fourteen years of ordained ministry.1 He built a church community and mission center in an immigrant district in Moscow and had great success reaching persons of various ethnicities, nationalities, religions, and social classes.2 As a direct result of his efforts, and in accordance with his express desire and sense of calling, he crowned his ministry with martyrdom, being shot in the nave of his own church on the night of November 19, 2009.3

While Fr. Daniel did not leave behind extensive or systematic instructions for how to replicate his success, and the literature of the missionary center he founded remains largely untranslated, a number of his translated interviews and books are available online4 and can be used to form an outline of the principles which lay behind his ministry, as well as the methods which he used and found successful.

Fundamentally, Fr. Daniel’s missionary activity found its most basic principle in an extreme faith in the reality of eternal life and eternal judgment. When viewed from the perspective of an eternal destiny, actions in this present life gain a new significance; temporal life becomes “a school” where the human being is to prepare himself for “true life,” which “begins after the Final Judgment.”5 As such, it behooves every Christian to intentionally live a life that prepares him for eternity and to continually meditate on the transitoriness of earthly life and the inevitability of facing death and judgment.6 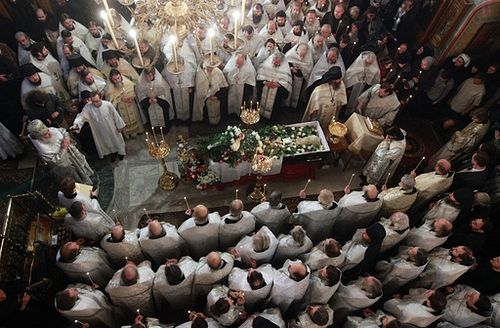 The funeral of Fr. Daniel Sysoev

While Jesus has “earned paradise for us” by his death on the Cross and Orthodox Christians have “receive[d] salvation as a gift through baptism,” they still need to “assimilate” its reality to themselves by living a Christian life that is characterized by continual repentance, frequent Communion, and the performance of “good deeds”, which fulfill Christ’s commandments.7 If the Christian does not busy himself with repentance and thereby assimilate the salvation of baptism to himself, he runs the risk of his post-baptismal sin becoming a sort of “second nature” which would sever him from Christ and make him “incapable of entering into eternity.”8

Following a common interpretation of the writings of St. Cyprian of Carthage, Fr. Daniel taught that, “outside the Church there is no salvation,” and anyone who does not “come into the Orthodox Church will perish forever.”9 In his view, this included anyone who was outside of the formal boundaries of the Orthodox Church, including Roman Catholics, Protestants, and Old Ritualists.10 (Indeed, so strong was his view on this subject, that he claimed that “heresy” and “schism” were the only sins that a martyric death would not “wash... away.”11)

Thus, because no salvation can be found outside of the Orthodox Church, it behooves the Orthodox Christian to attempt to witness to his non-Orthodox neighbor out of sincere love and mercy. To do this is to follow the command of Christ that every believer should “love [his] neighbor as [himself]” (Luke 10.27) and to carry out the great commission given directly in Matthew 28.18–20 and (in Fr. Daniel’s interpretation) Acts 1.8.12 If one cannot begin to do these things out of sincere love and altruism, then one should at the very least do them out of fear and obedience, since:

[T]rue Christianity is having pity for the perishing people. Fear to be punished by the Lord for burying one’s talent and desire to receive great reward in heaven—these are what must move a missionary.13

Therefore, for Fr. Daniel, any Orthodox Christian who would outright reject the duty of the Christians to evangelize shows a “disregard for the Judgment of God” and is practicing a sort of spiritual sin of “criminal omission” by not “rendering help to the perishing.”14 Such sins are inherently soul-destroying and will lead to condemnation on the Day of Judgment. Thus, while missions are in no way beholden to a quota system, and it is not a Christian’s job to “convert” anyone, it is a fundamental responsibility of Christian communities to produce missionaries in order “to be a witness” to the truth of Jesus Christ and to offer salvation to their neighbors.15 Anything less would be sinful and unloving. 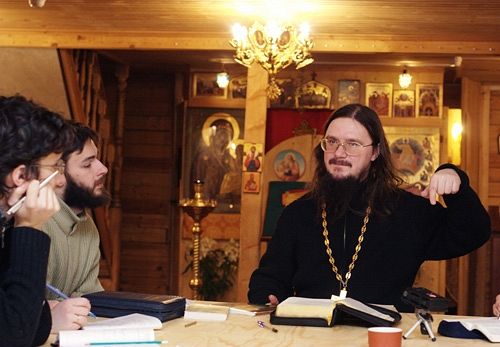 Because of such convictions, Fr. Daniel organized his community very intentionally with the aim of promoting missions. Under his priestly supervision, he trained lay persons of both genders to act as street preachers for the Gospel. Such preachers would undergo a yearlong course of study that would cover aspects of Scripture and Orthodox dogma, the mechanics of how one might approach people on the streets, and common objections to Orthodoxy raised by various groups. While Fr. Daniel and other clergy associated with his parish engaged in street evangelism, he found overall that “lay missions were ... the most successful” on the local level.16

The strategy that his missionaries were to employ was very direct. First of all, they were to invite people “to talk about God.”17 If someone didn’t want to talk or expressed disinterest, the missionaries were not to force the issue. If people were interested and receptive, they were invited to attend church. As a part of this invitation, Fr. Daniel had his missionaries carry small leaflets that addressed topics such as why Christians cross themselves or go to confession and communion. Critically, these leaflets always contained the address of a local church, so that those who were invited had a definite place to go.18

If persons showed sufficient interest, Fr. Daniel was not shy about having his missionaries broach major questions quickly. Even in the first conversation, they might ask nominal Orthodox if they wanted to repent, go to confession, and start receiving Communion. On the other side of things, they would ask the unbaptized fairly quickly if they would like to be baptized. Of course, not all people proved receptive to being engaged so rapidly, and Fr. Daniel noted that secular people, in particular, tended to need a more “unhurried” pace.19 Out of genuine concern for such people, Fr. Daniel urged accommodation and longer-term dialogue. If someone showed interest, he was not to be neglected or rejected.

Early on, Fr. Daniel and his lay missionaries often engaged in quite polemical and apologetic speech, as is typified in his book A Protestant’s Walk Through an Orthodox Church.20 However, later in his career, Fr. Daniel recognized that frequently one need not be polemical and raise and dispatch objections to Orthodoxy when dealing with the non-Orthodox. Often times, simply telling people what Orthodox Christianity actually is on its own terms proved to be enough.21

For Fr. Daniel, missions was not the work of an elect few, but the work of a whole community. Thus, it was not enough to have people go out and preach, but the local church had to have internal organelles geared toward the reception of those who had been reached. To this end, Fr. Daniel used catechism classes to prepare interested persons for baptism or reconciliation to the Church. In addition to completing catechism, he also required potential converts to read through all four Gospels and the Acts of the Apostles on their own before he would receive them into the Church. Obviously, going through this process indicates a great deal of commitment, and that is precisely what Fr. Daniel sought in converts.22

Baptism was not the end of the process of conversion for Fr. Daniel. After reception into the Church, there was an expectation that the new Christian would “enter into the life of the Church” by “studying Holy Scripture.”23 To this end, Fr. Daniel led a weekly Scripture class at his parish. He also, perhaps more significantly, organized his people into “Gospel circles.” These “Gospel circles” were groups of lay people who met regularly to study the Gospels together.24 Fr. Daniel clearly viewed active engagement with the Scriptures as essential both to the health of the local parish and to its missionary life.

Finally, it must be said that Fr. Daniel emphatically rejected any notion in the organization of missions that any particular local group should be targeted to the express exclusion of others. Thus, he had extreme contempt for those who would say things like “[f]irst convert your own people then go for others.”25 If he began to have success with a particular group, he would do all he could to facilitate conversions, such as when he began to hold certain services in the Tatar language in response to the many Tatars who had converted in his parish or when he began to hold special services for college students who were anxious about finals. However, he would never have seen the outreach of his church community as restrictively focused on any specific group or groups. To discriminate by age, ethnicity, or social class was utterly abhorrent to him. It was the duty of a Christian community, ultimately, to “witness to all” to the best of its ability.26 As the life (and death) of Fr. Daniel himself has shown, such witness requires determination, intentionality, organization, and a martyr’s courage.

Sysoev, Daniel. Instructions for the Immortal: or What to Do, if You Still Die. Moscow: Missionary Center of a Name of Priest Daniel Sysoev, 2012.

4 Since the writing of this paper many more of his books have been translated and are available from the Orthodox Internet Store of the Rev. Daniel Sysoev—O.C.

6 Daniel Sysoev, Instructions for the Immortal: or What to Do, if You Still Die (Moscow: Missionary Center of a Name of Priest Daniel Sysoev, 2012), 24. This tractate is available online at http://mission-shop.com/knigi_nashego_izdatelstva/3407-instructions-for-the-immortal-or-what-to-do-if-you-still-die-priest-daniel-sysoev.html.

11 Sysoev, Instructions, 27. One suspects that he has in mind lapsed Orthodox in making this claim. It is not clear what his views on those who were martyred for Christ but who had never been a part of formal Orthodoxy might have been.

12 Maximov, “Serbian Conversations, Part 2.” It seems quite possible to follow this logic, even if one understands the limits of the Church more broadly than Fr. Daniel did.

16 Ibid. Tragically, I have not found any place where he speculates as to why this might have been so.

20 A Protestant’s Walk Through an Orthodox Church is in many ways Fr. Daniel’s answer to Justin Martyr’s Dialogue with Trypho, a Jew. Written in the form of a dialogue, it raises and dispatches numerous objections that a typical Protestant in Russia might have to Orthodoxy and demonstrates the Scriptural foundation for Orthodox faith and practice. It is available online at http://mission-shop.com/knigi_nashego_izdatelstva/5637-a-protestant-s-walk-through-an-orthodox-church-priest-daniel-sysoev.html.

24 Ibid. Tragically, I was not able to discover what materials these groups might have used or how they might have been organized. The Synodal Cathedral of Our Lady “of the Sign” Hosts an Event in Memory of Priest Daniil Sysoev
The speakers shared their memories of Fr Daniil and his missionary service. At the end of the event, books and DVDs of the sermons of the martyred priest were offered for sale. “Don’t Be Afraid to Preach Christ”
Three men from the Caucasus region recount how Fr. Daniel Sisoyev influenced their lives.
Priest George Maximov
On November 20, 2014, five years passed since the day that priest Daniel Sisoyev’s life was cut short; he was murdered in the Church of the Apostle Thomas where he served. Many people remember him thankfully, and testify to how his words and example influenced their lives.
Comments
×