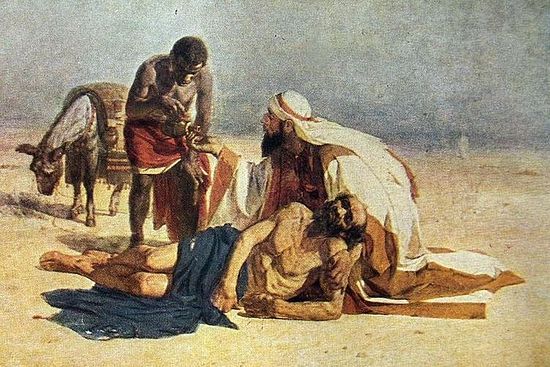 I want to revisit the Gospel lesson of Luke 10:25-37, the Good Samaritan, one more time to reflect on the current refugee crisis and what a Christian response might look like.

Just then a lawyer stood up to test Jesus. “Teacher,” he said, “what must I do to inherit eternal life?” He said to him, “What is written in the law? What do you read there?” He answered, “You shall love the Lord your God with all your heart, and with all your soul, and with all your strength, and with all your mind; and your neighbor as yourself.” And he said to him, “You have given the right answer; do this, and you will live.” But wanting to justify himself, he asked Jesus, “And who is my neighbor?” Jesus replied, “A man was going down from Jerusalem to Jericho, and fell into the hands of robbers, who stripped him, beat him, and went away, leaving him half dead. Now by chance a priest was going down that road; and when he saw him, he passed by on the other side. So likewise a Levite, when he came to the place and saw him, passed by on the other side. But a Samaritan while traveling came near him; and when he saw him, he was moved with pity. He went to him and bandaged his wounds, having poured oil and wine on them. Then he put him on his own animal, brought him to an inn, and took care of him. The next day he took out two denarii, gave them to the innkeeper, and said, ‘Take care of him; and when I come back, I will repay you whatever more you spend.’ Which of these three, do you think, was a neighbor to the man who fell into the hands of the robbers?” He said, “The one who showed him mercy.” Jesus said to him, “Go and do likewise.” 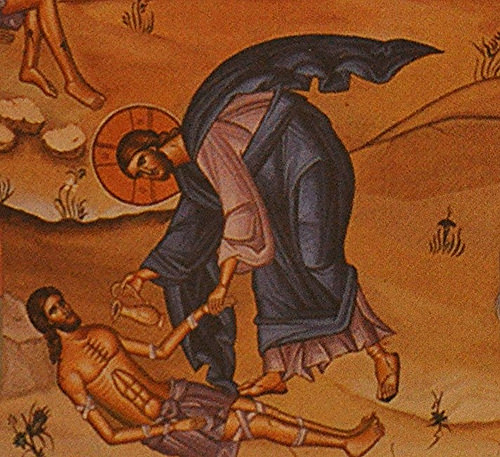 I remember once hearing a military chaplain reflect on the above Gospel parable. His question was, do Christians have to wait until the person is robbed and beat up before being the Good Samaritan? Do we have any ethical obligation to intervene and spare someone suffering rather than just wait for someone to be victimized?

The moral question is important. For the refugee crisis today, we Christians have opportunity to intervene and spare some people from being nothing but victims. We can intervene and help them now and not wait until the victims are devastated and re-victimized again and again. Some may argue that is what military action against the Islamic State is – pre-preemptive work to stop further suffering. I’m suggesting our willingness to care for fleeing refugees spares them further suffering and is an action we as Christians can take.

Christ’s Parable of the Good Samaritan represents His moral sense, and He teaches the parable to instruct us in what the morality of God’s Kingdom looks like for us Christians. We are to go and do as the Samaritan did – show mercy. That is how we become neighbors and fulfill the Gospel commandments.

Others, who we think should be the ones helping the victims of this crisis, Muslims for example, might walk around or away from the problem. That doesn’t justify our doing the same. We are Christians, and thus are taught by our Lord to be Good Samaritans. This is the Gospel commandment for us. We prove our faithfulness to Christ by living according to His teachings and commandments, not by comparing ourselves to Muslims or by taking actions that serve only to protect ourselves.

Christ told this parable exactly because Jews and Samaritans were enemies. Yet the Samaritan is the lesson’s moral hero. He is the hero because He does what is expected of any righteous person. The recognized religious leaders in the parable fail to do what we know was expected of them. Jesus wasn’t even teaching something new to the lawyer. He was simply illuminating what the Law said. The Good Samaritan follows Torah, even though he is not a Jew. Christ shows what St. Paul later would teach – “For he is not a Jew who is one outwardly, nor is circumcision that which is outward in the flesh;but he is a Jew who is one inwardly; and circumcision is that of the heart, in the Spirit, not in the letter; whose praise is not from men but from God.” (Romans 2;28-29).

Jesus tells this parable to remind one man that it was in his power to be a neighbor to others. He claimed to be willing to love neighbor, but then wanted to screen out those he didn’t want to be his neighbor. Christ catches him by surprise, for Jesus tells him that loving the neighbor does not begin in determining who the neighbor is bur rather begins with what is in our own hearts. What a Miser You Are, O Man!
Fr. Georges Massouh

What a Miser You Are, O Man!
Fr. Georges Massouh
Christians are called to be like their Teacher, not to make their teacher in their own image. They must be good soil, soil clear of stones and thorns. This requires struggle to purify one's self from the cares of this suffocating world. No one will come to clear another person's soil. Everyone is responsible for cultivating his own soil, for reforming himself. If he does not smash the stones within himself and if he does not pluck out the thorns within himself, he will not bear fruit and he will not be of any good to anyone. Don't let Muslim refugees in, says Bulgaria's Orthodox Church
Far right groups across Europe are calling for Muslims not to be allowed in amid a huge refugee crisis.