On November 20, 2015, Metropolitan Hilarion of Volokolamsk, head of the Moscow Patriarchate’s department for external church relations (DECR), addressed the united session of the Federation Council and the State Duma devoted to problems involved in the struggle against terrorism.

Met. Hilarion, emphasized that the perpetrators of these heinous acts are not religious but satanist, and all of us must transcend politics to form a united front against this current evil. 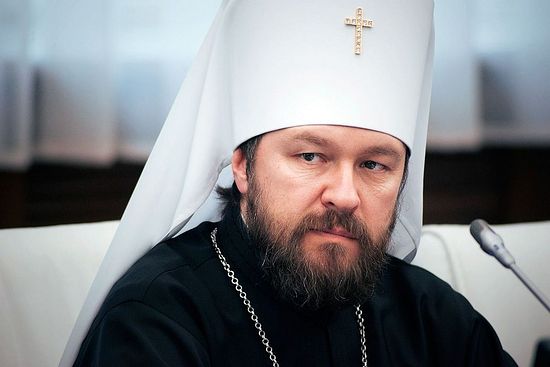 Esteemed Participants in the Session,

On behalf of His Holiness Kirill, Patriarch of Moscow and All Russia, and on behalf of the whole Russian Orthodox Church I would like once again to expressed deep, heartfelt and sincere condolences to all those who have lost their loved ones in the plane crash over the Sinai.

We must clearly realize that it is not a war of one religious confession against another. The very notion of ‘religious terrorism’ can only lead us astray. There is no religious terrorism whatsoever. Those who have unleashed this war do not deserve to be called the faithful. They are Satanists because they do the will of the Devil, bringing to people grief, death and destruction. They are cursed by both religious leaders of all confessions and ordinary people – believers and non-believers alike throughout the world. And the only way to cope with them is to destroy them systematically and purposefully, tracking them down wherever they are hiding and eliminating them collectively and individually, for each of them poses a threat to tens, hundreds and thousands of lives.

The whole world community must unite in the struggle against terrorism. The events of recent weeks have pointed to the acute need to create without delay a real mechanism for opposing terrorism on the global level. Actions are needed, not words. And contradictions among states and differences on political issues should be sidelined.

Let us recall the last great war. Citizens of the Soviet Union, America, Great Britain and France fought side by side in it. Weren’t there serious and profound contradiction among the countries of the anti-Hitler Coalition? But those contradictions were sidelined when it was needed to defeat the brown plague.

The time has come to rally against the new plague, to rally and to win.

But along with the destruction of the already existing armed bands, the most important task is to ensure the prevention of terrorism. And here it is necessary to establish another coalition – one that would unite secular and religious leaders. This coalition is needed above all in order to safeguard our people, especially the youth, against the influence of the criminal ideology which uses religious slogans as a cover.

War against terrorism is a war in the spiritual field. The principal frontline goes through people’s souls. For this reason, we should struggle against terrorism not only in the theatre of hostilities, but in the first place in the battlefield for souls and hearts.

The thing that happened to a student of a major state university, recruited by terrorists, should serve for us as a serious warning. If we do not take urgent measures, there will be many more such student girls and boys before long.

What are these measures? First of all, it is the education of children and youth for respect of traditional religions. It is no secret to anyone that extremism under the banner of religion is developed first of all on the ground of complete illiteracy with regard to religious matters, when people without conscience or positive moral guidelines claim as Islam what is not Islam and call upon people in the name of Allah to commit grave crimes running contrary to the very essence of religion.

It is time at last to decline the understanding of separation of the Church from the state and school from the Church which presupposes that religion should not be directly present in the secular education space. Today as never before the teaching of the Basics of Religious Culture is needed in school and this experience should be broadened. Our children must know the truth about religions, not the falsehood that Satanists dressed up as believers may inculcate in them.

We should complete the work to create the academic field of Theology in the secular education space with all the ensuing consequences including the right to be granted state-recognized academic degrees in this discipline. How does it bear on the problem of terrorism? Most directly. In the Russian context, theology – not secular, nor ‘super-confessional’, as some seek to impose on us after the western fashion, but bound to traditional confessions – may become a unique platform for cooperation among the traditional religions of our country.

Special responsibility lies today on the clergy of various religious confessions. An important role belongs to Islamic leaders who are called to tirelessly show to their faithful that what terrorists present as Islam is not Islam in reality.

It is necessary for the state and religious communities, through their common efforts, to promote the preservation of the traditional values in our people on which their life has been built for centuries. Young people in Europe could not be recruited in the ranks of militants so massively if spiritual values and the institution of family have not been ruined and if consumerism, sexual perversions and the ideology of profit have not been inculcated in them so consistently in the last decades.

Multiculturalism, so popular in Europe, presupposing not only the equality of all religions but also their absence from the public space, has fully exhausted and discredited itself today. Ideologically Europe has nothing to set against terrorists. It is only a Europe, strong and not ashamed of her roots and her own religious identity, that will be able to oppose fanatics who are so sure of their rightness that they do not spare their own lives to destroy the lives of others.

Russia has a unique role to play today. Millions of people in the Middle East are looking to Russia with hope. Indeed, they have pinned their hope on the West for a long time but have ended up with nothing. Russia has become a world leader today in the struggle against the plague of terrorism, and in this we see the historic role of our people brought up on Christian spiritual and moral values and ideals with full respect for the faithful of other traditional religions.

Yet because Russia has found herself in the forefront of the struggle with global evil, risks are growing too, as the tragedy in the sky over the Sinai showed. Bowing our heads before the memory of all the dead, let us give a promise today, no, not to avenge them but to do everything that depends on us to prevent such a thing from recurring.

Messages of Condolences and Solidarity with the French People
Church and Governmental leaders from throughout the world have sent messages of condolences to the French president and people.