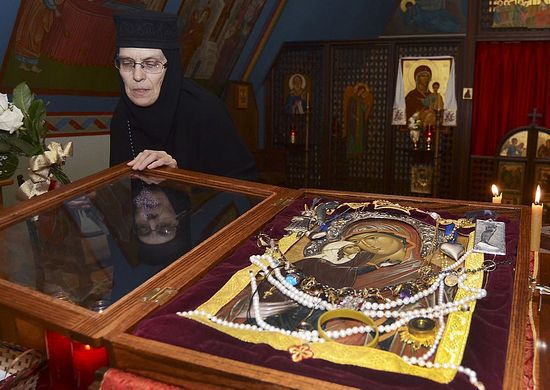 Mother Christophera of the Orthodox Monastery of the Transfiguration in Wayne Township opens a glass case to give a better view of the Icon of St. Anna on Saturday.

More than 300 people came to the Orthodox Monastery of the Transfiguration Saturday and Sunday to see the miracle working Icon of St. Anna and her daughter, the Holy Virgin Mary. The Icon was present in the chapel and people who came received a picture of the Icon and a piece of cotton with the blessed oil from the lamp that burns near the Icon. Rings, necklaces and other jewelry wreaths the icon, gifts from people who have received healing and answers to prayers.

Mother Paula Bellas said people came from as far north as Erie, all parts of western Pennsylvania and Ohio to pray and venerate the Icon.

"Many people, who are not Orthodox, came and we had the opportunity to welcome them and explain about the Icon," Bellas said.

Claudia Albers and her daughter, Sonja Anzivino, from Newton Falls, Ohio said they are Orthodox and come to the monastery a few times usually when there is something special happening.

"I just felt I had to come. I had to be here. It is such a calm place. When you come here you step out of the world," Sonja said.

"This is heaven on earth. I love it here and it is a spiritual shot in the arm," Claudia said.

The Reverend Archimandrite Athanasy, takes the icon all over the United States. He was present at the Divine Liturgy on Saturday, and his message was "Love each other and forgive." Father Athanasy, also, shared the story of the Icon of St. Anna which for him began when he was a child and fell out of a window. He broke his arm so severely that they thought they would have to amputate his arm. His mother, who was devoted to St. Anna, took him to a church dedicated to St. Anna and prayed. His arm was saved and he told the congregation that he is still using it.

From 1980 to 1981 Father Athanasy served at the Mount of Olives Convent in Jerusalem. While he was there someone gave him a gift of a thousand dollars and he commissioned the Icon of St. Anna, the mother of the Holy Virgin Mary, and when it was completed it was blessed at the Sepulcher of Our Lord in the Jerusalem Church of the Resurrection and brought to the Russian Orthodox Church of Our Lady of Joy of All Who Sorrow in Philadelphia.

On May 9, 2004, Mother’s Day, the Icon of St. Anna, the Mother of the Holy Virgin Mary, began to stream myrrh, an aromatic resin. One of the parishioners mentioned it to the parish rector, that the Icon of St. Anna seemed to be perspiring and he saw the visible liquid streams and droplets. Accumulations of the liquid were seen on the cuff on St. Anna’s left hand and on her left shoulder veil. Droplets were also found elsewhere on the Icon. This fragrant, slightly oily liquid is commonly called myrrh and at first it looked like tear drops as if St. Anna was crying. More recently small, slow-moving streams of myrrh have appeared on other parts of the Icon.

Since the fall of 2012, the Icon has been at St. Tikhon's Monastery in Waymart, Pa. and has a pleasing fragrance but is not currently weeping.

On Sunday the Icon and Fr. Athanasy left the chapel immediately following the 9:30 a.m. Divine Liturgy and traveled to Michigan where others would have the opportunity to venerate the Icon and pray.

"Where She Goes She Brings Peace and Love"
An Interview About the Wonder-Working Icon of St. Anna
Frederica Mathewes-Green, Archimandrite Athanasy (Mastalski)
St. Anna was indeed our ambassador of good will. We know that she is the grandmother of Christ, and she traveled to be everyone’s grandmother. The Skete of St. Anna on Mt. Athos

The Skete of St. Anna on Mt. Athos
Today the Church celebrates the Dormition of Holy Righteous Anna, the Mother of Mary the Birth-giver of God. This is the day that St. Anna departed this world. The monks of Mt. Athos, the reigning Abbess of which is the Most Holy Theotokos, have always had a special veneration of St. Anna.

An Icon of the Mother of God is streaming myrrh in a Turkish family in Paris
According to the Altindagoglus, the icon was given them in 2006 by a Greek monk from Libya. As soon as they received this icon they felt its great holiness and an unexplainable atmosphere of peace has reigned in their home since then.
Comments
×