Patriarch Kirill: the place of the Church in our history is often underestimated

On November 18, 2015, the international conference, “Prince Vladimir. The Choice of Civilization”, was opened at the assembly hall of the Sts. Cyril and Methodius Theological Institute of Postgraduate Studies in Moscow. His Holiness Patriarch Kirill of Moscow and All Russia presided over the opening ceremony and delivered a speech to the conference members. Among other things, His Holiness said the following: 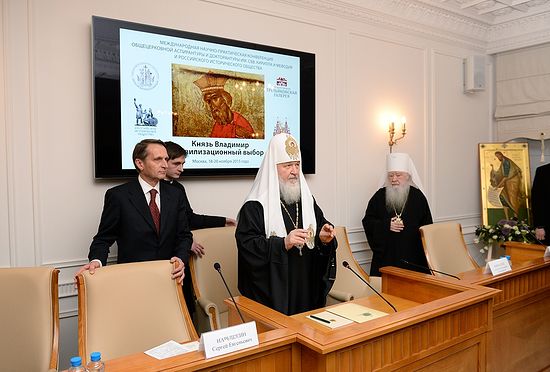 We have to note with regret that the place of the Church in the history of our people is still often underestimated or inadequately estimated. When reading most works of research one may get the impression that Russian history developed without the Church, without its participation, as if the Church gave Russia neither heroes nor saints nor any outstanding state figures. Authors of such works devote their main attention to political events or economical achievements, while the spiritual sphere of the nation’s life is largely ignored.

This state of things came about because of the inertia that has been continuing since the Soviet era, when our entire history was portrayed as a sequence of episodes in the centuries-old “class struggle” that culminated in the October Revolution. Yes, everybody knew about Stenka Razin, Bolotnikov, Pugachev, “Yuryev Day” [various rebellions in Russian history.—O.C.], but there was little awareness of the geniuses of spirit, the outstanding personalities who in many ways shaped the nation’s worldview. Awareness of the role of Orthodox Christianity in the country’s life was suppressed.

Today I recall one event that occurred 55 years ago, at the height of the so-called “Khrushchev Thaw”, which was accompanied by a new period of persecutions of the Church. Then one of my ever-memorable predecessors, His Holiness Patriarch Alexis I (Simansky), at the International Disarmament Conference at the Moscow Kremlin ventured to remind everybody of the historical role of the Russian Church, its contribution to the creation of Russian statehood, and to the development of arts and education. Let me quote a part of his historic speech.

“It is the Russian Orthodox Church that unites millions of Orthodox Christians, which is speaking to you through me,” said the Patriarch, addressing those gathered at Kremlin Palace. “History shows that it is the Church that at the dawn of Russian statehood contributed to the establishment of civil order in Russia, strengthened the legal foundation of the family by its Christian instruction, proclaimed the legal status of women, condemned usury and slaveholding, cultivated a sense of responsibility and duty in people, and by its law often filled the gaps in national legislation. This is the very Church that created the wonderful monuments that enriched Russian culture—and they are the national pride of our nation to this day. This is the very Church that at the period of the appanage principalities in the Russian land furthered unification of the principalities into one state. It upheld the meaning of Moscow as the principal Church and civil center of the Russian land. This is the very Church that during the Tartar Yoke appeased khans of the Golden Horde, protecting the Russian people from new raids and ravaging. It was our Church that then strengthened the spirit of people by faith in future liberation, maintaining the sense of national dignity and the mood of moral concentration. It gave support to the Russian state in the struggle with the foreign invaders during the Times of Troubles (1605-1613) and later, in 1812, during the Napoleonic War. And it stayed with the people during the last, Great Patriotic War (World War II), with all its strength working for our victory and for peace. In a word, this is the very Russian Orthodox Church which throughout the centuries contributed to the moral formation of our people, and also in the past—to the formation of our state system.”

It was no coincidence that the Patriarch publicly addressed the people with these words. The Khrushchev’s era persecutions were beginning at that time. Many churches, monasteries and convents were closed, many clerics were arrested; however, unlike the 1930s when the clergy were subjected to repression as an alien element, early in the 1960s the authorities wrongly accused them of various vices and financial crimes in order to arrange “show trials”. And these words of Patriarch Alexis I sounded like a bolt from the blue sky. The party leaders were obviously not prepared for such a public apology of the historic role of the Church, which for so many years had been ferociously attacked, slandered and humiliated. The chairman of the Council for Religious Affairs Karpov was immediately fired; the resignation and tragic death of the probable author of this speech, Metropolitan Nikolai (Yarushevich), followed; and a series of punitive measures were taken by the Soviet authorities against the Church.

The voice of His Holiness Patriarch Alexis I in those years was “the voice of one crying in the wilderness” (Mat. 3:3). However, the primate spoke about things which should be obvious for all who want to look at our history without bias.

And many people still do not know what Patriarch Alexis I said at that conference. These facts are still passed over in silence; for example, they are not mentioned in history textbooks at our schools. Was Liberation Theology Created by the KGB?

Was Liberation Theology Created by the KGB?
According to Pacepa, liberation theology had its beginnings in 1959-60, with Soviet premier Nikita Khrushchev’s plans to export Soviet communism to Latin America, and to infiltrate and co-opt worldwide Christianity.