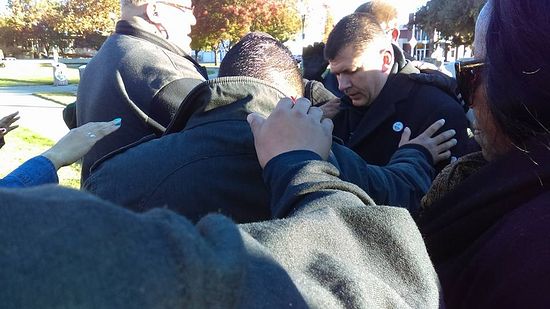 An atheist group is threatening to sue a California town for hosting a 12-hour prayer rally on the steps of city hall the day after a 6-year-old girl was shot last week and for planning to host a town hall meeting at a church facility.

The American Humanist Association, a Washington D.C.-based legal group, sent a warning letter to Stockton, California, Mayor Anthony Silva last Thursday on behalf of the Stockton Area Atheists and Freethinkers informing him that he violated the Constitution by holding and organizing a prayer rally last Monday on city property.

Before the 6-year-old girl was shot and wounded during a senseless drive-by shooting last Sunday, Silva had already been organizing a "Prayer Rally for Stockton" in hopes of uniting the community, promoting peace and ending homicidal violence that has claimed at least 40 lives in the city this year.

Silva used his official mayoral capacity to alert media and residents about the Nov. 16 prayer rally through his official social media posts, emails and press releases sent on Nov. 11.

At the rally, the mayor encouraged citizens to pray and even led attendees in prayer. He also awarded God the honorary key to the city. The key was presented in a glass casing that had the words "GOD we dedicate the city of Stockton to you!" inscribed at the bottom.

"Mayors and other public officials cannot use the machinery of the state to push their religious agendas," AHA senior counsel Monica Miller said in a statement. "Using the state to promote prayer violates the Establishment Clause of the First Amendment and alienates community members of minority faiths and of no faith."

Despite the humanist group's claim that Silva did not have legal authority to sponsor a religious event, Silva maintains that he acted within his rights.

"As long as there is crime and homicides in Stockton, I'm going to continue to lead the city in prayer," Stockton asserted in an interview with an NBC affiliate. "I don't think I did anything wrong."

"There is similarly no secular purpose for holding 'town hall' meetings in religious Christian venues, especially when there are ample secular government venues available," the letter reads. "And clearly, there is no secular purpose in having a city-sponsored town hall meeting 'hosted' by a Christian organization. The city's 'rejection of the alternative of wholly secular [venues] makes it very clear' that its purpose of holding the town hall meetings in churches is 'religious.'"

"This letter serves as a notice of the city and mayor's unconstitutional activity and demands that you terminate all promotion, sponsorship, endorsement or affiliation with Christian Life Center and any other religious organization immediately," the letter continues. "We also specifically demand that you find a secular venue for the upcoming town hall meeting and that you refrain from using Christian venues for such events."

David Diskin, a member of the Stockton Area Atheists and Freethinkers, told KCRA that they will give the city one week to respond to the letter to indicate that they will move the Nov. 30 town hall meeting to a secular location.

Silva assured that despite the threat of legal action, he will continue to give his constituents hope through prayer.

"My city had its 40th homicide. So we are in desperate need of immediate action," Silva asserted. "Residents want something done and want to feel safe, and if I have to give them hope and prayer, that is what I will do." Christian Outraged as Decades Old Jesus Portrait Is Forcefully Removed From Kansas School by Atheists
Kansas residents are outraged after an atheist group forced a local middle school to remove a portrait of Jesus Christ that had been displayed in the school since the 1950s. Atheism, Not God, is Odd

Atheism, Not God, is Odd
Closer to home, an analysis of the 2008 British Social Attitudes (BSA) survey by David Voas of the University of Manchester reveals that the historical correlation between being educated and being "non-religious" has not only weakened but reversed.
Comments
×