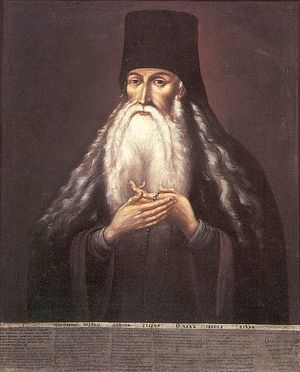 St. Paisius (Velichkovsky)
St. Paisius (1722-1794) was born Peter Velichkovsky in Poltava, Ukraine, to a priestly family. At age thirteen he entered the Kiev Theological School with the intention of following in his father’s footsteps, but felt there something missing—the monastic tradition of mental prayer and the patristic approach. He soon departed to find a monastery, and his search for true monastic instruction took him to Mount Athos where he labored for seventeen years, becoming the spiritual father to many monks. These years on Mount Athos were filled with labors in asceticism and study of the true monastic life. Greece was still under the Turkish Yoke, however, and this political situation eventually made it impossible for the elder and his disciples to remain on the Holy Mountain.

In 1763, St. Paisius and sixty-four monks moved to the Monastery of the Holy Spirit in Dragomir, Bukovina, Moldavia, where they restored the monastic life. Here St. Paisius began his translations of the holy fathers into Slavonic. Due to war and turmoil in that region, in 1779 St. Paisius was given the opportunity to move to Neamts, where he his brotherhood flourished, and he produced not only translations but also his own patristic texts.

Today, the day of his commemoration, is also the first day of the Nativity fast. We would like to begin this time of blessed preparation with a short instruction from St. Paisius on fasting in the monastic, Orthodox tradition, from his work, “Field Flowers”.

Fasting I call the eating of a little bit once a day. Getting up from the table when still hungry, having his food, bread, and salt, and his drink-water, which the springs themselves bring forth. Behold the royal way of receiving food, that is, many have been saved by this path, so the Holy Fathers have said. To refrain from food for a day, or two days, three, four, five, or a week, a man cannot do always. But, so as every day to eat bread and drink, one can always do this; only, having eaten, one should be a little hungry so that the body will be submissive to the spirit and capable of labors and sensitive to mental movements, and so the bodily passions will be conquered. Complete fasting cannot mortify the bodily passions as well as poor food mortifies them. Some fast for a time and then give themselves over to delicious foods, for many begin fasting beyond their strength and also other severe labors, and then they grow weak from the lack of measure and unevenness of this labor, and they seek tasty foods and repose for the strengthening of the body. To act in this way means to build and then again to destroy, since the body through thinness from fasting is yearning for sweet things and seeks consolation, and the sweet foods ignite the passions. But if someone establishes for himself a definite measure as to how much poor food to eat in a day, he will receive great profit. However, concerning the quantity of food, one must establish a rule that it be as much as is necessary for the strengthening of oneself. Such a one can perform every kind of spiritual work. But if someone fasts beyond this, at another time he will give himself up to repose. Ascetic labor according to measure is priceless. For certain of the great Fathers also took food in measure, and everything they used in its right time, and everything had measure-ascetic labors, bodily needs, cell possessions: everything according to a definite, moderate rule. Therefore, the Holy Fathers do not command one to begin to fast above one's power and to make oneself weak. Take as your rule to eat every day; thus one may refrain in a more firm way, but if one fasts more than this, how will he refrain later from eating to the full and overeating? In no way will he be able to. Such an immoderate beginning comes either from vainglory or lack of understanding, while continence is one of the virtues, which aids in the subjugating of the flesh. Hunger and thirst are given to man for the purification of the body, from preservation from unclean thoughts and lustful passions. Everyday to eat poorly is a means to perfection, as certain ones have said, and one who eats every day at a definite hour in no way is lowered morally nor undergoes any harm of soul. St. Theodore the Studite praises such ones in his instruction on the Friday of the first week of the Great Fast where he cites in confirmation of his words the Holy God-bearing Fathers and the Lord Himself Thus we also should act.

The Lord endured a lengthy fast, as did Moses and Elijah, but only once. And certain other ones sometimes when entreating something from the Creator, laid upon themselves a certain time of fasting, but in accordance with natural laws and the teaching of the Divine Scripture. From the activity of the Saints, from the life of our Savior, and from the rules of those who have lived in good order, it is evident that it is splendid and profitable always to be ready and to be found in ascetic labor, in work and in endurance; however, not to weaken oneself by immoderate fasting and not to bring the body into a state of inactivity. If the flesh is inflamed because of youth, one must refrain a great deal; but if it is infirm, one must take much or little. Look and judge according to your own infirmity as to how much you can do. To each one there is a measure and the inward teacher is one’s conscience; not everyone can have the same rule and same ascetic labor, because some are strong and others are weak. Some are like iron, others are like copper, while others are like wax. And thus correctly discovering one’s own measure, take food once each day, apart from Saturdays, Sundays, and great feasts of the Lord. A moderate and sensible fast is the foundation and chief of all virtues. One should fight evil as one fights a lion and a fierce serpent—in the infirmity of the body and spiritual poverty. He who wishes his mind to be firm against defiled thoughts should make his body refined through fasting.

It is not possible, without fasting, to serve as a priest. As it is indispensable to breathe, so also is it to fast. Fasting once having entered into the soul, kills to the depths the sin which lies therein. Archpastoral Letter For The Nativity Fast 2015
Bishop Gregory of Nyssa

Archpastoral Letter For The Nativity Fast 2015
Bishop Gregory of Nyssa
"With all of us united in prayer and laboring for peace this Nativity Fasting Season, I am convinced that we will help, even if only in a small way, to make our lives and that of the world more peaceful." The Rule of Fasting in the Orthodox Church
Hieromonk Seraphim (Rose)
In answer to numerous requests from readers, the rule of fasting is given for each day of the year.