On November 15/28 we commemorate the blessed respose of St. Herman of Alaska. There exists a long-standing tradition to celebrate his repose on December 13/25, but this is most likely the date of his burial. Following St. Herman's repose there arose terrible weather and his body could not be reached on Spruce Island for a month, and due to poor record-keeping this date passed into history as the date of his repose. December 13/25 remains a celebration of St. Herman, while many places also commemorate his repose on November 15/28, such as the St. Herman of Alaska Monastery in Platina, CA. 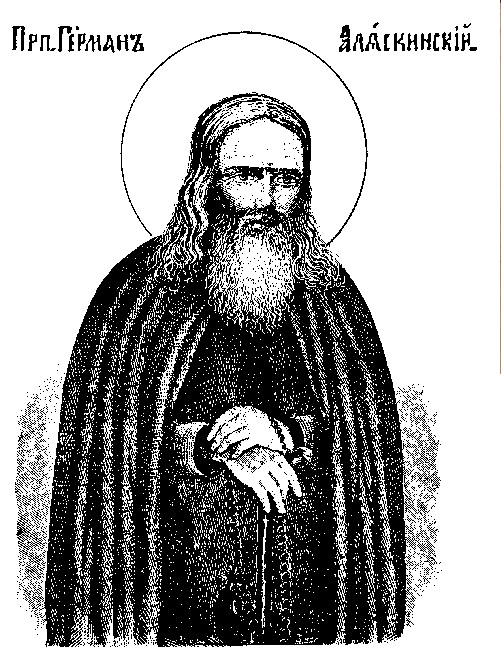 “After my death,” Father Herman used to say, “there will be a plague and many people will die from it, and the Russians will join with the Aleuts.” And truly, evidently half a year after his death there occurred in America the smallpox epidemic, the fatality of which was atrocious: in several villages only a few people remained alive. This compelled the colonial authorities to unite the Aleuts: thus from twenty villages there remained only seven.

“Although much time will pass after my death,” Father Herman used to say to his disciples, “My memory will not be forgotten and the place of my dwelling will not be empty: a monk similar to me, fleeing the glory of men, will come and will live on Spruce Island. And Spruce Island will not be without people.”

“My little one,” Father Herman once asked Creole Constantine, when he was no more than twelve years old, “what do you think? Will the chapel which they are now building be abandoned?” “I do not know Apa,” answered the little one. “And really,” said Constantine, “I did not understand the question then, although this whole conversation remains lively in my memory.” The Elder, being silent for a while said, “My child, remember that on this place there will be a monastery in time.”

“Thirty years will pass after my death, all those who live now on Spruce Island will be dead, you alone will remain alive, and you will be old and poor, and then they will remember me,” Father Herman used to say to his disciple, Aleut Ignatius Aliaga. “it is remarkable,” explains Ignatius, “how a man similar to us could know all the way ahead of time! However, he was not a simple man! He saw our thoughts and would involuntarily make us open them up to him and receive instructions.” 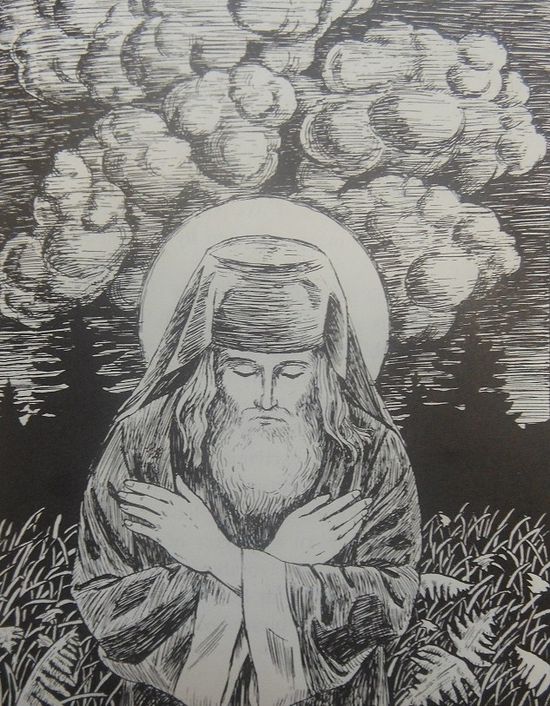 St. Herman praying for the world: Spending nights on end wandering in the wilderness as his beloved elder, Abbot Nazarius, used to do.

“When I die,” the Elder would tell his disciples, “you bury me next to Father Ioasaph. Kill my bullock at once: he served me enough. You bury me by yourselves and do not tell of my death in the harbor. The inhabitants of the port (Kodiak) will not see my face. Do not send for a priest and do not wait for him: your waiting will be in vain! Do not wash my body, place it on the board, fold the arms on the chest, bind me in my mantle and with its edges cover my face and my head with my klobuk. If someone would wish to say good bye to me, let him kiss the cross (in my hands); do not show anyone my face. After lowering me into the earth cover me with my blanket.” This blanket was the board that was always in his cell.

The time was approaching for the departure of the Elder. One day he called his disciple Gerasim to his cell to light candles before the icons and to read the Acts of the Apostles. After some time his face shone and he loudly pronounced: "Glory to Thee O Lord!" Then, ordering to stop the reading he said that it was pleasing to the Lord to prolong his life one week more. After a week, again according to his order, the candles were lit and the Acts of the Apostles were read. The Elder quietly leaned his head on the chest of Gerasim, the cell was filled with fragrance, his face was shining—and Father Herman was no more! Thus he reposed with the sleep of the righteous in the 81st year of his much-suffering life, December 13, 1837.[1]

In spite of the will of Father Herman expressed before his demise, his disciples did not decide to bury him without letting anyone in the harbor know about his death . They were afraid of the Russians, the Aleuts said; and also for some unknown reason they did not kill the bullock.

An envoy was sent with the sad news to the harbor. Upon his return the envoy informed them that the manager of colonies Kashevarov forbad them to bury the Elder until his arrival, that he had ordered a good coffin to be made for the deceased and that he himself would bring it without delay. However, such instructions were contrary to the will of the deceased. And so a frightful wind blew, rain began to pour, and there developed a terrible storm. The travelling distance from the harbor to Spruce Island was not a long one, only two hours, but no one would venture to go into the sea in such weather. It continued in such a way for a whole month; the body of Father Herman lay in the warm house of his disciples. There was no change in his face and not the minutest smell from his body. Finally with an experienced old man, Cosmas Uchilisschev, the coffin was delivered. No one from the harbor came, and the inhabitants of Spruce Island placed the earthly remains of the Elder into the earth themselves. So was fulfilled the last wish of Father Herman—and the wind calmed down and the surface of the sea was as smooth as a mirror.

The day after the death of Father Herman his bull began to miss him and from this despair hit a tree with his forehead and fell onto the ground dead.[2]

One evening in the village of Katari (on Afognak Island) an unusual pillar of light was seen over Spruce Island that reached to heaven. Stunned by this miraculous phenomenon the experienced senior citizens, Creole Gerasim Vologdin and his wife Anna said to themselves: "It looks like Father Herman has left us!" and began to pray. Subsequently they were informed that precisely at that time the Elder had passed away. This pillar was seen in other places by other people as well. That very evening, in another village on Afognak Island people saw a man who was lifted up from Spruce Island towards the clouds.

Having buried their father his disciples erected a wooden memorial over his grave. "I saw it myself," said Kodiak priest Peter Kashevarov, "and now I can say that it is by no means touched by time: and looks as if it were nailed together today."

Seeing the glorious life of podvig of Father Herman, seeing his miracles, seeing the fulfillment of his prophecies and finally his blessed falling asleep, "generally all the local inhabitants have an awesome respect for him as a holy ascetic, and are entirely convinced of his having pleased God," witnessed Bishop Peter.

In 1842, five years after the repose of the Elder, while traveling by sea to Kodiak and finding himself in extreme danger, His Eminence Innocent, Archbishop of Kamchatka and the Aleutian Islands, looked at Spruce Island and said in his mind, "If you, O Father Herman, have pleased the Lord, then let the wind change!" And indeed, even a quarter of an hour did not pass, says the Bishop, when the wind became favorable to them and they successfully landed at the shore. Out of gratitude for his deliverance, Archbishop Innocent served a pannikhida at the grave of the blessed one. 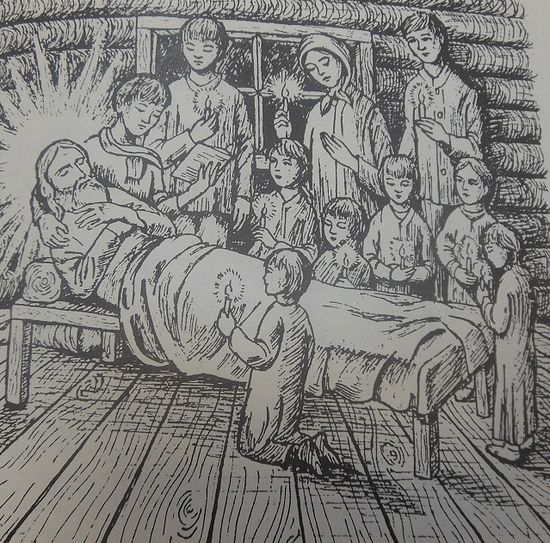 The repose of St. Herman, November 15, 1836: Surrounded by his orphans the Saint leans on the shoulder of his adopted son Gerasim, who is reading the Acts of the Apostles: the cell becomes filled with divine fragrance and a light shines round St. Herman's head as his soul ascends to God.

[1] This church calendar date was later shown to be erroneous. From original documents, Michael Vinokouroff, Archivist of the Library of Congress, obtained the actual date of November 15, 1836, Father Herman’s age being 76. VIDEO: Pilgrimage to Spruce Island
Spruce Island is considered by many Orthodox Christians to be one of the holiest sites in North America. The island was home to the hermitage of Herman of Alaska during the early 1800’s. Every year, in early August, the Orthodox Church in America celebrates the canonization of Saint Herman with a Liturgy, pilgrimage, and banquet.

The Relics of St. Herman of Alaska

A Life of St. Herman from 1919
Vera Johnston
A Russian missionary to America! Yes, indeed, a servant of God, lowly and simple of heart, who attained to such perfection of spirit that in our day and generation there are many in Alaska and throughout the Orthodox parishes in the United States who think that Herman, the humble monk, should be and will be canonized—a saint of the Church.[1]
Comments

May St Herman pray for all of us!
×