An Elderly Joseph, the Virgin Mary and Sexuality 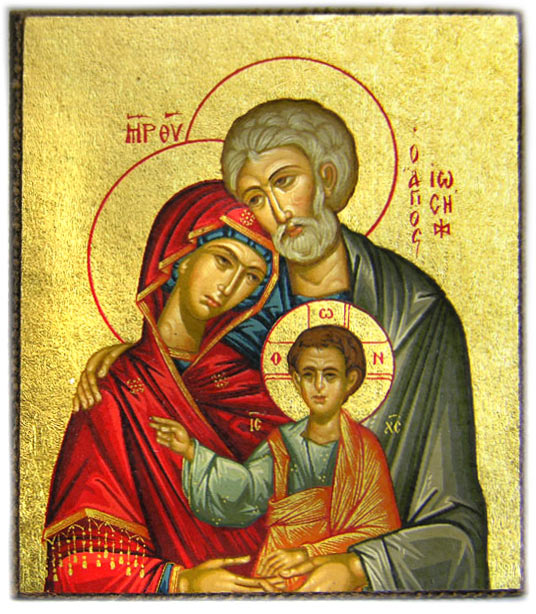 Each year I find myself reminding people, and quite frankly becoming exasperated, about the truth of Joseph and Mary. As Orthodox Christians we teach that Joseph was a righteous old man in his seventies when he, by lot, was blessed to be the caretaker for the Panagia, the Theookos and Ever-Virgin Mary. Furthermore the Church AFFIRMS that since she was a virgin before conceiving Christ, while she was pregnant with Christ, and after Christ was born – why we call her Ever-Virgin – Joseph and Mary NEVER HAD SEXUAL RELATIONS.

This idea of ever-virginity is difficult for most western Christians to accept since, for at least 200 years, the west has considered Joseph as a young man engaged to Mary “just staring out their life” when he discovered she was pregnant. The west uses as their defense for their position that so-called brothers of the Lord mentioned in Matthew 12.47 as evidence that Mary “must have had” sexual relations with Joseph. How else could He have had brothers? The west ignores Christ’s reply whey He says, “For whoever does the will of My Father in heaven is My brother and sister and mother.” (Matthew 12.50)

Without this verse, there is no scriptural evidence that the Panagia, the Ever-Virgin Mary, and Joseph had sexual relations; the west is left only with the emotions of a young man starting out his life alongside his young wife. Who could possibly doubt they were sexually active? What young seventeen year old boy and thirteen year old girl, a “newlywed” couple, would remain virgins? By today’s sexual standards, this would be unheard of, especially in the context of such a high teenage sexually active society as we have today.

I then return to the ANCIENT teaching that Joseph was an elderly widower with children who had been chosen by lot from among the righteous men to be betrothed to the Panagia. In recent years even Orthodox Christians with whom I have spoken struggle with this notion of an elderly Joseph, but not from any sense of spiritual piety or historical evidence. Many today simple cannot stand to see an old man being betrothed to a young girl despite the ancient writings of the Church.

Our society has become so hyper-sexualized that many, by their own admission to me, are grossed out by seeing and elderly Joseph appear in Christmas plays. Refusing to break from the contemporary hper-sexualized society we live in today, and consider that Joseph was righteous and holy, many today prefer to visualize Joseph as a young man. Many are more comfortable “expecting sexual relations” between a young Joseph and “Virgin” Mary than a celibate elderly Joseph caring for an EVER-Virgin Mary.

Ah, the ever present “Christmas Pageant” produced by Sunday Schools around the country. Orthodox Christians have felt the need to “fit in” so terribly with our American culture, we insist on annual Christmas pageants, forgetting that the Protestant West “needs” them since they have no liturgical or iconographic life in their Church. Without the annual Christmas Pageant, most Protestant Churches look and sound “no different” during Christmas than any other day of the year. Without the richness of Orthodox hymnography and iconography, Protestants are left with “the stage” to experience Christ.

The theological fall-out of Christmas Pageants is that most are written by and for Protestants, perpetuating Protestant theology and tradition. And what is left, are Orthodox Christians holding on to traditions that teach our youth incorrect history and theology, when all we needed to teach was Orthodox Tradition in the first place. And if seeing an elderly Joseph walking up the Church aisle during the Christmas Pageant is uncomfortable, a better option would be to acknowledge just how far away from God our contemporary idea of sexuality has come, but at least our youth would know the truth about Joseph and the EVER-Virgin Mary.

"Where She Goes She Brings Peace and Love"
An Interview About the Wonder-Working Icon of St. Anna
Frederica Mathewes-Green, Archimandrite Athanasy (Mastalski)
St. Anna was indeed our ambassador of good will. We know that she is the grandmother of Christ, and she traveled to be everyone’s grandmother. A Homily on the Dormition of Our Supremely Pure Lady Theotokos and Ever-Virgin Mary
St. Gregory Palamas

A Homily on the Dormition of Our Supremely Pure Lady Theotokos and Ever-Virgin Mary
St. Gregory Palamas
If, then, "death of the righteous man is honorable" (cf. Ps. 115:6) and the "memory of the just man is celebrated with songs of praise" (Prov. 10:7), how much more ought we to honor with great praises the memory of the holiest of the saints, she by whom all holiness is afforded to the saints, I mean the Ever-Virgin. Mother of God! Even so we celebrate today her holy dormition or translation to another life, whereby, while being "a little lower than angels" (Ps. 8:6), by her proximity to the God of all, and in the wondrous deeds which from the beginning of time were written down and accomplished with respect to her, she has ascended incomparably higher than the angels and the archangels and all the super-celestial hosts that are found beyond them.
Comments

Patricia Hartmann9/30/2021 3:11 am
It is far better to recognize, according to Ancient Tradition, the Wisdom of God in choosing an elderly spouse for Mary. In the context of the life of Christ, this putative father who had been married, fathered children and supported a family was the perfect earthly father for Christ. He respected Mary's virginity, had a trade to support the family, as well as the maturity to do what God commanded.

Craig Mouldey3/24/2016 10:51 pm
Thank you so much. One of my questions answered. How could I have guessed the answer was really quite simple. And your comments about modern sexuality are spot on also.