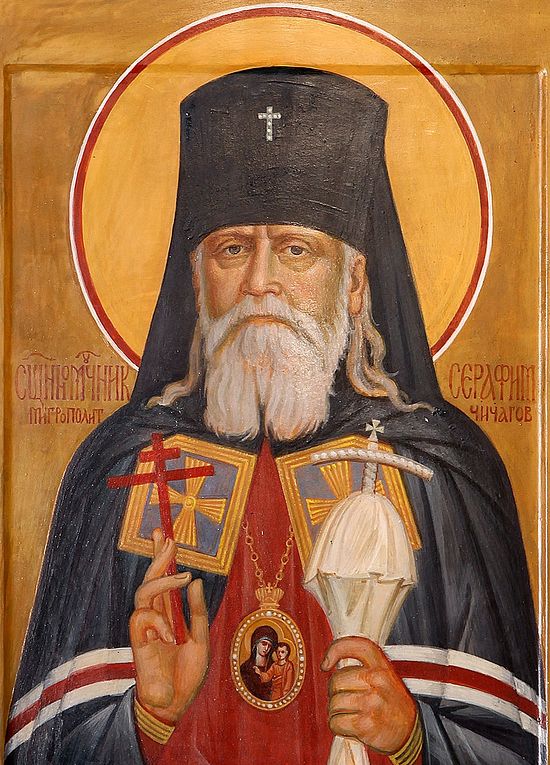 In the name of the Father, the Son, and the Holy Spirit

Today we commemorate a nearly unknown yet great saint, Holy Hieromartyr Seraphim (Chichagov) of Petrograd. This was a man born in the second half of the nineteenth century, to an aristocratic family. He received a brilliant education, graduated from the Page Corps, became a well-known scholar, received a humanitarian as well as a natural sciences education, and was part of the upper echelons of society. He had a brilliant military career, having fought in several wars, but he left all this and became a priest. He did more than anyone else for the canonization of St. Seraphim of Sarov.1 This was his particular service.

Holy Hieromartyr Seraphim was not only a priest (later a bishop)—he was a true prophet. If we turn to the new martyrs with prayers for help—prayers to those who live in the kingdom of heaven for those who live here on earth—they can provide that help, because they once lived as we do, here on earth. Thus, Holy Hieromartyr Seraphim possessed a remarkable gift—the ability to recognize the signs of the times. He was able to recognize what very many of his contemporaries could not. Even the canonization of St. Seraphim of Sarov itself was something he prophesied, because the majority of the clergy, bishops, and society in general—strange as it may seem to us—did not want to canonize St. Seraphim of Sarov. They were perplexed, they thought, “Who is he, and why should he be canonized?” We who venerate St. Seraphim as one of the warmest intercessors of our time would have a hard time understanding why they felt that way. But that is just how it was. Because of St. Seraphim (Chichagov’s) position in society he was able to talk to the Emperor and make known to him the nature of St. Seraphim’s extraordinary ascetic labor; and the saint was finally canonized. It would be have been very difficult for those who would soon experience the terrible period of persecutions not to have had this great intercessor and example to follow.

In 1910, Bishop Seraphim wrote a letter to his close friend. This was 1910; the revolution of 1905 had been resolved, the economy and industry were flourishing, Russia had become a powerful nation, having now recovered from the Russo-Japanese War. It would seem that an amazing, beautiful horizon was opening for the country, and the people were caught up in a kind of euphoria. We now know what was to happen only seven years hence. But then, only a few people knew. We have the testimony of perhaps only two or three people. One of them was Bishop Seraphim, who wrote in that wonderful, bright year of 1910:

“Everything has fallen apart. Educated society has lost all understanding of what Christianity is. Everyday I can see before my eyes the ongoing corruption of our clergy. There is no hope at all that they will come to reason or understand their condition. Everywhere is drunkenness, debauchery, simony, extortion, and secular interests. The last remaining believers are trembling with repugnance over the condition of their clergy. And there is no one to finally realize just what brink of destruction the Church is standing on, or what is happening. The opportune time was missed. A disease of the spirit has taken over the entire state organism. The moment of recovery cannot recur, and the clergy is rushing headlong into an abyss, having no strength or desire to stop the process. Just one more year, just a little while, and there won’t even be simple folk left around us. They will all rise up and reject such insane and repulsive leaders. And what will happen to the state? It will perish along with us. It no longer makes any difference who is in the Synod, who is the procurator, what seminaries and academies there are—our agony and death are near.”

These are the words of a prophet. In those years such words seemed crazy. What is he saying? Such prosperity all around, everything is wonderful, everything is on the upswing. But holy, godly people see things with different eyes than ours. The external signs of success mean nothing to them; they looked at the root, at the spiritual essence of the people—and they saw something terrible. St. John of Kronstadt wrote of this, as did St. Theophan the Recluse and a number of others. You can discern the state of the people by the state of the clergy. If the clergy is degraded then the people are also corrupt.

What was the main fault of those revolutionary events? You can object, you can cite a number of other reasons, but I have no doubts at all. It was the sins of our Local Church. The Church’s weakness was the main and root problem. Our own Local Church is at fault for what happened in 1917. We were incapable of being on the proper level. And the Lord allowed catastrophes and misfortunes, so that people would come to their senses, so that they would see just what their madness was.

In 1937 Holy Hieromartyr Seraphim, now a venerable elder, completely unwell, suffering from dropsy, was arrested once again. He had been imprisoned many times before, and spent years in the camps. You would think that by this time they would have left him in peace. He was very old but still of sound mind. He was so sick, such a feeble old man completely worn out by the camps, that he couldn’t even walk to the “raven” (the black automobile that took away arrestees) and they had to carry him on a stretcher. They shot him a few days later at the Butovo shooting range. He never confessed to any of the outlandish charges. Many people, even clergy and bishops, confessed under torture to even the most ridiculous crimes—spying, conspiracy against the soviet government, and so on. Holy Hieromartyr Seraphim considered it all nothing. We have seen his interrogation reports—he was subjected to terrible trials but he never implicated a single person, never named a single name, and never agreed to the accusations against him. But his prophetic gift never left him. Perhaps this was because of his faithfulness, his wisdom, and his courage.

Just a few months before his execution in 1937, when it seemed that the Local Church had perished irreparably, when there were no more than a few clergymen and bishops left in freedom, when bishops were saying that they didn’t believe they would ever serve another Liturgy and that these were the last times, Holy Hieromartyr Seraphim writes:

“The Orthodox Church is undergoing serious trials. Whoever remains faithful will be saved. Because of the persecutions many are leaving the Church, others are even betraying it. There have been other periods of persecution in history, but they all ended in the triumph of Christianity. That is how it will be with these persecutions. They will end, and Orthodoxy will triumph once again. Now many are suffering for the faith, but they are the gold that is purified in the furnace of persecution. There will be more new martyrs suffering for the Christian Faith than there ever has been throughout the history of Christianity.”

We know very little about the holy new martyrs, who were almost our contemporaries. Therefore we do not learn from their experience or turn to them in prayer. We need to pray especially to Holy Hieromartyr Seraphim (Chichagov) that he would enlighten our minds; that we would see life as it really is before God and not before people; that we would understand the signs of the times, and be able to make sense of the complicated, contradictory world in which we live, in which God has judged that we must live.

Holy Hieromartyr Seraphim, pray to God for us! Amen.

1 Bishop Seraphim (Chichagov) was the author of the Diveyevo Chronicles, a history of the St. Seraphim-Diveyevo Convent and the Life of its spiritual guide, St. Seraphim of Sarov.
See also

Diveyevo Obediences: Photographs from the Early 20th Century
On June 14/27 Diveyevo Convent honors its own saints. The pre-revolutionary day-to-day life of the monastery and its sisters were preserved in photographs, and it we gladly present these unique pictures here.

From the Life of St. Seraphim of Sarov
Helen Kontsevich
As a beginning, Prokhor set off with five companions to the Kiev Caves Lavra, desiring to receive the blessing of the Kiev Elders. Among the ascetics of that monastery was the famous elder Dositheus (who was found to be a woman after she died). That clairvoyant elder had been in continual contact with the blessed Elder Paisius Velichkovsky, and with those monastics who were of one mind with him. Dositheus gave Prokhor spiritual instruction, counselled him to study the ancient Holy Fathers on the work of interior prayer, and directed him to go to Sarov Monastery and remain there until death, for there he would find salvation.
Comments

Daniel Monroe3/18/2016 11:33 pm
Is this the bishop who exiled St. Barsanuphius of Optina to Old Golutvin Monastery?
×