Faith on their Sleeves: Orthodox vestments hold layers of meaning 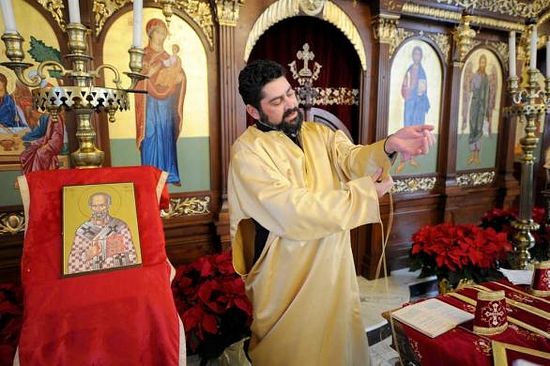 The Rev. Vasile Bitere puts on a sticharion (the large gold robe) at Holy Trinity Greek Orthodox Church. The color gold represents the kingdom of Heaven, he said.

Holy Trinity Greek Orthodox Church is one of the oldest Byzantine-style churches in the Southeast.

The congregation was established in 1911. The church, with its ornate and colorful nave and domed ceiling, was built in 1921 at 921 Telfair St.

Nearly everything in the church has a great deal of symbolism.

“We use icons. They’re very powerful,” said the Rev. Vasile Bitere, the church’s pastor. “Icons have images of Christ and the saints and the events of the life of Christ. We call the icons like windows to heaven. They help us relate to the saints and the martyrs.”

The symbolism behind each piece of Bitere’s vestments are no exception.

To understand them, one must remember the roots of the early Christian church.

In the Old Testament, priests were instructed to wear robes before they entered the Holy of Holies, and to lay down their robes when they went to meet the people, Bitere said.

“So vestments have been from the beginning,” he said.

The Greek Orthodox Church traces its roots to the Byzantine Empire and the organization of the Christian Church under five patriarchs in Rome, Constantinople, Alexandria, Jerusalem and Antioch.

In 1054, Rome (which became the Roman Catholic Church) split from the other four churches (which became the Orthodox Churches). The four remain together, adhering to the same faith, traditions and vestments that were used in the Byzantine era.

The Byzantine era, beginning around 330 A.D., was characterized by bold colors, ornamental designs and precious metals in everything from art to architecture to mode of dress.

The individual pieces of the vestments are standard across the Orthodox church, but the colors vary according to the time of year.

“Now is Christmastime. Red is predominant. You will see most priests wearing red,” Bitere said.

At Easter, the color is predominantly white, which symbolizes purity, or gold, for the kingdom of Heaven. Green is worn in the spring to represent life, and during the Feasts of Mary, blue is worn. Purple is worn during Lent.

“It’s many different combinations: red and gold, white and blue, or green,” he said.

The priests recite specific prayers, mostly from the book of Psalms, each time they put on each piece.

The intended effect of the vestments is to draw attention away from the individuality of the priest and transform him into a representative of God.

The first five pieces are worn by all priests. The rest are earned as a priest rises in rank within the priesthood.

RASON (ROBE): The rason is not officially part of the Eastern Orthodox vestments, but it is worn daily by the clergy for general business inside the church. It is black to symbolize the commitment to serving Christ.

“If I need to do a service, or I need to meet people in my office, that is my official (attire),” Bitere said.

STICHARION (TUNIC): “Back in the time of Christ, people were wearing clothing made of wool. The clergy needed to differentiate their clothing,” Bitere said.

Sticharion are made of linen or silk and are white or a light color to represent purity. The sleeves are bound at the wrists with ties.

With its roots in the early church, the garment itself is a reminder of the universality of the church.

EPITRACHELION (STOLE): The epitrachelion is worn around the neck. The two sides are often attached and hang at the priest’s front to the hem of the sticharion. When the priest is not performing a full Mass, he can wear the epitrachelion with the rason to symbolize his position while visiting a sick parishioner in the hospital, or performing a side prayer.

“This is what I’m going to wear when it’s not required to be fully vested,” Bitere said.

EPIMANIKIA (CUFFS): The epimanikia are put on – right first, then left – to represent the bonds of Christ, according to Orthodox America Web site roca.org, and remind the priest that he is to rely on God’s strength, not his own.

ZONE (BELT): The zone is tied at the waist and represents readiness to serve God.

“It symbolizes our ties with Christ,” Bitere said.

EPIGONATION (THIGH SHIELD): The epigonation is a diamond-shaped piece of stiff cloth that is worn near the knee. It represents the spiritual sword and the word of God.

PHELONION (CHASUBLE): The phelonion represents the robe of Christ and righteousness. It is worn over the shoulders and hangs low in the back and below the chest in the front.

PECTORAL CROSS: The last thing Bitere puts on is the pectoral cross. Large, silver and of intricate design, it hangs below his chest.

“The pectoral cross represents that we do not keep Christ just in our hearts, but in preaching about Christ, we witness to others,” Bitere said.

Bishops also wear a round image of Mary, Mother of God.

KAMILAVKA: The kamilavka, a cylindrical hat, is normally worn by Greek Orthodox priests during services. Why Vestments? An Introduction to Liturgical Textiles of the Post-Byzantine World

Why Vestments? An Introduction to Liturgical Textiles of the Post-Byzantine World
The exhibition Liturgical Textiles of the Post-Byzantine World, now on view through November 1, 2015, presents a selection of notable liturgical vestments that communicate the continuing prestige of the Orthodox Church and its clergy in the centuries following the fifteenth-century fall of Byzantine Constantinople to the Ottoman Turks. On the Sakkos and the Mitre
Metropolitan Hilarion (Alfeyev)

On the Sakkos and the Mitre
Metropolitan Hilarion (Alfeyev)
The sakkos first appeared in Russia no later than the fourteenth century as a liturgical vestment of Moscow’s metropolitans. The sakkos of Metropolitan Peter (1308-1326) is preserved to this day. It was sewn in 1322 from light-blue satin material on which crosses in circles are woven with gold.