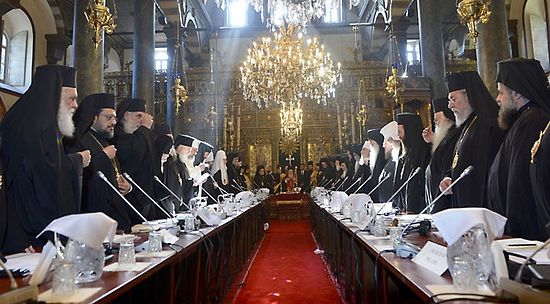 The Inter-Orthodox Council, with a token number of bishops from each of the fourteen Local Churches and supposed to take place in May 2016 to discuss administrative issues, is looking increasingly troubled. First, there is the schism between the Patriarchates of Jerusalem and Antioch. Then there were rumours after contacts with top US officials that the US State Department was trying to set the agenda, specifically regarding homosexuality. Then there was news from the Russian Orthodox Church that delegates from several Local Churches, notably the Russian, the Romanian (the second biggest) and the Georgian, had failed to agree on the contents of several points in the seemingly US-determined agenda.

Hierarchs of the Ukrainian Orthodox Church then expressed popular concern that the Council was taking place at all. After all Constantinople had not long before sent schismatic representatives of the Ukrainian Church in Canada (the fraction under Constantinople) to Kiev for reasons which the Ukrainian Church naturally found sinister. After this came the news that the elderly Patriarch Bartholomew had erected a statue to himself and that he would never recognize the Carpatho-Russian Metr Rostislav as the representative of the Church of the Czech Lands and Slovakia. Then came the Patriarch’s visit to Bulgaria when he insulted the Bulgarian people and a diplomatic incident followed and the Bulgarian Prime Minister refused to meet the Patriarch. Some even asked if Patriarch Bartholomew’s behaviour was designed to sabotage his own Council.

After this the Synod in Constantinople sacked the hierarch appointed only two years before for the modernist Paris Jurisdiction, Archbishop Job. Next came the shooting down by Turkey – some say at US instigation – of a Russian aeroplane. The result of this is that the Russian delegation felt unable to attend the next preparatory meeting in Istanbul for the future Council. Indeed, the question was asked if the Council could even take place in Istanbul, as had been proposed. Some have suggested, as we suggested in our booklet, ‘The World Council of Orthodoxy’ in May 2007, that any future Council take place at the New Jerusalem Monastery outside Moscow, where alone a politically free Council could take place.

Next came the Pope’s welcome for the Council – in effect compromising it, making it appear just to be a cheap copy of the Vatican’s disastrously divisive and US-Protestant-style Second Council of 50 years ago. Then came the Pope’s greeting to Patriarch Bartholomew on the Catholic St Andrew’s Day, looking forward to the day when Catholics, without repentance, would be in full communion with Constantinople. Then came the news that a joint commission of the Russian and Bulgarian Churches had agreed that there were no objections to the canonization of the much revered Archbishop Seraphim (Sobolev), the archbishop in Sofia of the Russian Orthodox Church Outside Russia who was the hero of the Moscow Council of 1948, which denounced ecumenism.

Now news has come that Archbishop Jerome of Athens, the head of the Church of Greece, will not attend the next preparatory meeting in Istanbul. There is speculation that this is connected with the imperialistic and meddling claims of Patriarch Bartholomew to Greek territory. And also the news that Rome and Constantinople are celebrating (!) the 50th anniversary of the highly controversial (and some would say meaningless) lifting of the 1054 anathemas between Rome and Constantinople does not help. As Patriarch Alexis I of Moscow pointed out at the time this event has no importance whatsoever for the mass of the Orthodox Church as a whole, since it is an event that concerns only the tiny Local Church of Constantinople and Roman Catholicism. Even so the event was rejected at the time and is still today rejected by the devout and politically free of the Patriarchate of Constantinople. At Last, A Council For The Ages?
Archdeacon John Chryssavgis

At Last, A Council For The Ages?
Archdeacon John Chryssavgis
The council of 2016, which has been on the table for discussion and preparation since at least 1961, will for the first time ever gather representatives from all fourteen independent Orthodox Churches. The Pan-Orthodox Council, Ukraine Crisis and Christian Unity
An interview with Metropolitan Hilarion Alfeyev of Volokolamsk, the chairman of the Russian Orthodox Department of External Church Relations.

Rachel1/25/2016 2:11 pm
Why so much negativity and hatred. "Whoever is for us is not against us". Isn't some positivity, some constructive moves, better than petty squabbling over times and seasons? He who honours the day regards it to the Lord and he who doesn't honour the day, to the Lord he does not honour it. Jesus spoke with Samaritans, whom the Pharisees believed to be utterly incorrect and on the wrong path, beyond the pale! He engaged in constructive dialogue. Anyway it is totally confusing to the common people, to find the priests and hierarchy stating categorically one should avoid this Orthodox Church and that Orthodox Church, because they have the wrong calendar, speak the wrong language, don't fast enough, fast on the wrong day, wear the wrong clothes to church, sing in the wrong way, etc etc. Who is to be believed?
------------------------------------------------------
Considered to be the most important meeting of the world’s Orthodox Christian bishops in over a thousand years, the Great and Holy Synod which was to convene at the headquarter city of the Ecumenical Patriarchate of Constantinople in Istanbul, Turkey, is being relocated to Crete, citing geopolitical concerns.

Haris1/12/2016 3:36 pm
The Orthodox Church needs a Council that has the potential of being proclaimed in the future as Ecumenical. For the Council to be Ecumenical it has to uphold the 8th (879 AD) and 9th (1341 AD) Councils. It also has to mend the rift created in the Orthodox world because of the calendar change.

Dr Vladimir de Beer12/25/2015 4:34 pm
Dear Father Andrew, thank you very much for this. You remain one of the few English-speaking Orthodox clergymen who are ever ready to speak out and defend the Church against modernist and liberalist aberrations.

William Bush12/16/2015 10:42 pm
Fr Phillips doesn't seem to have anything halfway positive to say about anything or anyone. Lots of speculation, and the remark about holding a politically free council at the New jerusalem Monastery seems like a joke today. I like his material on Western saints but find such articles distasteful. He's a modernist, Constantinople Ukrainians are schismatics, etc., etc... Dear pravislavie.ru: do yourself a favor. Stop posting such stuff.

Bertinos12/15/2015 12:58 pm
This is agenda is fundamentally different from the indeed ill-fated Second Vatican Council!

Moreover, even not the Ecumenical Patriarchate is advocating any significant changes!

Last but not least: there is already an agreement on 7 issues, and only the issue of autocephaly and the issue of the order of commemoration have encountered serious difficulties, although these are not fundamental issues to the teachings and life of the Church. Seemingly "diificult" issues such as relations with the heterodox christians have been discussed at length before.