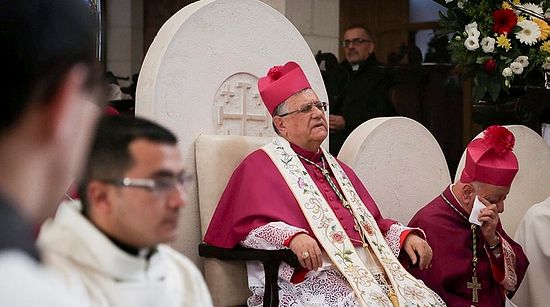 The car taking Latin Patriarch of Jerusalem Fouad Twal, head of the Catholic Church in the Holy Land, was struck Friday, Christmas Day, in Bethlehem by rocks thrown by Palestinian rioters.

None of the passengers in the patriarch’s vehicle was injured in the incident, but his car sustained damage, according to a Ynet news report.

Clashes between Israeli security forces and Palestinian demonstrators erupted following his departure from the city, known as the birthplace of Jesus, the news site said.

He said both suspects were under investigation for possible ties to extremist Islamist groups. 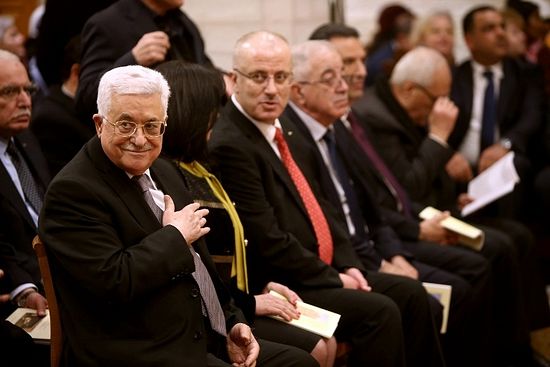 
A report in the Palestinian Ma’an news agency put the number of detainees at 16. According to the report, the group are Salafi radicals who were preparing to carry out a terror attack against Western tourists arriving in Bethlehem to celebrate Christmas there.

The report did not identify the detainees as being affiliated with any known jihadist groups.

A report in the Hebrew-language daily Ma’ariv said that senior PA officials met in Bethlehem earlier this week in order to formulate a strategy against the threat posed by extremists to the Christian celebrations in the city.

At least four people are being held in detention without trial in Bethlehem and four others, supporters of Islamic State, were arrested elsewhere in the West Bank. It was not clear where eight other people were being held.

In a statement released by his office before the visit, Abbas praised Palestinian Christians for their role in creating a “rich and diverse society.”

“This year, we witnessed more churches around the world supporting the call for recognition of the State of Palestine, and an increasing number of Christian groups campaigning to divest from companies that profit from the Israeli occupation of our land,” Abbas said. The Light and the Peace of Bethlehem
Patriarch Daniel of Romania

The Light and the Peace of Bethlehem
Patriarch Daniel of Romania
"The theological and spiritual treasure of Christmas carols comes from the teaching of the Orthodox Church, inspired by the Gospel and the writings of the Holy Fathers, which profoundly meditate on the mystery of God’s love of mankind, shown to us by the Incarnation and the birth of His Son, Who became a Man out of His love of man and for the sake of man’s salvation." Letter from Bethlehem. Church of the Nativity in perilous state
In this, the first in an occasional series of Extra reports from our foreign correspondents, Harriet Sherwood visits the Church of the Nativity in Bethlehem. It’s shared by three denominations and attracts two million visitors each year. The building is about to undergo the first major renovation in its 1,700-year history, which is being led by the Palestinian Authority
Comments
×