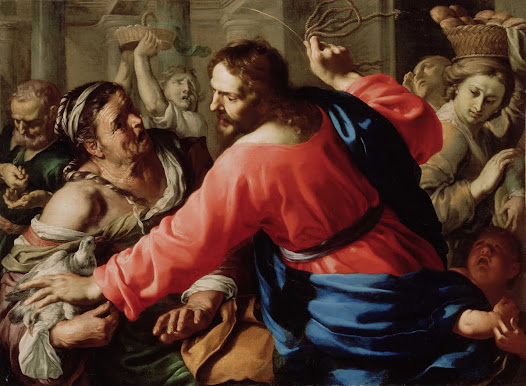 Although each of the four Gospels tells of our Lord’s purging of the Temple, in John’s account its position is unique. Whereas the three Synoptic Gospels place the story during the last week of Jesus’ earthly life, we find it, in John’s telling, near the very beginning of His ministry. So when, in fact, did it happen? Or is this even a useful question?

Hoping its usefulness will become clear by how I address the question, let me begin by suggesting that a plausible case can be made for either option.

First, those who believe John’s sequence better represents the historical facts argue that in the Synoptic accounts the adult Jesus travels to Jerusalem only one time—during the last week of His life. As a point of historical probability, this is unlikely, since it was common for Palestinian Jews to visit Jerusalem at least a time or two each year, normally for major feasts. It is reasonable to suppose, consequently, that Matthew, Mark, and Luke, in limiting Jesus’ journeys to the Holy City to a single instance, were guided less by a quest for historical accuracy than by a concern for a simpler, more concise narrative.

John, on the other hand, not constrained by this concern, tells of Jesus’ several trips to Jerusalem; he placed the purging of the Temple more accurately at a point earlier in the Lord’s ministry.

Many readers believe this to be a compelling argument. This much, at least, must be conceded: Whereas it is easy to think the Synoptics really did synopsize several Jerusalem-pilgrimages into one, it is difficult to see why John would have invented several such trips.

Second, those who favor the opposite view argue that the crisis provoked by Jesus’ action in the Temple better fits the circumstances near the end of His life. After all, this was the act—combined with His prophecies of the Temple’s destruction (Matthew 24:2; Mark 13:12; Luke 21:6)—in which Jesus most clearly perceived posed a threat to the position of His priestly enemies.

This argument—preferring the later date in Jesus’ ministry—I think to be the stronger; the Synoptics, on this point, represent the actual historical sequence. John’s placing of the event, I believe, was determined by a specific literary/theological interest.

Before addressing that interest, however, we should first read and analyze John’s description of the event:

Now the Passover of the Jews was near, and Jesus went up to Jerusalem. And He found in the temple those who sold oxen and sheep and doves, and the seated moneychangers. And having made a whip of cords, He expelled them all from the temple, with the sheep and the oxen, and poured out the changers’ money and overturned the tables. And He said to those who sold doves, “Take these things away! “Do not make My Father’s house a business place!” Then His disciples remembered that it was written, “Zeal for Your house will consume Me.” So the Jews answered and said to Him, “What sign do You demonstrate for us, since You do these things?” Jesus answered and said to them, “Destroy this temple, and in three days I will raise it up.” Then the Jews said, “It has taken forty-six years to build this temple, and will You raise it up in three days?” But He was speaking of the temple of His body. Therefore, when He had risen from the dead, His disciples remembered that He had said this; and they believed the Scripture and the word Jesus spoke (John 2:13-21).

Two features of John’s account explain why the author places this story near the beginning of Jesus’ ministry.

First, only in John’s narrative does Jesus speak, at this time, of His Father:

“Do not make My Father’s house a business place!”

Indeed, in John’s gospel this sentence is the first of Jesus’ many references to His Father. In the course of John’s story, we learn that His relationship to the Father is the source of His identity. His authority and His mission are entirely determined by that relationship:

This theme, initiated at the purging of the temple, will reach its climax in the lengthy prayer Jesus offers to the Father in John 17.

A second feature unique to John’s account of the purging of the temple is the quotation from Psalm 69 (68):10:

“Zeal for Your house will consume Me.”

A close inspection of this verse uncovers a subtle but important nuance in John’s thought. Namely, this: In the Septuagint text of this passage the verb is given in the aorist tense, which denotes the past:

“Zeal for Your house has consumed Me (katephagen Me).”

As John quotes the verse, however, the verbal tense is shifted to the future: “

“Zeal for Your house will consume Me (kataphagetai Me).”

That is to say, John deliberately draws our attention toward the end of Jesus’ life, when His zeal will devour His life in the Passion. The “house” in this reference is no longer Jerusalem’s temple but that very abode in which

He Himself is the “house of God” upon whom and from whom the angels descend and ascend (1:51). Thus, when Jesus tells His enemies,

“Destroy this temple, and in three days I will raise it up”—John instructs us—“He was speaking of the temple of His body.”

In this imagery we discern why John places the event of the temple’s purging so early in his narrative. The story serves a programmatic purpose by introducing into Jesus’ ministry, from the beginning, the drama of His mission. As soon as He has worked

Jesus steps forward to vindicate His Father’s glory, thus eliciting the murderous animosity that will, in time, consume His life. But Jesus also foretells His Resurrection “in three days.” None of this becomes clear, says John, until

“He had risen from the dead,”

“His disciples remembered that He had said this.”

When John says the disciples “remembered”—emnesthesan—the Scripture and what Jesus said, surely more is intended than a simple human recollection. This anamnesis, in which the Word of God takes possession of the memory, comes from the activity of the Holy Spirit, of whom Jesus promised,

“But the Counselor, the Holy Spirit, whom the Father will send in My name, He will teach you all things, and bring into your memory (hypomnesei) all things I said to you” (14:26).

Finally, by way of tying this story to the one immediately before, John comments that these disciples, who

when He changed the water into wine, now

“believed (epistevsan) the Scripture and the word Jesus spoke” (2:21). Elder Iliy (Nozdrin): “Now our duty is to pray with all our zeal so that the Lord might reconcile our lives”
Last Sunday, the visit to Valaam of Schema-Archimandrite Iliy (Nozdrin), confessor of the Optina Monastery’s brethren and an Orthodox elder famous all over Russia, came to an end. This year he has turned 82.
Comments
×