On St. Cyril and the Mia Physis Formula 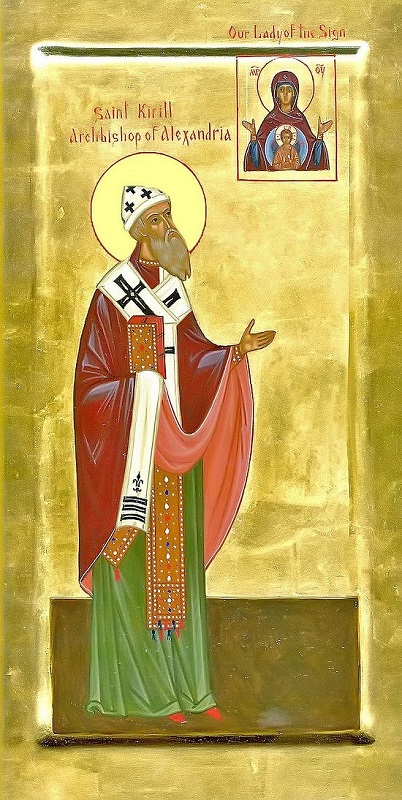 It may be added that in Oratio ad dominas, the mia physis formula is found in a quotation from Apollinarius’s Letter to Jovian, which Cyril thought to be written by Athanasius. His explicit reason for this quotation is the occurrence of the epithet ‘Theotokos’, not that it contains the formula. He does not in any way refer to or discuss the formula. In the one time that he speaks of ‘one nature, the incarnate [nature] of the Word himself ’ in Contra Nestorium, it is immediately followed by the analogy of soul and body. Therefore, it should be interpreted in light of this comparison.

Before the reunion with the Orientals in 433, there is only one other work of Cyril’s in which he speaks of ‘one nature’ in a christological context, Contra Orientales. We find the same quotation of pseudo-Athanasius which we also encountered in Oratio ad Dominas, now in Cyril’s defence of the eighth anathema, which states that Emmanuel should be honoured with one worship. Obviously, the reason for this quotation is not that it contains the mia physis formula, but that it also speaks of one worship. After citing pseudo-Athanasius, Cyril gives a brief quotation from Nestorius, “Let us confess God in man; let us revere the man who is co-worshipped because of the divine connection with God the Word”, which he discusses. Cyril then refers to an argument which Andrew of Samosata has used against him: he himself has said that the Son is co-seated on the throne with the Father, together with his own flesh; since συν and μετa are the same thing, why does he attack someone who says that the man must be co-worshipped (συν-) with God the Word and co-named (συν-) God?

In his response, Cyril makes a distinction between things that are one by composition, and things that are two because they are separate and by themselves. When someone attributes συν or μετa “to one person and one nature or hypostasis — as he himself did when he wrote that the Son is seated on the throne “with his own flesh”—the unity by composition is maintained. But when συν or μετa are applied to two separate beings—like Peter and John—, this does not indicate one entity. As usual, Cyril’s point is Christ’s unity over against a division into a man and the Word by themselves. His remark on one person, nature or hypostasis is a general statement. It cannot be concluded from this that the three terms have exactly the same meaning.

Our investigation into Cyril’s use of the mia physis formula so far leads to the following conclusion. In his writings until the reunion with the Orientals in 433 there are only four occurrences in which the archbishop speaks of ‘one nature’ in a christological context. In one of them, it concerns a general statement about the application of συν and μετa to a unity which is compounded. Two times we encounter the mia physis formula in a quotation from Apollinarius’s Letter to Jovian, which Cyril thought to be a work from Athanasius; he does not comment on the formula in any way. The only instance in which Cyril of Alexandria himself actually employs the mia physis formula is found in Contra Nestorium, where it is mentioned without any emphasis. One can only conclude that, in contrast with the many examples of dyophysite language, miaphysite terminology hardly plays a role in Cyril’s christology before the Reunion of 433, and therefore, is certainly not typical of his own christological vocabulary.

It is the partisans of his own party, dissatisfied with the reunion, which occasion him to give more attention to the mia physis formula in several letters…

…It may be concluded that, although the mia physis formula occurs relatively often in [the] letters following the reunion with the Orientals, the main reason that Cyril defends it is probably that he believed it to be taught by Athanasius and other Church Fathers. It is for him a tool —but by no means an essential tool — to stress the ontological unity of the Incarnate Word. He repeatedly explains it by referring to the anthropological analogy: just as the one human nature is a composition of the two natures of soul and body, so Christ is the one Incarnate nature of the Word, out of the natures of the Word and the flesh.

There is only one work of Cyril’s left in which we find the formula, On the Unity of Christ, one of his latest writings, containing an overview of his christology. There is one section in which the archbishop discusses the formula. It starts with a remark by his interlocutor B: “Both natures, then, have been confused and have become one”. Cyril first declares that it would be folly to think that the nature of the Word has been changed into that of flesh, or the other way round, and continues: “We do say that the Son is one and his nature one, even if he is conceived of as having assumed flesh with a rational soul”. When B asks whether there could be two natures, that of God and that of man, Cyril responds that divinity and humanity are different with respect to the principles inhering them, but that in Christ they have concurred into a unity beyond understanding.

When B presses him for an example of the union, Cyril mentions a human being: a human being is conceived of as one, “and his nature also as one, although there is not just one species, but he is rather composed out of two things, I mean, soul and body”. And if one separates the soul from the body, will there not be two men instead of one, he asks. When B refers to the ‘inner’ and the ‘outer man’, spoken of by Paul, understood as soul and body, Cyril answers that the apostle makes a distinction grasped by contemplation only.

B then argues that “if we say that the nature of the Son is one, even if he is regarded as incarnate (σεσαρκωμνς)”, a merger or a mixture must have taken place, “in that the human nature is as it were absorbed in him”. Cyril responds that it would be idle talk if someone alleged that a merger or mixture has taken place, “if it is confessed by us that the nature of the Son, incarnate and made man (σεσαρκωμνυ τε κα νηνρωπηκτς), is one”. And he adds: reasonings will not be able to convince someone. He points to the burning bush as a type of the incarnation.

We see that Cyril’s use of ‘one nature’ corresponds to that in his previous writings. The one nature of the Incarnate Word, the result of a concurrence of divinity and humanity, is compared to the one human nature, which is out of soul and body. The participle ‘incarnate’ belongs to ‘Word’, not to ‘nature’. Therefore, the mia physis is the composition of the two INDIVIDUAL NATURES of the Word and his humanity.

Having investigated all the passages in which Cyril speaks of ‘one nature’ in a christological context, it is clear that the mia physis formula is by no means his favorite formula, and that, although miaphysite terminology increased after the reunion with the Orientals, this was especially due to the questions raised by the partisans in his own party, to which he responded in letters. He defends the formula, as coming from the Fathers, but he explains it by the anthropological analogy, in which dyophysite and miaphysite language come together.

If the mia physis formula is found in Cyril’s own writings before the Reunion of 433 only three times, while two of the occurrences are quotations from pseudo-Athanasius, how is it possible that people in his own party place so much emphasis on the ‘one nature’? It seems that what Lebon writes about the leaders of the Miaphysites in the fifth and sixth centuries, also applies to Cyril’s contemporaries: they were more influenced by the pseudepigraphic Apollinarian writings than by those of Cyril. It is the Apollinarian forgeries which led them to question Cyril’s reunion with the Orientals, and therefore, indirectly, it is these forgeries which led Cyril to give more attention to the mia physis formula in his letters from 433 till 435. It is likely that the same reason induced him to devote a section in On the Unity of Christ to the ‘one nature’.

From Hans Van Loon, The Dyophysite Christology of Cyril of Alexandria, pp. 521-530 Who is the True Inheritor of the Apostle Thomas?
Polycarp Nehamaiyah

Who is the True Inheritor of the Apostle Thomas?
The correspondence of two Indians: an Orthodox and a non-Chalcedonian
Polycarp (Dr. Rohan Nehamaiyah)
In early 2015, Pravoslavie.ru posted in both Russian and English an article by Clement Nehamaiyah on his path to the Orthodox Church. To our pleasant surprise, we learned that the article was read in India and prompted an Indian non-Chalcedonian Christian to write a letter to Clement in which he attempts to prove that the “Indian Orthodox Church” is the true Church of Christ as it was brought to India by the Apostle Thomas. We asked Clement to answer this very interesting letter, and his brother Polycarp, who became Orthodox together with his brother, responded. Pentecost Sunday: St Cyril of Alexandria’s Commentary on the Gospel (John 20:19-23)
St. Cyril of Alexandria
He shows that the gift of the Spirit necessarily attends those who are ordained by Him to be Apostles of God. And why? Because they could have done nothing pleasing unto God, and could not have triumphed over the snares of sin, if they had not been clothed with power from on high, and been transformed into something other than they were before.
Comments

that is the miaphysite formula. it’s the pre-product portion of the formula. the formula also includes the product portion. in fact, the union is what’s emphasized in the miaphysite definition “Miaphysitism is a Christological formula holding that in the person of Jesus Christ, Divine nature and Human nature are united (, mia – “one” or “unity”) in a compound nature (“physis”), the two being united without separation, without mixture, without confusion, and without alteration”

This is also consistent with what the church of Alexandria via Dioscorus expressed at Chalcedon in the documented minutes, Dioscorus said “I accept the phrase ‘of two natures,’ but I do not accept ‘two'” and he said “there are not two natures after the union”

In fact, Cyril himself wrote something that explicitly conflicts with the definition Chalcedon used.

“means that after the Incarnation, one cannot speak about two natures, but of the one nature of Christ, of God the Word ”

^ when Cyril wrote this, what makes you think the “in two natures” formula would be preferable to him over the miaphysite one?
×