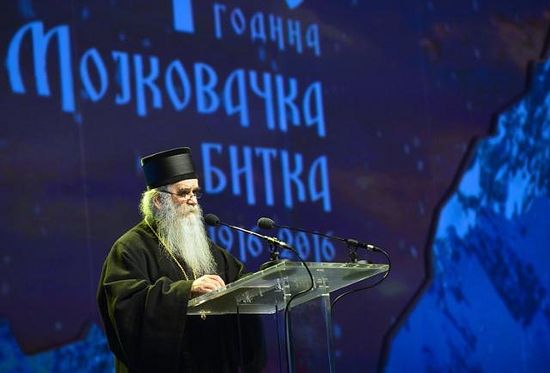 Serbian Orthodox Church (SPC) Metropolitan of Montenegro and the Littoral Amfilohije made this statement for the state broadcaster RTS late on Monday.

Amfilohije was in a delegation of the Serbian Orthodox Church (SPC) that presented Pope Francis the response of Serbian Patriarch Irinej to his letter of last year in connection with the canonization of Stepinac.

The patriarch's response provides for setting up a mixed commission to discuss the issue. The SPC expects the Vatican to be appoint a commission as well.

Asked if "the contentious issue between the two churches might be resolved any time soon" Amfilohije said, "They have listened to everything with full attention and now we expect them to prepare a proposal for their mixed commission."

"It was mentioned that the first meeting could possibly take place in Rome, and then in Zagreb, Belgrade. It is obvious that Pope Francis is very interested in that."

As for the letter that the pope sent to SPC Patriarch Irinej and the SPC Holy Synod last year, Amfilohije said it was "unique in our centuries-long relations and discussions."

"I thanked the episcope of Rome and said that such a letter seems as if it was written not in the second millennium of the history of Christianity, but in the first millennium, when we were one Church," the SPC dignitary said.

He reiterated that the pope's possible visit to Serbia was not discussed during the meeting in Rome last weekend.

"This was not discussed. The issue there was that mixed commission. Beside thanking him for his approach to such a serious question, we were also grateful for Vatican's position on Kosovo, and for it supporting Serbia in UNESCO," Amfilohije said.

Amfilohije revealed that he met Francis "earlier, in Argentina," and added:

"He is a simple man and I told him he was very much like our (late) Patriarch Pavle." The Theological Seminary of Zadar: On the occasion of its 400th anniversary (1615-2015)
The theological seminary at the monastery Krka dates from the time of the Patriarch of Pec Pajsije Janjevac (1614-1647). Metropolitan Teodor of Dabar-Bosnia, as the exarch of all of Dalmatia, in 1615, ordered that a theological school be founded in the monastery Krka.

Statehood Day and Patron Saint-Day of the Republic of Srpska A Dance of Death on the Streets of Belgrade
Metropolitan Amfilohije (Radovich)
It would be interesting to shed light upon what is hiding behind the very name, “pride parade,” from the psychological and anthropological point of view. Behind the verbal triumph and boastfulness of the societal demarche of “gay paraders,” is there not actually concealed the inner suffering, despair, and sadness of the parade’s participants?
Comments
×