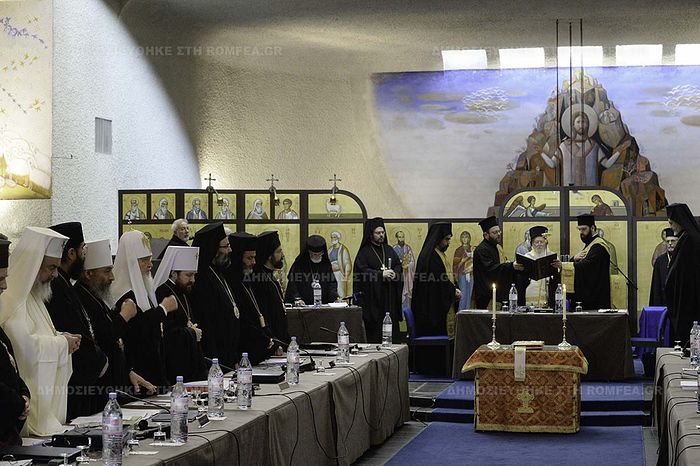 The Holy and Great Synod of the Orthodox Church will meet in June this year, according to the Athens News Agency-Macedonian Press Agency (ANA-MPA).

Of course, for the Holy and Great Synod of the Orthodox Church to meet in June, during the period of Pentecost (06/19/2016), the Primates in Geneva must definitely choose the themes and regulations.

The decision to convene the Holy and Great Synod of the Orthodox Church in Crete, rather than at the headquarters (Constantinople) of the Ecumenical Patriarchate, was dictated by the "exceptional objective circumstances" (i.e. the recent Russo-Turkish crisis), which basically prevents the Moscow Patriarch Kyrill and his delegation from visiting the City. That is why this Synaxis of Primates is meeting in Geneva and not in the Phanar, as originally planned.

The gathering in Geneva involves eleven of the fourteen Primates, with their delegations. Three are missing: Patriarch John of Antioch, Metropolitan Savvas of Warsaw and All Poland for health reason, and Archbishop Ieronymos of Athens and All Greece for personal reasons. The work of the Synaxis will continue until January 28th.

The convocation, "barring the unexpected," of the Holy and Great Synod of the Orthodox Church this year in Constantinople was decided in March 2014 at the Synaxis of the Primates, which had gathered at the Phanar.

The themes of the Holy and Great Synod of the Orthodox Church includes the following ten topics:

2. The manner in which Autocephaly is assigned.

3. The manner of the administration of Autonomy in semi-independent Churches within the limits of Autocephalous Churches, such as the Orthodox Church of Finland under the jurisdiction of the Ecumenical Patriarchate.

4. The Diptychs. This is the order of the Autocephalous Churches, according to honor and ranking, by which the Primates are commemorated. The order of the Churches may change. (For example, the Church of Cyprus, although it is one of the most ancient and was recognized by the Third Ecumenical Synod in Ephesus in 431, is tenth in the order, having been surpassed by Patriarchates, which have been granted Autocephaly in recent times by the Ecumenical Patriarchate and not by an Ecumenical Synod.)

6. Canonical marriage impediments, especially in the case of Inter-Christian marriages.

7. Fasting. Ex. Should the canons for fasting on Wednesdays and Fridays be changed?

8. The relationship of the Orthodox Churches with the rest of the Christian world.

9. Orthodoxy and the Ecumenical Movement.

10. The contribution of local Orthodox Churches in the prevalence of Christian ideals of peace, freedom, brotherhood and love among people and removing racial and other discrimination.

The Ecumenical Patriarch Bartholomew, in his introductory speech at the opening session of the Synaxis in Geneva, stressed that "the great responsibility belongs to us now, without further delay, to convert this vision [of the Holy and Great Synod of the Orthodox Church] into a reality." Patriarch Kirill has proposed a Pan-Orthodox Council on Mount Athos Ecumenical Patriarch: “The Holy and Great Synod is of direct and vital interest both for the Orthodox, and for the rest of the Christian world”
Referring to the fact that even before the meeting of the Holy and Great Synod, some “fighters for Orthodoxy” call it a robber council, the Ecumenical Patriarch asked what kind of authority will its decisions have, and what will be the canonical consequences for disobeying the decisions. Ecumenical Patriarch Convenes Synaxis at Chambésy, Geneva
The Synaxis will deal with matters related to preparation for the Holy and Great Council, which has been decided to convene this year. His Eminence Geron Archbishop Demetrios of America will be a member of the Delegation of the Ecumenical Patriarchate.
Comments

It is clear to most Orthodox Laity that any agreement a singular Patriarchate attempts on his own is void and against the word and spirit of Orthodoxy, no matter how much pomp is presented.

NMGOM5/3/2016 7:40 pm
With regard to Roman Catholicism, I would like to see the issues addressed of:
1) Validity of their sacraments;
2) Inter-communion (and other sacraments);
3) Use of RC churches by Orthodox, who may be too far remote from an Orthodox Church for routine practical attendance.

Alexey2/26/2016 3:44 am
Looking at the preparation for this Holy and Great Council it seems that our unity is in the name alone, since most of the real and important questions will not be discussed for example granting of Autocephally which is pretty much blocked by Constantinople due to Papal ambitions. For example Orthodox Church of America was granted Autocephally by her mother Church, the Russian Orthodox Church in 1970's and OCA is not being recognized as the 15th local Orthodox Church mainly because of the position of His All Holiness Ecumunical Patriarch Bartholomew who has a mind set of a Roman Catholic Pope and believes that it is Constantinople that should have that right. In all the reality however all bishops sit on Peter's throne and all are equal just like all Orthodox Churches are equal and the title of first amongst equal does not give a privilage to ignor the 2000 year old tradition. Another important topic that will not be discussed is the diptych which is a list of names used by an autocephalous church to commemorate the primates of all the world's autocephalous churches.The list should look something like this:
Autocephalous Church
1. Constantinople
2.Alexandria
3. Antioch
4. Jerusalem
5. Russian
6. Georgian
7. Serbian
8. Romanian
9. Bulgarian
10. Cyprus
11.Church of Greece
12. Albania
13. Polish
14. Czech Lands and Slovakia
15.American and Canadian

Fr. Remus Bleahu1/27/2016 10:09 pm
We need to pray for inspiration and the guidance of the Holy Spirit to be a success in the Orthodox Christian world.
May God be there and with them !

Matthew1/27/2016 2:23 am
Does anyone know where we may find out about the positions of each of these Primates on these issues?

Zaher Samaan1/25/2016 2:32 pm
I pray to our Lord Jesus Christ to inspire thier mind, eyes, and heart for loving of each other... For the unity of belief , work, and vision
"God may you save them one as we are one in trinity "
Pray for us our holy fathers, may God lead you to the fullness of love and belief to serve his parish very well
Amen