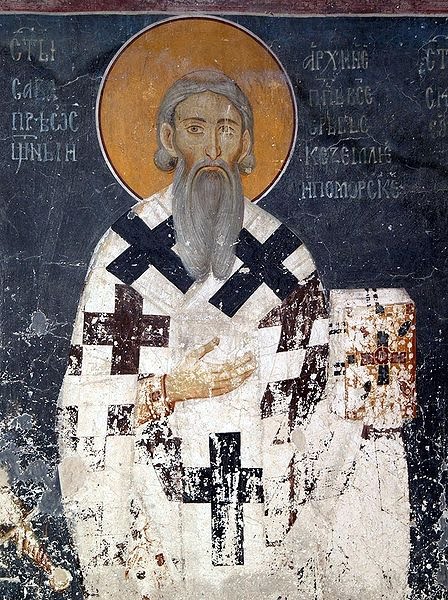 Today, January 14 on the Serbian Church’s calendar[1] we celebrate the memory of the Holy Hierarch Sava (1176-1235), ‘Venerable Holy Father and First Archbishop and Eternal Enlightener of the Serbs’[2] and ‘the greatest of Serbian national saints’.[3] Fr. Daniel Rogich calls him ‘the most beloved of all Serbian Orthodox saints, considered by all Serbs everywhere and at all times as the ultimate expression and example of what it means to be fully human, that is, what it means to be a devout and committed follower of Jesus Christ.’[4] Sir Dimitri Obolensky has said of St. Sava:

The historian who attempts to write the life of this central figure in Serbia’s medieval history may well feel apprehensive at the sheer range of Sava’s activities. He will be discouraged by his many guises: successively a provincial governor, an Athonite monk, and an archbishop; a diplomat entrusted with delicate missions by his brother the king; a founder of several monasteries and the organizer of their liturgical life and discipline; a legislator in the field of canon law; the first primate of Serbia’s autonomous Church; a voyager on the pilgrim-routes of the eastern Mediterranean; his country’s earliest articulate writer; the focus of a posthumous cult that spread throughout the Balkan peninsula and even captured some of its Muslim population later on; Serbia’s unrivalled patron saint; a semi-legendary figure right down to the present day, celebrated in folklore, poetry, and song; his mythopoeic sway must be unique in eastern Europe; and all this, and a wider compass still, are there to daunt his biographer.[5]

Here is the account of St. Sava’s life in the Prologue:

The son of Stefan Nemanja, the great Serbian national leader, he was born in 1169. As a young man he yearned for the spiritual life, which led him to flee to the Holy Mountain, where he became a monk and with rare zeal followed all the ascetic practices. Nemanja followed his son’s example and himself went to the Holy Mountain, where he lived and ended his days as the monk Simeon. Sava obtained the independence of the Serbian Church from the Emperor and the Patriarch, and became its first archbishop. He, together with his father, built the monastery of Hilandar and after that many other monasteries, churches and schools throughout the land of Serbia. He travelled to the Holy Land on two occasions, on pilgrimage to the holy places there. He made peace among his brothers, who were in conflict over their rights, and also between the Serbs and their neighbours. In creating the Serbian Church, he created the Serbian state and Serbian culture along with it. He brought peace to all the Balkan peoples, working for the good of all, for which he was venerated and loved by all on the Balkan peninsular. He gave a Christian soul to the people of Serbia, which survived the fall of the Serbian state. He died in Trnovo in the reign of King Asen, being taken ill after the Divine Liturgy on the Feast of the Theophany in 1236. King Vladislav took his body to Mileševa, whence Sinan Pasha removed it, burning it at Vračar in Belgrade on April 27th, 1595.[6]

On the burning of St. Sava’s relics, Bishop Athanasius (Jevtić) comments, ‘As a folk poem says, Sinan Pasha thought that in this way he would destroy the saint’s memory among the people, but St. Sava’s dust was scattered throughout Serbia and thus the saint is celebrated as a martyr after his death.’[7] On this note, at the end of his superb brief biography of St. Sava, Obolensky makes some interesting comments about what he earlier calls the Saint’s ‘mythopoeic sway’ [8]:

It is perhaps not wholly fanciful to suppose that the physical destruction of Sava’s body was in part responsible for the volatile and timeless character of his posthumous image. In the Serbian countryside his footprints are still shown to the visitor, and many a freshwater spring, endowed with healing properties, is named after him. Not surprisingly, signs of his supernatural presence are especially frequent in the neighbourhood of Studenica. In Serbian epic poems, folktales, legends, and songs, Sava appears in many guises: as monk, beggar, sower, boatman, traveler—especially by sea—hunter, shepherd, physician, invincible fighter against the invading Turks, and—in a truly timeless incarnation—as lord of the wolves.[9]

To this last, provocative statement is added the following footnote:

... In pre-Christian times the Serbs venerated the wolf as their totem. Vasko Popa, the modern Yugoslav poet, has written a cycle of poems entitled ‘St. Sava’s Spring’, in which the patron saint of Serbia is portrayed as a wolf-shepherd, the healer and protector of the wolves, which represent the Serbian people.[10]

The Saint’s own disciple and biographer, the Hilandrian monk Domentijan, has aptly explained St. Sava’s significance in his Life of his Elder:

Because of his sincere faith in Christ, the Lover of Love Himself lived in his heart, in accordance with the word of the divine apostle who had said ‘in Whom are hid all the treasures of wisdom’, this treasure was hidden at the bottom of [his] heart, because God Himself said: ‘Blessed are the pure in heart, for they shall see God’, for He Himself is hidden in the heart of the one who loves Him and believes in Him. For this reason he gave up the earthly kingdom to acquire that precious treasure on earth, by which he enriched himself, his parents, and, also, his native land, burning with the Holy Spirit and continuously praying to the Lord to show him the road to salvation.[11]

Thus, as St. Justin (Popović) observes, ‘Saint Sava’s ideal and plan for the whole nation was: “Give up everything for Christ, but Christ for nothing.”’[12]

Domentijan tells us that a disciple of St. Sava named Atanasije delivered a eulogic hymn to the Saint (obviously based in the opening lines on the second Eirmos from the 9th Ode of the Paschal canon) on the occasion of the return of his relics from Trnovo to the Monastery Mileševa in Raška. Here is Fr. Mateja Matejić’s translation of this eulogy:

O divine, O beloved,
O sweet and most holy voice,
O God-glorifying Sava,
you have firmly promised
to be with us until the end of this world,
O divinely-adorned Sava,
and we, your beloved children,
who have you as our strength
and our divinely inspired hope,
are rejoicing now.
O what a wonder, brethren,
more splendid than any other wonder,
awesome and filled with ineffable amazement.
O, great is the power of God
and ineffable are His wonders,
so that one who loves God
and abides by His will
cannot be destroyed even by the grave
and the earth cannot imprison him.
Moreover, even during his lifetime
the sea itself
was obedient to him,
and after his death,
death did not affect
his God-bearing body.
But, moreover, like an aromatic lily
it grew on the fragrances of his virtues
which blossomed from his youth,
and, as the prophet said:
‘his body did not undergo decomposition’ (Acts 2:31).[13]

[1] The 14th is the day St. Sava is commemorated by the Serbs. In the Russian Church, he is commemorated on the 12th. Here is an interesting post by Fr. Gregory Edwards on the Serbs' celebration of his feastday in Thessaloniki in 2009. Mayor of Chicago Proclaims Saint Sava Academy Day
The Mayor’s proclamation also noted that Saint Sava Academy is “the only full-time elementary school in Chicago offering dual language education in both Serbian and Russian languages,” “offers a safe community where students are able to express their culture and religious beliefs,” and “sustains an Orthodox faith-based education that provides students a strong spiritual compass both inside and outside the classroom.” NGO protests against celebrating St. Sava’s Day in Serbian schools
The Movement for Enlightened Society NGO has said that the marking of St. Sava's Day as the patron saint day of schools "violates the principle of secularity."