Of What Spirit Are We?

Today there are many “hotheads” around, who think that the law of might is the right law, and therefore we have to bring people to a state of fear and horror, to use the maximum force for reaching our goal. This occurs on the interpersonal as well as on the international level.

There is a story in the Gospels: And it came to pass, when the time was come that he should be received up, he steadfastly set his face to go to Jerusalem, and sent messengers before his face: and they went, and entered into a village of the Samaritans, to make ready for him. And they did not receive him, because his face was as though he would go to Jerusalem. And when his disciples James and John saw this, they said, Lord, wilt thou that we command fire to come down from heaven, and consume them, even as Elias did? But he turned, and rebuked them, and said, Ye know not what manner of spirit ye are of (Lk. 9:51-55).

Of what spirit are we? What does the Savior call us to do? And how should a government act in this world? Is force justified? Archpriest Oleg Stenyaev talks about this subject. 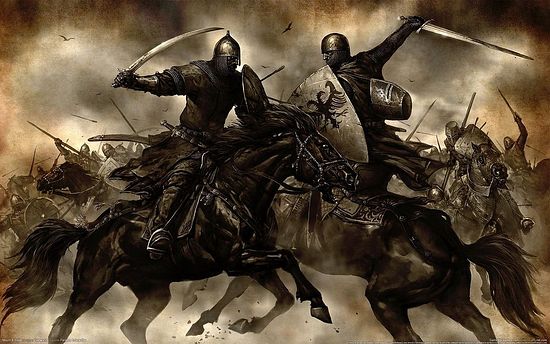 Sometimes we Christians in fact forget what times we are living in and what spirit is moving us. The Orthodox annotated Bible by Lopukhin explains this episode from the Gospels according to Luke: “At the exclamation of the sons of Zebedee, whom the Lord Himself calls “sons of thunder,” who desired like the Prophet Elias to bring down fire upon the unreasonable Samaritans, the Lord replies that they obviously do not understand that as disciples of Christ living in the New Testament and not the Old as did Elias, they should not have recourse to the same harsh measures for bringing people to reason as did the Old Testament prophets. St. Elias also had the Spirit of God, but that was a different Spirit, which manifested Itself differently from the Spirit under which the disciples of Christ are now found to be.” The Lord did not leave His sons of thunder without instruction, and He taught them thus: For the Son of man is not come to destroy men's lives, but to save them (Lk 9:56). The holy fathers explain: “The Lord, showing them that His Law is higher than the life of Elias, forbids them, and leads them away from this way of thinking; and, to the contrary, teaches them to endure offenses with meekness” (Blessed Theophylact).

With regard to military conflicts—they are sinful by definition. Thus, for example, St. John Chrysostom says, “Because wars continually grow from the root of sins, the guardians of the laws and precise observers of justice, who reign in the greater part of sins, can destroy also the causes of war.” That is, it is very important when we help people to be freed of sins and we ourselves overcome sinfulness in our own lives, because for many, such militaristic tendencies are simply the relapse of personal sinful corruption.

St. Isidore of Pelusium writes: “Although the killing of enemies is considered a lawful deed, and monuments are erected to the victor, exalting their service, nevertheless if we explore the close relationship between people, then it (killing) is not without guilt; and that is why Moses prescribed that the man who has killed people in war should make use of purifications and sprinkling.” And we know the First Canonical epistle of St. Basil the Great, rule 13, where it says, “Our fathers did not consider killing done in battle as murder, excusing, as I see it, the warriors of chastity and piety. But perhaps it would be good to advise that they, as ones having unclean hands, refrain from receiving the Holy Mysteries for three years.” That is the strict decision expressed by St. Basil the Great—no matter what military conflict a person participates in, as one soiled by human blood he should refrain from receiving Holy Communion. Although we directly confess and give Communion to people during military conflicts, they should definitely later carry out a penance.

Unfortunately there are very few left today who know first hand what war is. If these people were alive, they would snuff out any militaristic tendencies at the onset. But some people seem to have warheads instead of heads, and they should be aware of how horrific any military conflict is. People of the older generation, who lived through the war, were under German occupation, experienced the horrors of war, and understood the danger of militaristic inclinations. As we know, in the Soviet Union even war propaganda was forbidden. But now a new generation has grown up that is used to “extra lives” in computer games. They all think that if they die they can then “use” a second life, then a third, and so on. But that is not how it is in reality.

The new generation consists of people who have no personal experience of such sinful manifestations as military conflict. Therefore they must, as it is written in Holy Scripture, seek peace, strive for peace. And we should pray that peace might be preserved in our land, and so that situations of conflict might be resolved politically—this is better than rushing into extreme measures.

But let’s remember that Blessed Augustine wrote about how we may and may not act in a situation that can turn into war. Firstly, “According to the one who serves to maintain peace among mortals in the natural order, it is necessary that the right to plan and declare war belong to those who possess the highest authority.” That is, if society is forced to have recourse to such measures as military action, then this should not happen spontaneously. Secondly, Augustine insists that there should be rightious reasons; specifically, that the attacked have been attacked, and the attackers deserve this because of their action. Therefore Augustine says, “War is fair when it is the reward for injustice, when a people or country should be punished for the evil they have done, or to return lands unfairly seized.” That is, it is necessary that the warring side have the right intentions, because as Augustine testifies, “True religion supposes those wars to be peaceful that are the punishment of evil-doers and the confirmation of goodness.” However, “The passion for causing injury, the cruel thirst for revenge, pitilessness and implacability, feverish loathing, the desire for power, and everything like these is justly considered the curse of war.”

Therefore, as long as there is a possibility, people should withstand militaristic inclinations. First of all, every person should overcome such inclinations in himself, and ask God to preserve peace—if only for the sake of our ancestors who themselves experienced the burden of those terrible war years. The Peacemakers
Metropolitan Younan al-Souri of Zahleh
Let us ask for the indwelling of the Spirit of the Lord within us through the obedience of the Word, loving in God the Father, along the path of true repentance and our abiding in God through our surrendering ourselves completely to Him, so that God may be "all in all"... Peacemaking In a Troubled World
Fr. Ted Bobosh
Peace is to rule in our hearts, even if we have to confront evildoers and those who disturb the peace. We should defend what is good and right without losing the peace that comes from Christ.
Comments

Castrese Tipaldi1/31/2016 3:53 pm
The Holy Prophet Elias had not a different Spirit. How can the Spirit of God be different? How can He change?

The Holy Spirit did work for the salvation of men not less at the times of Elias, which were preparatory, destroying with fire the worshipers of the enemy who had corrupted the people chosen to be the cradle in the flesh of the Saviour.

The spirit whom the Lord refers when rebuking the sons of thunder is the spirit of the adversary, because they spoke out of pride and self-righteousness, without discernment, willing to force God's salvation upon men and take away the supreme gift given to man by His Creator: free will!

In short, they were eager to give a sign, specular to those requesting a sign from Christ.

In this sense, they "know not of what spirit are of" and what Spirit they are instead called to harbor.

When facing the problematic of war, another passage of the Gospel is enlightening:
"But now.......... and he that hath no sword, let him sell his garment, and buy one."
×