Source: The Ecumenical Patriarchate of Constantinople 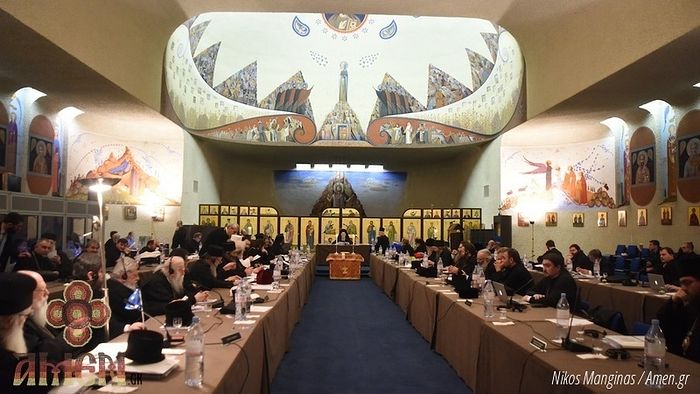 SYNAXIS OF THE PRIMATES OF THE ORTHODOX CHURCHES
Chambésy, 21-28, 2016

The following Primates were unable to attend: Their Beatitudes Patriarch John X of Antioch and Metropolitan Sawa of Warsaw and All Poland, for health reasons, and Archbishop Ieronymos of Athens and All Greece, for personal reasons. Nevertheless, all three were represented by official delegations of their Churches.

The Primates of the Orthodox Churches convened to finalize the texts for the Holy and Great Council. In the framework of the Synaxis, on Sunday, 24th January, a Divine Liturgy was held at the Holy Stavropegic Church of St. Paul. Along with the Ecumenical Patriarch, who presided, Their Beatitudes and Heads of the delegations of the Orthodox Churches concelebrated the Liturgy, with the exception of the Head of the delegation of the Patriarchate of Antioch.

During the Synaxis, whose sessions were held in the apostolic spirit of “speaking the truth in love” (Eph. 4.15), in concord and understanding, the Primates affirmed their decision to convene the Holy and Great Council. The Council will be held at the Orthodox Academy of Crete from June 16th to 27th, 2016. To this end, the Primates humbly invoke the grace and blessing of the Holy Trinity and fervently invite the prayers of the fullness of the Church, clergy and laity, for the period leading to and the sessions of the Holy and Great Council.

The items officially approved for referral to and adoption by the Holy and Great Council are: The Mission of the Orthodox Church in the Contemporary World, The Orthodox Diaspora, Autonomy and its Manner of Proclamation, The Sacrament of Marriage and its Impediments, The Significance of Fasting and its Application Today, and Relations of the Orthodox Church with the Rest of the Christian World. By decision of the Primates, all approved documents will be published.

The Primates also discussed and determined the establishment of a Panorthodox Secretariat, the by-laws of the Council, the participation of non-Orthodox observers in the opening and closing sessions, and the budgetary costs related the Council.

Moreover, the Primates expressed their support for the persecuted Christians of the Middle East and their ongoing concern for the abduction of the two Metropolitans, Paul Yazigi of the Patriarchate of Antioch and Gregorios Yohanna Ibrahim of the Syriac Archdiocese.

The proceedings of the Synaxis of the concluded on Wednesday evening, January 27th, 2016, with the closing address by its President, His All-Holiness Ecumenical Patriarch Bartholomew.

At the Orthodox Center of the Ecumenical Patriarchate in Chambésy-Geneva, 27th January, 2016
From the Secretariat of the Sacred Synaxis

The Ecumenical Patriarchate of Constantinople Homily By His All-Holiness Ecumenical Patriarch Bartholomew During the Divine Liturgy at the Church of St. Paul (Chambésy-Geneva, January 24, 2016)
Ecumenical Patriarch Bartholomew
"Our Eucharistic Synaxis in the celebration of the Sacred Mysteries forms the basis and principal source of every other activity – whether administrative, pastoral, charitable or other – that essentially comprise an extension of the Divine Liturgy, the liturgy beyond the liturgy or the liturgical ministry, also extending to every detail and dimension of human life."
Comments

John-Albert Dickert 1/30/2016 9:55 am
I humbly invoke the grace and blessing of the Holy Trinity and fervently invite the prayers of the fullness of the Church, clergy and laity, for the period leading to and the sessions of the Holy and Great Council. My prayers and fasts will be made in the hope that we find understanding in our differences and unity in our similarities. For we all share in the common faith that Christ has died, risen, and will come again in judgement of the living and the dead


Blessings to You All
John-Albert Dickert
Church of Our Savior
Episcopal Church
Cincinnati, Ohio USA 45219