Pan-Orthodox Council: The Sacrament of Marriage and Its Impediments 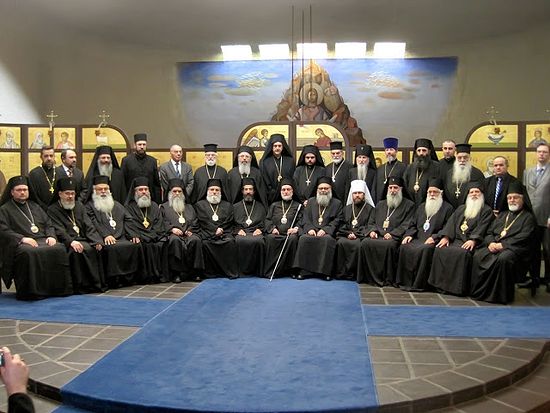 It is published by the decision of the Synaxis of the Primates.

1) The institution of the family is threatened today by such phenomena as secularization and moral relativism. The Orthodox Church asserts the sacral nature of marriage as her fundamental and indisputable doctrine. The free union of man and woman is an indispensable condition for marriage.

2) In the Orthodox Church, marriage is considered to be the oldest institution of divine law since it was instituted at the same time as the first human beings, Adam and Eve, were created (Gen. 2:23). Since its origin this union was not only the spiritual communion of the married couple – man and woman, but also assured the continuation of the human race. Blessed in Paradise, the marriage of man and woman became a holy mystery, which is mentioned in the New Testament in the story about Cana of Galilee, where Christ gave His first sign by turning water into wine thus revealing His glory (Jn. 2:11). The mystery of the indissoluble union of man and woman is the image of the unity of Christ and the Church (Eph. 5:32).

3) The Christ-centered nature of marriage explains why a bishop or a presbyter blesses this sacred union with a special prayer. In his letter to Polycarp of Smyrna, St. Ignatius the God-Bearer stressed that those who enter into the communion of marriage “must also have the bishop’s approval, so that their marriage may be according to God, and not after their own lust. Let everything be to the glory of God” (Poly. 5).The sacred nature of the God-established union and its lofty spiritual content explain the Apostle’s affirmation: Marriage should be honored by all, and the marriage bed kept pure (Heb. 13:4). That is why the Orthodox Church condemned any defilement of its purity (Eph. 5:2-5, 1 Thes. 4:4, Heb. 13:4ff).

4) The union of man and woman in Christ constitutes ‘a small church, an image of the Church’. Clement of Alexandria affirms: “Who are the two or three gathered in the name of Christ in whose midst the Lord is? Does he not by the "three" mean husband, wife, and child?” (Stromata, 3.10, PG 8, 1169 В). Through God’s blessing, the union of man and woman is elevated, for communion is above individual existence as it introduces the spouses to a life in the image of the Kingdom of the Holy Trinity. A necessary condition for marriage is the faith in Jesus Christ to be shared by a bridal pair, husband and wife. The foundation of unity in marriage is unity in Christ, so that the marital love blessed by the Holy Spirit may reflect the love of Christ and His Church as a mystery of the Kingdom of God and the eternal life of humanity in the love of God.

5) The protection of the sacral nature of marriage has always been of crucial importance for the preservation of the family which reflects the communion of those tied by conjugal bonds both in the Church and in the whole society. Therefore, the communion accomplished in the sacrament of marriage is not simply a natural conventional relationship but a creative spiritual force realized in the sacred institution of the family. It is the only force that can ensure the protection and education of children both in the spiritual mission of the Church and in the life of society.

6) It was always with necessary strictness and proper pastoral sensibility, in the manner of St. Paul, Apostle of the Gentiles (Rom. 7:2-3; 1 Cor. 7:12-15, 39) that the Church treated both positive conditions (the difference of sexes, legal age, etc.) and impediments (kinship by blood and affinity, spiritual kinship, an already existing marriage, difference in religion, etc.) for the conclusion of a church marriage. Pastoral sensibility is necessary not only because the biblical tradition links marriage with mystery of the Church, but also because the church practice did not exclude certain principles of the Greek-Roman natural law, which stressed that the conjugal bonds between man and woman is “a communion of the divine and the human law” (Modestin) and are compatible with the sacred nature attributed by the Church to the mystery of marriage.

7) In today’s situation so unfavourable for the sacrament of marriage and the sacred institution of family, bishops and priests should actively develop pastoral work to protect the faithful by supporting them, asserting the institution of family on a solid foundation that cannot be destroyed either by rain or streams or winds, since this foundation is the rock which is Christ (cf. Mt. 7:25).

8) Marriage is the heart of the family, and the family is realization of marriage. In today’s world, a real threat to Orthodox Christians is constituted by the pressure to recognize new forms of cohabitation. The deepening crisis of marriage is a matter of profound concern for the Orthodox Church not only because of negative consequences for the whole society and a threat to internal family relationships, the principal victims of which are married couples and, in the first place, children because regrettably they usually begin to martyr innocently from their early childhood.

9) A civil marriage between a man and a woman registered in accordance with the law lacks the sacramental nature and as a legalized cohabitation differs from a marriage blessed by God and the Church. The members of the Church who contract a civil marriage should be treated with pastoral responsibility necessary to make these people become aware of the value of the sacrament of marriage and its blessing.

10) The Church does not deem it possible for her members to contract same-sex unions or enter into any other form of cohabitation except marriage. The Church exerts all possible pastoral efforts so that those of her members who enter into such unions may come to true repentance and love blessed by the Church.

11) The grave consequences brought about by the crisis of the institutions of marriage and family are expressed in the offensive growth in the number of divorces and abortions and in the increase of other problems of family life. These consequences constitute a great challenge to the mission of the Church in the modern world. Therefore, the pastors of the Church should exert all possible efforts to address these problems. The Orthodox Church with love calls upon her faithful, men and women and all people of good will, to safeguard the fidelity to the sacred nature of the family.

2. On impediments to marriage

1. Concerning the impediments to marriage due to kinship by blood, kinship by affinity and adoption and spiritual kinship, the prescriptions of canons (Canons 53 and 54 of the Council of Trullo) and the church practice derived from them are valid as applied today in the autocephalous Local Orthodox Churches and determined and described in their Statutes and respective decisions of their Synods.

2. A marriage that is not completely dissolved or annulled and a third marriage constitute an absolute impediment to the conclusion of marriage in conformance to the Orthodox canonical tradition which categorically rejects bigamy and the fourth marriage.

3. In accordance with the acrivia of holy canons, entering into a Church marriage after monastic vows is forbidden (Canon 16 of the Fourth Ecumenical Council and Canon 44 of the Council of Trullo).

4. The priesthood constitutes an impediment to marriage in accordance with the canonical tradition in force (Canon 3 of the Council of Trullo).

a) The marriage of an Orthodox Christian with a non-Orthodox Christian is forbidden in accordance with the canonical acrivia and is not celebrated in the Church (Canon 72 of the Council of Trullo). It can be blessed out of indulgence and love of man if the children from this marriage are to be baptized and raised in the Orthodox Church.

b) The marriage between Orthodox Christians and non-Christians is categorically forbidden in accordance with the canonical acrivia.

6. The practice used in application of the church Tradition with regard to impediments to marriage should take into account the prescription of the state legislation in force without going beyond the limits of the church oikonomia.

7. The Holy Synod of each autocephalous Orthodox Church should practice church oikonomia in conformance with the principles established in church canons, in the spirit of pastoral discernment for the service of the salvation of man. Married Life and Asceticism
Deacon Pavel Serzhantov
It all began with our forefathers, Adam and Eve. They received a commandment in paradise not to taste of the tree of the knowledge of good and evil (cf. 2:17). The commandment not to “taste of this or that” is quite well known to any Orthodox Christian. This is the commandment to fast—the most ancient, beginning factor of family life.
Comments

Mark Citadel2/3/2016 6:23 pm
This is a really strong statement, and I applaud these blessed men for drawing this up. One point:

"In today’s situation so unfavourable for the sacrament of marriage and the sacred institution of family, bishops and priests should actively develop pastoral work to protect the faithful by supporting them, asserting the institution of family on a solid foundation that cannot be destroyed either by rain or streams or winds, since this foundation is the rock which is Christ"

But what is the Church doing to change that unfavorable situation? This is not a situation that needs to exist. Of course it is the Church's pastoral responsibility to care for particularly men who are suffering at this time, but we must address the source of that suffering, and that is I am sad to say the foundational structuring of Orthodox society by secular governments. It is coming very close to the time when the Russian Orthodox Church needs to make a strong claim to its birthright, that of the state Church of Russia, of which it was ruthlessly pillaged by the Leninist regime, which slaughtered the sainted Tsar.

The Church needs to clean itself of corruption and bad faith activities, and then apply pressure for re-establishment. A society in which priests have been removed from their civic role is a society which will fail its citizens.

Dr. David C. Ford2/3/2016 5:17 am
Thanks be to our All-Gracious LORD and to all the bishops for this strong, wise, and very pastoral statement.

Bishop Tikhon2/2/2016 11:29 pm
I disagree with the patent refusal to recognize that acrivia is as much oikonomia as indulgence is. It is wrong to oppose oikonomia to acrivia. When we sing "Glory to Thine Economy" in the Resurrectional tone one troparion, we sing of God's management of His household. No one should exclude acrivia from God's Economy! Unfortunately, our translators translated Oikonomia (Economy) as "dispensation!!!" A presbyter (or hierarch) may impose a much stricter penance than is foreseen in any given Holy Canon. THAT IS OIKONOMIA.
×