Rev. John D. Romas, who experienced the complete and total destruction of his home parish of St. Nicholas Greek Orthodox Church in New York City passed away on January 24th and was buried at a special service celebrated by Archbishop Demetrios, head of the Greek Orthodox Archdiocese of America.

An immigrant from Dorvitsa, a village in central Greece, he emigrated to the United States in 1952. He was ordained a priest in 1984 and three years later, was appointed by then Archbishop Iakovos to lead the tiny community in Lower Manhattan, which was one of the first churches founded in the city by Greek immigrants who settled in the neighborhood’s tenement houses.

He led the parish, comprised mainly of descendants of those early immigrants, until the church was destroyed. So connected to St. Nicholas were his approximately 50 parishioners, that they traveled on Sundays from other parts of New York, even far out in the suburbs, to attend the parish their parents and grandparents had founded.

Fr. Romas preserved St. Nicholas as a parish, serving the needs of his parishioners, but also transformed the church into a retreat and sanctuary during the week for thousands of Orthodox Christians who worked in the vicinity of Wall Street and New York’s bustling financial district.

Fr. John wasn’t in the church on Tuesday morning, September 11, when the attack occurred. The church was crushed from falling debris, making it the only house of worship destroyed on 9/11. Shortly after the terrorist attacks, he managed to enter the condemned space and collect what ws left of the church, including part of the wooden kouvouklion, or funeral bier that is used in Greek Orthodox Churches during Good Friday services to commemorate the funeral procession of Jesus Christ. 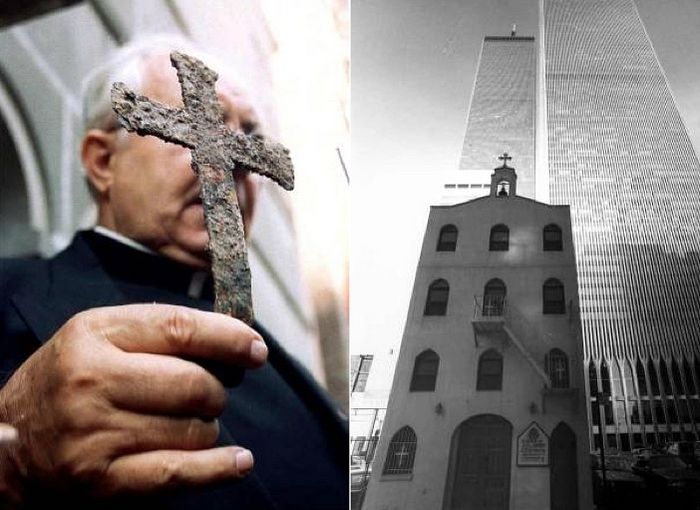 He also discovered a metal cross that was part of the church decor.

He served as the early face of the efforts to rebuild the community for years following the disaster until the Archdiocese took over the campaign.

Construction finally commenced last year for the rebuilding of St. Nicholas, which sadly, Fr. John will never see. But his memory will live on, as the community plans to house a new kouvouklion in the church, dedicated to their beloved Fr. John Romas. St. Nicholas Greek Orthodox Church To Be Rebuilt At Ground Zero
"With this agreement, we are continuing New York's collective healing, restoration, and resurgence," Cuomo said in a statement. "Now we are finally returning this treasured place of reflection to where it belongs."
Comments
×