Saint Gildas the Wise of Wales, Abbot of Rhuys in Brittany

An icon of St. Gildas the Wise
St. Gildas, generally known as Venerable Gildas the Wise (c.500-c.570) was born in the year when the Britons defeated the Saxons at the battle of Mount Badon (most scholars presume that this took place in the 490s near the city of Bath in Somerset). There are two Lives of St. Gildas, written in the ninth and twelfth centuries by an anonymous monk of Rhuys and the Welsh cleric Caradoc of Llancarfan respectively.

According to the most popular version, the future saint was born in Scotland, in what is now Dumbarton on the banks of the River Clyde, but according to another version, his birthplace was in North Wales. Gildas was descended from a wealthy British family. In his youth St. Gildas was married but was later widowed. The saint became a close disciple of St. Illtyd in South Wales in his famous Llanilltud Fawr Monastery in the Vale of Glamorgan, and it was there that Gildas was tonsured a monk. Such great saints as Sts. Samson and Paul Aurelian may have studied in Llanilltud together with him.

After Wales Gildas most probably continued his spiritual education and gained experience in Ireland where, specifically, he lived and preached in Armagh. On the Emerald Island he was ordained a priest. After Ireland the saint travelled to “the north of Britain” (that is, North Wales) where he zealously evangelized and performed many miracles. 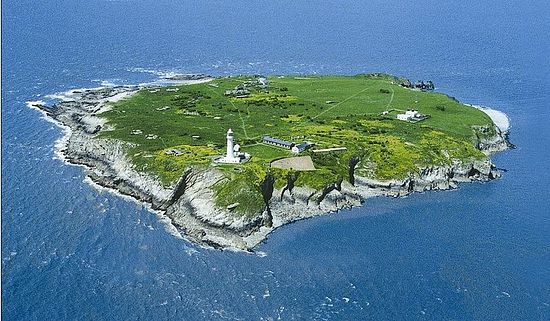 St. Gildas is regarded as one of the principal apostles of the Orthodox faith and early preachers of Wales, though very scarce details of his activities in the region survive. He was one of the most influential fathers of Welsh monasticism in the sixth century. Some biographers even attribute to him the composition of a monastic rule. One of the spiritual companions of Gildas was St. David of Mynyw, the patron-saint of Wales. Gildas most likely visited Ireland again about the year 565, where he preached the Gospel, built many churches and monasteries. The influence of this saint in Ireland was very strong and numerous Irish monks and ascetics were among his disciples. It is possible that for some time Gildas lived as hermit on Flatholm – an island in the Bristol Channel, situated off the coast of Cardiff in Wales. A number of other ancient ascetics of South Wales used to live on this island as well. It is quite possible that the holy man made a pilgrimage to Rome on one occasion. 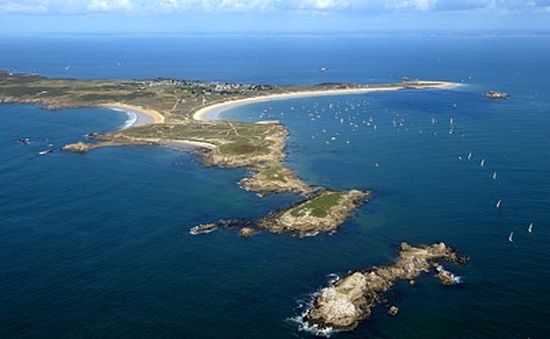 In the final stage of his life, Gildas moved to Brittany where he lived as anchorite on the isle known as Ile-d’Houat, devoting his time to prayer, abstinence and writing spiritual books. On the neighboring Rhuys Peninsula (now in the Morbihan departement, not far from Vannes) he founded a monastery and became its first abbot. The local people learned about the ascetic and soon believers came to love him, starting to visit his monastery continuously. The man of God reposed peacefully in Brittany around the year 570. It is known that the fame and influence of this saint spread all over Brittany, Wales, and Ireland as well as other countries. Gildas corresponded with monks from many monasteries in foreign countries. St. Gildas was eventually nicknamed “Gildas the Wise” for his learning and his numerous literary works. As was the case with other Celtic ascetics, the personal bell of Gildas was famous. 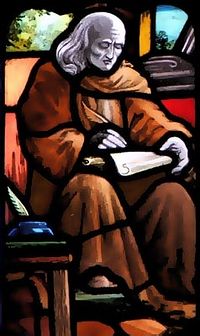 A stained glass of St. Gildas
Gildas is noted not only as a prominent ascetic, preacher, founder of monasteries and teacher of monks, but also as a spiritual author. He was an outstanding historian and chronicler of the Britons, and his main work is De Excidio et Conquestu Britanniae (“On the Ruin and Conquest of Britain”), was written in c.540. In this work Gildas strictly reproaches his compatriots the Britons, for whose sins Britain was attacked and invaded by Angles and Saxons. In this book the saint gives an account of British history from the Roman period until his own time (which makes him an invaluable source), describing the corruption and decline of faith among many of his contemporaries, including rulers and clerics. Later this book was cited by such distinguished historians as St. Bede of Jarrow and the learned monk Alcuin. The writings of Gildas reflect his profound knowledge of the Holy Scriptures, works of some authors of antiquity (for example, Virgil) and even books of Church Fathers of East and West, like St. Ignatius the God-Bearer of Antioch and St. John Cassian. But first of all, a holy man with a high level of culture is seen in his texts. Unfortunately, almost nothing survives of the literary works of Gildas, except for De Excidio, but they enjoyed great popularity in Wales, England and Ireland for many centuries. 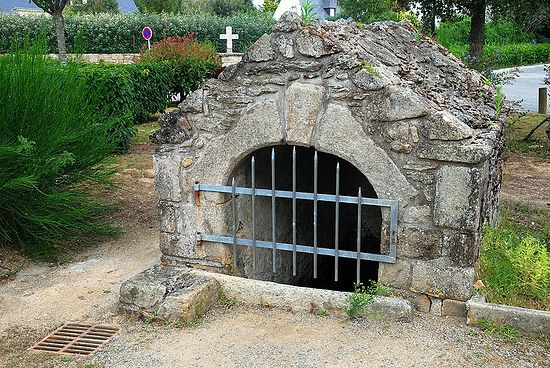 Today this celebrated saint is venerated in France, Wales and Ireland, but above all in Brittany. One of the main centers of his veneration is Saint-Gildas-de-Rhuys (named after him) in the Rhuys Peninsula, Morbihan, Brittany. The major relics of this saint were kept here in ancient times (and, according to later traditions, a portion of his relics was kept at Glastonbury in England where he may have labored for some time). In the eighteenth century a part of his relics was said to be preserved at Vannes Cathedral in Brittany. The wooden monastery founded by Gildas in Rhuys was rebuilt in the eleventh century in stone and the large abbey existed there more or less until the French Revolution, and the saint’s relics healed the mental diseases of numerous pilgrims. In 1796 the monastery was closed and in 1802 its church became a parish church. 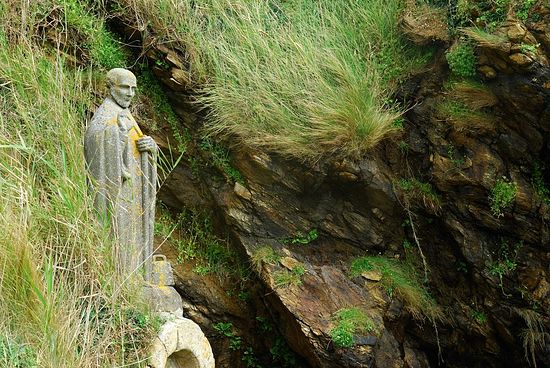 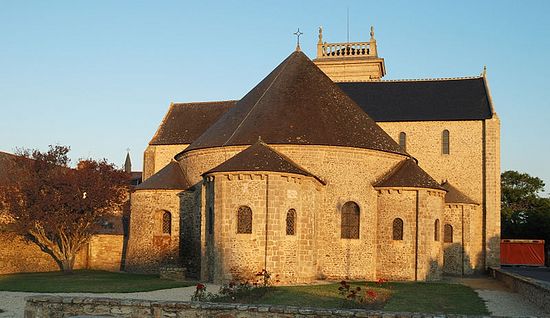 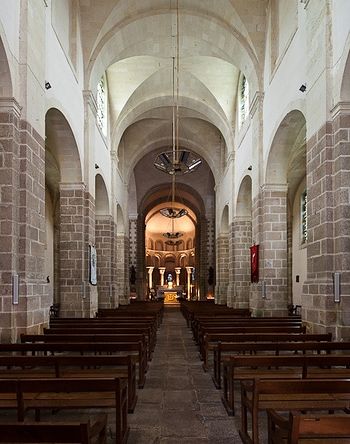 Inside the old Abbey Church of St. Gildas in Saint-Gildas-de-Rhuys, Brittany

Now a small Catholic convent is attached to it. Today there are the splendid Romanesque old Abbey Church of St. Gildas (possessing the stone tomb and a statue of St. Gildas among other treasures) and the holy well of St. Gildas in Saint-Gildas-de-Rhuys. There is a statue of this saint near Saint-Gildas-de-Rhuys, too. Other places in Brittany are also connected with him. Thus, a holy well in the Magoar commune, Cotes-d’Armor departement, is dedicated to him. Gildas is the patron-saint of a number of churches and monasteries across Brittany and other regions of France. A Catholic parish church in Rosneath village in Scotland (Argyll and Bute) is dedicated to St. Gildas. The library of Cambridge University preserves two manuscripts associated with him—copies of St. Gildas’ writings. 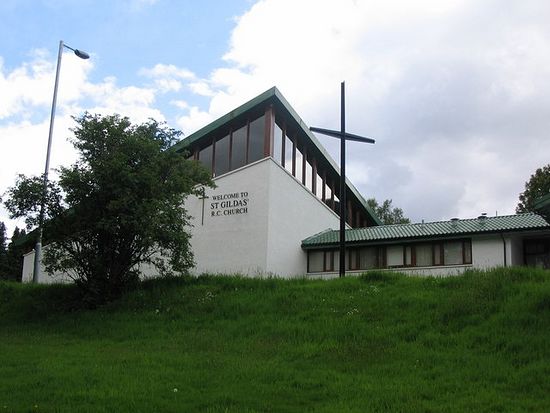 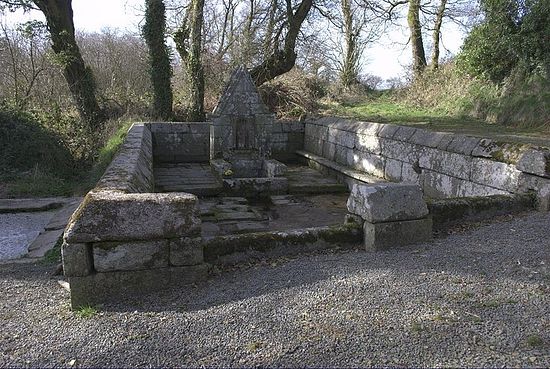 Venerable Father Gildas the Wise, pray to God for us! Holy Fathers Seiriol and Cybi of Anglesey in Wales
Commemorated February 1/14 (St.Seiriol); November 8/21 (St. Cybi)
Dmitry Lapa
St. Seiriol is one of a great multitude of island saints who led a solitary life in tiny hermits’ cells on small isles off the coasts of Wales, Scotland and Ireland. St. Cybi is along with St. Seiriol one of the most venerated saints in Anglesey.
Comments
×