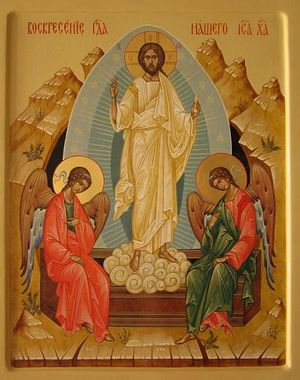 In the debate about the theological validity of Christian universalism one sometimes finds discussion about the meaning of the word “eternal” in Matthew 25:46. Christ there says plainly that the unrighteous “will go away into eternal punishment”, and the word here rendered “eternal” is the Greek aionion [αιωνιον]. Some suggest that the word simply means “age-long”, indicating that the punishment of the unrighteous will endure for an age and then come to an end, and they point out that the root of the word is aeon [αιων], meaning “age”. What are we to make of this?

Sometimes the word αιων does indeed mean “age” in the sense of a limited duration of time which comes to an end. Thus St. Paul in Romans 16:25: “God…is able to strengthen you according to my gospel and the proclamation of Jesus Christ, according to the revelation of the mystery that was kept secret for long ages [Greek αιωνιοις] and has now been manifested”. We see here that the word αιων means a limited duration of time, since the ages of time when the mystery had been kept secret came to an end when Christ appeared and was proclaimed by the apostles. Accordingly, one of the meanings of αιων in the Arndt-Gingrich lexicon is “a segment of time, age”. It can also mean “a world” as a spatial concept. Thus Hebrews 11:3: “By faith we understand that the worlds [Greek αιωνας] were created by the Word of God”.

But it can also mean everlasting, and as such it is applied to God and His dominion and power over all the cosmos, such as in 1 Timothy 6:16: “To Him [i.e. God] be honour and eternal [Greek αιωνιον] dominion”. Presumably God’s dominion is unending and everlasting. The debate about the precise meaning of aionion therefore cannot be solved simply by consulting a lexicon. The word varies in its meaning according to its usage.

Christ, of course, did not speak in Greek to His disciples but rather Aramaic, and the thought forms He used were those of first century Judaism, and it is to this culture therefore that we must look if we are to understand His words in their original context. In that conceptual universe, we find reference to “the age to come”. The world and its epochs were divided into this age and, after a decisive intervention by God, the age to come. Thus in the Pirke Aboth, the Sayings of the Fathers, we read, “Great is Torah for it gives to those that practise it life in this age and in the age to come” (6.7), and the saying of Hillel, “He who has acquired words of Torah has acquired for himself the life of the age to come” (2.8). We see the same division into the two ages in the Book of Enoch: “And he [an angel] said to me: ‘This is the Son of Man who is born unto righteousness…He proclaims to you peace in the name of the age to come” (chapter 71). For Christians the decisive divine intervention separating the two ages is the Second Coming of Christ and the resurrection of the dead—Christ’s return will divide everything into two unequal parts: this present age which is under the sway of death and injustice, and the age to come which will be under the rule of God.

Placed in this context, we can see that the word aionion in Matthew 25:46 means “age” in the sense of “the age to come”. Existence in that age to come will be qualitatively different than existence in this present age, for there will be a profound asymmetry between the two ages. For one thing, at the start of the age to come all the dead will be raised and restored to their bodies, so that life and death as we understand and experience them will be qualitatively different. Existence then will not simply be a prolonged version of existence as we experience it now. The aionion life of the righteous will not be simply unending. It will not be like our present mode of existence with the only difference that it will stretch on forever. As the life of the αιων to come, existence will indeed be unending, but for the righteous it will also partake of the immortal joy which will then fill that transfigured cosmos. And, says Christ, for the unrighteous existence will involve punishment—punishment that also partakes of the quality of the age to come. Like the life of the righteous, it will be unending. But it will be unending because it occurs in the age to come, and partakes of the coming age’s transfigured and eschatological quality. Note: both the life of the righteous and the punishment of the unrighteous are described with the same word aionion. The fates of both groups culminate in the age to come, and both groups partake of that age’s intensity and eternity. In the ongoing debate about the eternity of hell, this parallelism between the two groups must be given its due weight.

Another look into the conceptual and apocalyptic world of that time will confirm this. Scholars may debate the lexical roots of words and the ways in which the Fathers used certain terms, but the first and main question is how the disciples and the other original hearers would have understood our Lord’s words. They would have heard Him to some degree through the prism of their culture and informed by its literature. Thus, for example, when Christ spoke of the unrighteous being “bound hand and foot and cast into the outer darkness” (Matthew 8:12, 22:13, 25:30), these words would have been heard in same way as the words in the Book of Enoch 10:4: “The Lord said to Raphael, ‘Bind Azazel [a fallen angel] hand and foot and cast him into the darkness…And cover him with darkness and let him abide there forever and cover his face that he may not see light. And on the day of the great judgment he shall be cast into the fire.’”

Or consider the contrasting fates of the righteous and the unrighteous from chapter 103 of the same Book of Enoch: “And the spirits of you who have died in righteousness shall live and rejoice and their spirits shall not perish, nor their memorial from before the face of the Great One unto all the generations of the world…Woe to you, you sinners, when you have died if you die in the wealth of your sins…Into darkness and chains and a burning flame where there is grievous judgment shall your spirits enter and the great judgment shall be for all the generations of the world”. This kind of apocalyptic literature formed the conceptual prism through which our Lord’s words would have been understood. There is no hint of a final salvation for sinners present in such literature. Christ therefore would have been understood as offering no such final hope to sinners either.

The Greek word aionion means “partaking of the age to come”, both that age’s intensity and eternity. The stakes are very high, for both immortal joy or immortal horror await us children of men in the age to come. Reducing those stakes by introducing a hope not offered by Christ does not simply violate the meaning of this passage. It may also prove dangerous. Christ spoke in such a way as to motivate our run to righteousness and our avoidance of impending danger. We have no right to blunt His urgent warning. The Fathers and the Fire
Fr. Lawrence Farley

The Fathers and the Fire
Fr. Lawrence Farley
In this final blog article I will examine some of the Father’s teaching to see how they viewed the pain of hell being consistent with God’s love.