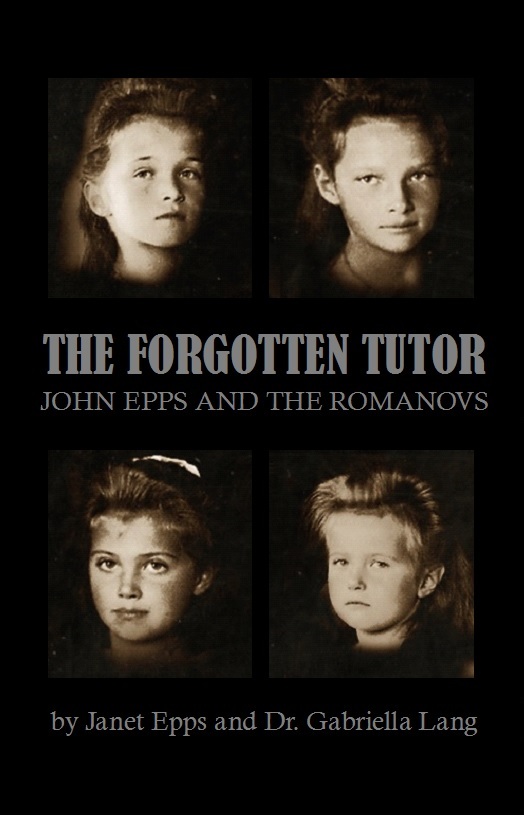 Gilberts Books - the publishing division of Royal Russia - is pleased to present its latest title - The Forgotten Tutor: John Epps and the Romanovs is the first book written about the virtually unknown tutor to the Grand Duchesses Olga, Tatiana, Maria and Anastasia, between the years 1905-1914.

In December 1914 the eldest daughter of the last Tsar sent her former tutor a photographic portrait of herself. The soulful picture, signed ‘Olga 1914’, was the last communication the devoted tutor received from any of his former pupils. In July 1918 the family of Nicholas II were brutally murdered by a Bolshevik firing squad in the basement of the Ipatiev House in Ekaterinburg.

After his return to England in 1914, John Epps took particular pains to preserve his Imperial mementoes. Over nine years — between 1905 and 1914 — he collected every letter, card and drawing he received from the ill-fated children. About 30 of his papers were discovered more than a decade ago at Maggs Bros. Ltd., an antiquarian book dealer in London, England. They had lain untouched at the bottom of a tin document drawer for nearly 70 years.

The lives of the four daughters of Emperor Nicholas II and Empress Alexandra Feodorovna have been carefully preserved through the post-Revolution memoirs of Pierre Gilliard, Sydney Gibbs, Margaretta Eagar and Anna Vyrubova. These names recorded for posterity tell the story of their lives and their influence on the Imperial children. Of John Epps, however, there was no mention. He had been totally lost to history. Until now.

Janet Epps - an Australian descendant of the tutor - and Dr. Gabriella Lang tell the story of John Epps, who arrived in Russia in 1880 to take up a post in an English school. From 1900, he was employed as a teacher at the Imperial Lyceum in Tsarskoye Selo.

It was not until 1905, however, that he was offered the position of tutor to the four daughters of Russia's last tsar. On Monday April 25th, 1905, John Epps arrived at the Alexander Palace where he was met by Princess Sonia Orbeliani - the Tsarina’s lady-in-waiting who took him to schoolroom, where he encountered “a tall, slender woman.” He describes this meeting: “Have I the honour of speaking to the Tsarina?” he asked hesitantly. “Yes, you do,” she replied. His new August employer smiled and did her best to make him at ease.

Many of John Epps’ observations of the grand duchesses are now preserved in the pages of this charming book. To John Epps, they had not been historical figures but real people with whom he had a relationship and these historical documents were tangible proof of that.

The highlight of the book are the reproductions of the letters, cards and drawings created by the grand duchesses for their beloved tutor, and published for the first time in The Forgotten Tutor. These childish drawings and sketches - so lovingly prepared and just as lovingly collected and carefully preserved - coupled with Epps' impressions of life in the Alexander Palace, tell of a different age, a magical world that ended so brutally. The stage is now set for John Epps' story to be told, for acknowledgement of his contribution to the rich tapestry of the Romanov saga and - most importantly - to finally bring these poignant personal mementoes of the last tsar and his family into the public arena.

The Forgotten Tutor: John Epps and the Romanovs is the 25th title published by Gilbert's Books - the publishing division of Royal Russia - since 1994.

Book Launch of Fr. Peter Heers' "The Ecclesiological Renovation of Vatican II: An Orthodox Examination of Rome’s Ecumenical Theology Regarding Baptism and the Church"

Book Launch of Fr. Peter Heers' "The Ecclesiological Renovation of Vatican II: An Orthodox Examination of Rome’s Ecumenical Theology Regarding Baptism and the Church"
"The book which we present today is very important and must be read both by theologians and the wider public. However, most especially it must be read by Bishops, and in particular those who are involved with theological and inter-Christian issues and with the theological and inter-Christian dialogues."—Metropolitan Hierotheos (Vlachos) of Nafpaktos and Agios Vlassios New Book: Ecumenism: Origins, Expectations, Disenchantment: The Proceedings of a Pan-Orthodox Conference, Available From Uncut Mountain Press
For nearly 100 years the contemporary movement for the unification of Christianity has enjoyed the involvement of the Orthodox. Yet, despite the objections of many Orthodox Christians, the divisions among them which have developed on account of this participation, and the apparent lack of real progress toward the desired goal, there has never been a critical Pan-Orthodox examination of the phenomenon and Orthodox participation in it. This historic conference, sponsored by the School of Pastoral Theology of the University of Thessaloniki and the Society of Orthodox Studies, promises to fill this gap.
Comments

Biserka Brito1/13/2019 8:50 am
Kindly request for information on how and where i can purchase the book The Forgotten Tuttor: John Epps and the Romanovs

Biserka Brito1/13/2019 8:45 am
We must thank Almighty God who gifted with an epiphany professor John Epps to collect and guard such treasured mementos of his Royal pupils for posterity in the day made known to todays world.
I will definitely look to acquire this precious book.
×