Sermon on the New Martyrs and Confessors of Russia 2016

Source: Hermitage of the Holy Cross 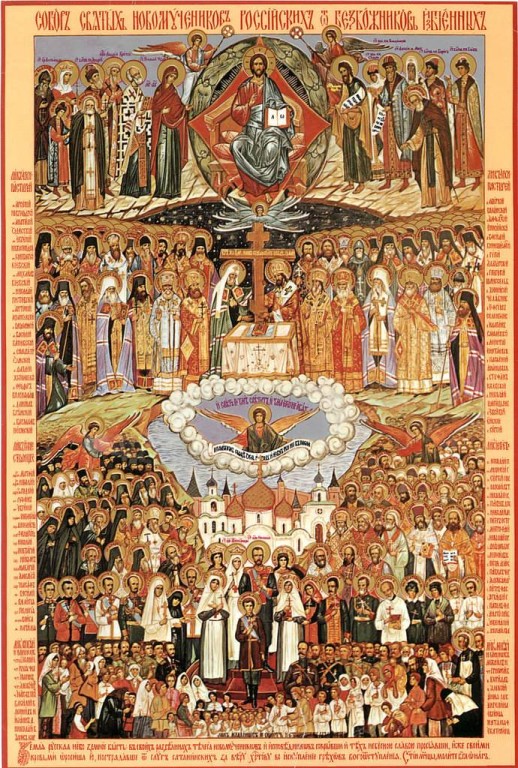 Today we celebrate the memory of the Holy New Martyrs and Confessors of the Russian land. These are all the multitude of bishops, priests, monks, nuns, laymen, laywomen, and children who were killed or suffered gravely because of their faith and their refusal to compromise their faith, to cooperate with the new revolutionary government, or to renounce their faith in Christ.

The experience of each and every one of these martyrs and confessors was unique. Even if their manner of death or suffering was similar in many cases, each of them brought with them to that moment of confession or martyrdom a unique soul, a unique set of experiences and circumstances. If we were to enter into the mind and heart of each one of these saints and observe the unique way in which they experienced their suffering and the knowledge of their coming martyrdom, we would see a wondrous tapestry of experience. And the thread which holds all this tapestry together is love, love for Christ.

Bishops of this time faced a particularly complex assortment of temptations. Events were changing quickly from the time the revolution began. The revolution itself was disorganized and chaotic, with different revolutionary leaders taking power in various places and turning on each other when disagreements arose. Having lived until now under the God-anointed Orthodox Tsar, the bishops found themselves without the security of the support of the government almost overnight. And almost immediately the demands began to be issued from the revolutionaries: “You must turn over all the precious vessels and metalwork belonging to the church for the benefit of the poor and starving. You will cease to use the church building because it will be commandeered by the People and used for other purposes.” In many cases if the hierarchs even hesitated or sought a compromise, they were killed immediately. Even though many of them remained apolitical in their outward expression and accepted the abdication of the Tsar and the coming revolution as a form of chastisement from God for the apostasy of the people, the very fact of their existence was so distasteful to the God-hating new regime that they could not escape the accusation of “counter-revolutionary activity.” And for this they could be killed quickly, imprisoned, or sent into exile, depending on the will of God and the particular character of the local authorities. Many were offered a compromise – the proposal that they join in the formation of the “Living Church” schism, a pseudo-religious body that would be completely under the control of the authorities. Church life was extremely confusing, with large parts of the hierarchy disappearing through martyrdom or incarceration. Many of the remaining bishops did not know to whom they should answer or with whom to associate. Nothing was easy, the pressures on the hierarchs were enormous, and how they responded under these pressures put all their virtues and weaknesses on display. Their interior life was the only foundation on which they could build their strong fortress against all the overwhelming demands of this chaotic time. In a beautiful paradox, many of the hierarchs who were sent into exile or into the gulags flourished spiritually there. Some of them, who were preoccupied with many administrative affairs during their active lives as bishops, suddenly had the opportunity to live like recluses in fasting and prayer and manual labor. Others, like St. Hilarion Troitsky, adapted well to the gulag and found in it a perfect field in which to sow all the seeds of virtue and fulfill all the commandments of Christ. Every day they would be humiliated (for the sake of Christ). They could live without the threat of vainglory, in poverty, free from the rich banquets they were compelled to enjoy in past years. They could learn to love, as Christ did, unconditionally, the representatives of the worst elements of society with which they shared living quarters, meals, and work assignments in the gulag. These expressions of Christ-like sanctity are as important to note as are the heroic martyrdoms which are countless in number.

Priests found themselves in similar confusing circumstances, but were also dealing with sudden turbulence in parish life which either distracted them from their traditional work or focused their minds completely in a way they had never experienced in peaceful times. They had their families to consider, and this made their temptations agonizingly harsh. They were also offered compromises, and threatened with extermination.

Monks and nuns were, in many cases, liquidated from their monasteries. In some cases they were allowed to continue to work on their monastic territories as farmers or laborers, but with the heart of the monastic ritual torn away as they were not allowed to continue the daily cycle of services or live in the heretofore undisturbed tranquility of the monastic schedule in their large and well-appointed monasteries. Some, like the nuns of many Moscow convents, were left alone in their buildings to starve and die, the priests being taken from them, and with no one to provide their daily bread. Others were sent to work camps and given the command to work for the good of the new regime. Some complied and continued to pray as they could, confused, and others simply refused and were killed for it. Many found themselves suffering in an exile which did not offer the consolations of community life.

Laypeople also suffered. Some were devoutly Orthodox but part of the intelligentsia, and thus a threat to the crude and crafty revolutionaries. Their continued presence in society, together with their commentary and criticism, was unacceptable to the persecutors. Their status as laypersons did not exempt them from the threat of martyrdom, torture, or the brutal conditions of incarceration.

And so we return to the thread which binds together all these multitudes of martyrs and confessors who suffered after the revolutionary events of 1917-1918 in Russia. Only their love for Christ could guide them, guard their souls from the fear of persecution and death, and drive them onward to their confession of faith. Fear or eternal punishments is one force which is present in the heart of every true Christian, but it is not the greatest force which exists in the human soul. A Divine longing, a heavenly desire, a spiritual love affair with our Lord Jesus Christ is the most powerful force, and if this love is present, fear is not necessary – perfect love casts out fear. If we want to acquire all the virtues of the new martyrs and confessors of Russia – courage, faith, humility, fearlessness – then let us truly draw near to Christ and give Him all our love and devotion. Amen. A Prophetic New Martyr: St. Seraphim (Chichagov)
Bishop Tikhon (Shevkunov) of Egorievsk
Today we commemorate a nearly unknown yet great saint, Holy Hieromartyr Seraphim (Chichagov) of Petrograd. He received a brilliant education, graduated from the Page Corps, became a well-known scholar, received a humanitarian as well as a natural sciences education, and was part of the upper echelons of society. He had a brilliant military career, having fought in several wars, but he left all this and became a priest. He did more than anyone else for the canonization of St. Seraphim of Sarov. Holy Hieromartyr Seraphim was not only a priest (later a bishop)—he was a true prophet. Archpriest Nicholai Stelletsky, New Martyr of Kharkov
Stanislav Minakov
Alas, Russian society did not heed the remarkable clairvoyance and warning of Fr. Nicholai (and not only of him), and therefore underwent the onerous punishments of the twentieth century.
Comments
×