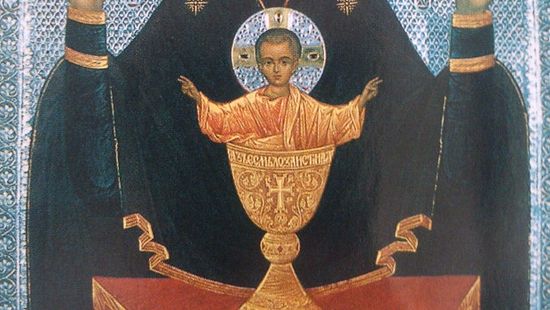 One hears often the retort to the good uneasiness cultivated by some Orthodox re: the "pan-heresy" of ecumenism (an ecclesiological-theological denial of the oneness of the Church and this being the Orthodox Church) that "it will never happen," that "there is no way we are ever going to enter into communion with Rome," etc. This kind of mollification is meant to put us at ease and focus on the union in the common cup as the only real concern.

However, neither now nor for the past 30+ years has the issue of communion been at stake and, in fact, it is currently irrelevant. Even if we never enter into communion with any heterodox it is still possible for a heretical ecclesiology to be adopted. Here is one way to understand what is happening and how the enemy is preparing for the acceptance of a heretical ecclesiology and thus a false union. Here is how I explain it to some of my parishioners: right now the ecumenists mindset would have us believe that we are betrothed to Papal Protestantism, I.e. Catholicism. So you hear them say that we have the same faith but unfortunately we cannot commune together. The next step is to recognize, in council, that we are both "church", although perhaps one more than the other (depending on the perspective). This would be equivalent to marriage, i.e. a recognition of mysteries and ecclesiality. This is what the document “Relations of the Orthodox Church with the Rest of the Christian World” essentially does, although hesitantly and with double speak. Once the marriage is celebrated, it is a matter of time until the couple will retreat to its inner chamber and consummate. That is the common cup. Whether that comes slowly or quickly or not all, it matters little, for the marriage is the key which ends the separation. Don't get fixated on the consummation. The recognition of mysteries and "ecclesiality" is everything. Ecumenism and the Ecclesiology of Saint Cyprian of Carthage
Fr. Daniel Degyansky
Saint Cyprian of Carthage developed with fearless consistency a doctrine of the complete absence of Grace in every sect which had separated itself from the True Church. His doctrine is one of the basic foundation blocks of Orthodox ecclesiology and it stands in direct opposition to the presuppositions of the ecumenical movement. Moreover, his warnings about the enemies of the Church have traditionally guided Orthodox in their response to those outside Her fold.
Comments

Isidora11/30/2017 4:20 am
This site does not record ratings correctly. These are excellent observations by Fr Peter and I rated the article 10. The rating this evening shows 1 vote, me apparently, and a rating of 1.
×