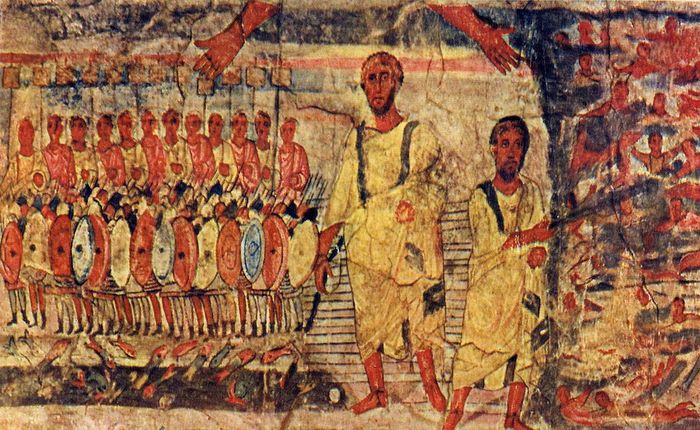 When we take up the life in Christ, we find before us a certain land, for the Kingdom of God is within us, as the Lord Jesus promises to the faithful. Illumined by the Holy Spirit at baptism, Orthodox Christians are called to possess this land by freely undertaking a multitude of struggles by which we become, through God’s grace, “children of the Light” and “heirs of eternal good things” (from the baptismal service).

These labors follow our choice to pursue the way of the Lord. In the baptismal liturgy they are described as “putting away the old man, corrupt through the lusts of the flesh” and “being clothed upon with the new man after the image of the Lord.”

Clothed upon with the new man refers to the effort required to possess the Kingdom. In this passage of Deuteronomy, Moses indicates what is involved in this process: a long purifying journey, persistent efforts to meet the demands of daily life fruitfully in the Spirit, and an unremitting pursuit of the goal that God sets before us. Ancient Israel’s experience in the wilderness serves as a type to illumine our own growth as disciples.

Although Israel initially disobeyed God by remaining at Kadesh Barnea, the people eventually journeyed east from the Red Sea to the Gulf of Aqaba and the settlements of Elath and Ezion Geber (vss. 1, 8). This “journeying” turned into thirty-eight years of nomadic existence (vs. 14), during which they survived on manna (see Ex 16:35), surplus from their flocks, and perhaps a little produce from campsite gardens (Dt 2:7). They skirted the mountains of Seir, home of the Edomites (Dt 2:4-5), but stayed in the wilderness and made no permanent settlements.

This harsh nomadic existence serves to purify and toughen Israel. The generation that balked at entering the Promised Land from Kadesh Barnea finally reposes (vss. 14-16). Now the younger generation – those who were children at the time of Israel’s initial failure at freedom – matures through a rigorous life in the wilderness. God slowly hones them into an adaptable force ready to possess the Promised Land at His direction.

For Orthodox Christians the life in Christ is truly nomadic, for God is preparing us through our daily efforts for a great inner conquest. Others in our neighborhood, workplace, and community may appear settled, like the Edomites and Moabites. Yet through the struggle in the wilderness Israel learned to rely solely upon God, instead of the comforts of a fixed life. So we too must learn to struggle.

At the end of the thirty-eight years, with the process completed, the Lord commands His people to go along the desert road toward Moab (vs. 8). Just as they have avoided Edomite territory all those years, now they are to respect Moabite territory; they are not at enmity with them, nor are they to wage war with them (vs. 9). As nomads, the people of God buy provisions from others (vs. 6), but they – and we – are on a higher journey. We must avoid becoming entangled here in this world and diverted from the true land within.

Moses reminds Israel in verses 10-23 that various other peoples in this region had dispossessed enemies, including “a people great and numerous and stronger than you” (vs. 21). He also reminds us, as God’s people, that we will face many enemies in this life – but if we struggle in Christ, we shall gain our possession and become victors!

"O Christ our God, keep us ever warriors invincible in every attack of those who assail us, and make us all victors even unto the end, through Thy crown incorruptible" – Chrismation prayer History Through New Eyes
Seraphim Hamilton
It is time that we see the world through new eyes. Neither God nor His people have sat on the sidelines of history. They both are at the center of history, the goal of which is the birth of Jesus Christ and the divinization of all mankind. Sunspots in Scripture
Fr. Patrick Henry Reardon
The account of Ananias and Sapphira is arguably the most frightening story in the New Testament.

Theophany Miracles in the Holy Land
"The Jordan was turned back"
Larisa Kaliuzhnaya
“A miracle will definitely happen to each one of you in this Land—after all, you have stepped foot upon the extraordinary, Holy Land. Believe me—I have lead tour groups here for five years now. You only have to be able to see these miracles.
Comments
×