The Declaration of the Pope and the Patriarch Leaves Mixed Feelings

On February 12, 2016, in the Jose Marti International Airport in Havana, a meeting took place between His Holiness Patriarch Kirill of Moscow and All Russia and with Pope Francis of Rome. The meeting concluded with the mutual acceptance of a declaration by Pope Francis and Patriarch Kirill. 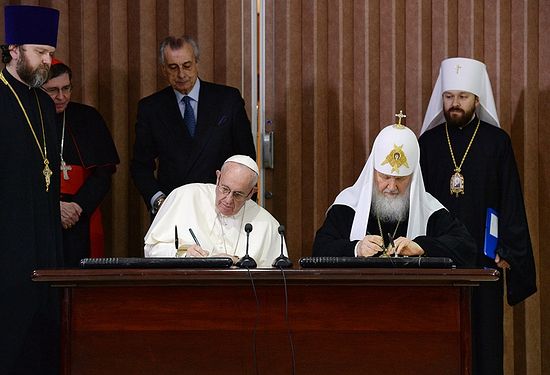 The joint declaration signed by the Pope and the Patriarch leaves one with mixed feelings. On the one hand, one is glad that they raised their voices in defense of the persecuted Christians of Syria and Iraq, called for peace in the Ukraine and restoration of Europe’s Christian roots, and came out in defense of the family and the right to life of all people, especially infants.

On the other hand, there are a whole series of formulations in this document that evoke well-founded anxiety. It’s understandable that the document was written in so-called conventional language, in the language of theological diplomacy. As the Byzantines would say, it was written on water. There are it in a whole series of contradictory and mutually exclusive formulations.

Let’s begin with the beginning. “We share the same spiritual Tradition of the first millennium of Christianity. The witnesses of this Tradition are the Most Holy Mother of God, the Virgin Mary, and the saints we venerate.” Unfortunately, we are compelled to state that already in the sixth century, various contradictions and faults began to grow in the Western tradition, which in the end led to the catastrophe of 1054 and the departure of the Latins from the bosom of the Universal Church. Certain Catholic theologians, such as Martin Julie, consider that Emperor Justinian was responsible for the schism. In general, after the Council of 879, which some theologians call the Eighth Ecumenical Council, serious communion between the West and the East no longer existed. Incidentally, this council condemned the filioque, which was nevertheless victoriously confirmed in the West in 1014. Despite this fact, we have point five: “We have been divided by wounds caused by old and recent conflicts, by differences inherited from our ancestors, in the understanding and expression of our faith in God, one in three Persons—Father, Son and Holy Spirit.”

Of course, we have to give the creators of the declaration credit for their sobriety in not masking the real differences and not presenting what they desire as if it were fact, but honestly talking about the differences and separation, and that they said there is a difference in our understanding. Here we are talking about the most important thing—the dogma of the Trinity. “We have been divided by wounds caused by old and recent conflicts, by differences inherited from our ancestors, in the understanding and expression of our faith in God, one in three Persons—Father, Son and Holy Spirit.” Then, forgive me, but what common tradition are we talking about? Especially since our separation from the Catholics is by no means limited to the filioque. There is the matter of purgatory, the Immaculate Conception, the bodily assumption of the Virgin Mary into heaven, and the matter of mystics and ascetics. But in the second millennium A.D., in the West such a tradition came together in the West as distorted at the root all traces of the first millennium of Latin tradition. I am sure that if St. John Cassian were to have met Francis of Assisi or Teresa of Avila he would not have recognized either of them as Christians. There is an obvious tendency to minimize the problem, although the different understanding is honestly mentioned.

Further. Nevertheless, regardless of the differences in understanding of the Holy Trinity, at the very beginning of the document there is the triumphant testimony: “By God the Father’s will, from which all gifts come, in the name of our Lord Jesus Christ, and with the help of the Holy Spirit Consolator, we, Pope Francis and Kirill, Patriarch of Moscow and All Russia, have met today in Havana. We give thanks to God, glorified in the Trinity, for this meeting, the first in history.”

The question arises as to how we give thanks. Through common prayer? There is a much stronger precept in this call! Particularly, when at the beginning of the document it is written: The grace of the Lord Jesus Christ and the love of God the Father and the fellowship of the holy Spirit be with all of you (2 Cor. 13:13). There is a stronger precept in speaking of common prayer.

Further. If we must overcome the multitudinous obstacles related to the very essence of our faith, what common witness to the Christian Faith will in fact be possible? To what can we witness if we believe differently, if we are talking about different ideas? “We call upon Christians of Eastern and Western Europe to unite in their shared witness to Christ and the Gospel, so that Europe may preserve its soul, shaped by two thousand years of Christian tradition.” How and about what do we witness? Perhaps we first need to work on ourselves and the essence of our faith?

Of course, we are happy to hear the call to exclude any forms of proselytizing—from which the Orthodox world suffers more than the Catholics. However, this call has been repeated many times before, but for certain people it goes in one ear and out the other. 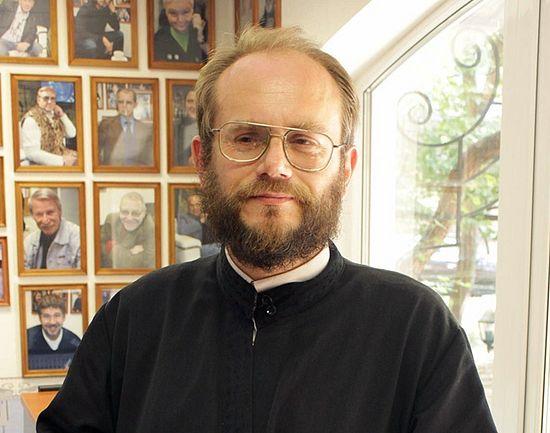 The 25th point is quite worrying: “It is our hope that our meeting may also contribute to reconciliation wherever tensions exist between Greek Catholics and Orthodox. It is today clear that the past method of “uniatism”, understood as the union of one community to the other, separating it from its Church, is not the way to re–establish unity. Nonetheless, the ecclesial communities which emerged in these historical circumstances have the right to exist and to undertake all that is necessary to meet the spiritual needs of their faithful, while seeking to live in peace with their neighbors. Orthodox and Greek Catholics are in need of reconciliation and of mutually acceptable forms of co–existence.” In other words, Ukrainian uniatism, which appeared as the result of the Brest banditry, is declared law, with the right to full restoration of it sphere of influence—in fact more than lawful.

In the document is expressed the hope that the schism in the Church will be overcome based upon existing canonical norms. But the question—who are the judges and what are the norms? Will we be considering that the Brest or Lvov councils were lawful? Roman imperialism in the East has never been lawful from the beginning because the Roman Pope is no more than the Patriarch of the West, in accordance with ancient canons. From the point of view of the norms of the first millennium, Catholics have no business whatsoever being in the Ukraine. But nevertheless, however vague in form, the document presents the thought of their lawfully being there. And essentially, this document is a step backward in our ecclesiastical diplomacy.

The 26th point is sufficiently confusing. “We invite all the parts involved in the conflict to prudence, to social solidarity and to action aimed at constructing peace. We invite our Churches in Ukraine to work towards social harmony, to refrain from taking part in the confrontation, and to not support any further development of the conflict.” All seemingly well and true in essence. But the question arises as to what are we to consider “supporting any further development in the conflict”? If, for example, an Orthodox priest ministers to separatist forces in Donetsk and supports people who are defending their homes and families from “Right Sector” murderers, could this be considered support of the conflict? Unfortunately, the guilty parties in the Ukrainian conflict are not indicated here; meanwhile the Western Ukraine and its Uniate structure made a significant contribution to this conflict.

Also rather worrying are the sections dedicated to family and bioethics [19-21]—especially: “The emergence of so-called euthanasia leads elderly people and the disabled to begin to feel that they are a burden on their families and on society in general.” This point looks not only too soft, but also too ambiguous. Instead of declaring euthanasia the murder of the elderly, moreover a base murder because those for whom we are obligated to show love and respect become the victims of egoism by relatives who consider them an unbearable burden and therefore kill them, this section vaguely, according the principle of the “Overton Window”,[1] talks about a sort of lawfulness of euthanasia instead of condemning it as murder of the helpless and of those whom we should be helping. Instead of this, it states that “the elderly people and disabled … feel that they are a burden…” and that, perhaps they are in fact a burden? This section looks unsatisfactory.

Section 20 is ambiguous in the extreme. “We regret that other forms of cohabitation have been placed on the same level as this union, while the concept, consecrated in the biblical tradition, of paternity and maternity as the distinct vocation of man and woman in marriage is being banished from the public conscience.” This section contains no condemnation of abominable sexual perversions—homosexuality, lesbianism, same-sex “marriages”, etc. It deceptively talks only about other forms of male-female cohabitation without registration, and not about those abominations due to which the Lord sent down fire and brimstone on Sodom and Gomorra. Understandably, this was edited at the behest of Pope Francis, who due to the heavy pressure on him could not openly condemn homosexuality. Here again we see the “Overton Window” principle at work, and namely abomination and perversion is now accepted as no more than another form of cohabitation. Later thoughts will be introduced as to the permissibility, and then the lawfulness of depravity. From the point of view of tradition of the first millennium, such utterances are nonsense and heresy, because all the fathers of the first millennium testified that homosexuality and lesbianism are abominations before God and deserve the severest punishment by Church and state. Then the question again arises: What common testimony within the framework of the tradition of the first millennium could we be talking about?

In this case, I view this meeting as our defeat. God knows the reasons why His Holiness Patriarch Kirill decided to make this trip. Perhaps he had no choice. But in any case, this meeting was in many points unsatisfactory.

[1] The Overton window, also known as the window of discourse, is the range of ideas the public will accept... The term is derived from its originator, Joseph P. Overton (1960–2003), a former vice president of the Mackinac Center for Public Policy, who in his description of his window claimed that an idea's political viability depends mainly on whether it falls within the window, rather than on politicians' individual preferences. According to Overton's description, his window includes a range of policies considered politically acceptable in the current climate of public opinion, which a politician can recommend without being considered too extreme to gain or keep public office (Wikipedia).
See also