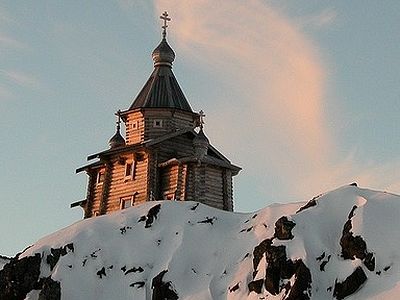 Patriarch Kirill of Moscow and All Russia on Wednesday served a Divine Liturgy at Russia’s Bellingshausen Antarctic station on Waterloo Island and raised a prayer for the entire world, reports the TASS news service.

"Here, at the top of the world … when I blessed water in Antarctica today I was thinking about the entire planet below and prayed for God’s creation," he said after the service which took place in the small wooden Holy Trinity Church, the only active Orthodox church in Antarctica.

"There are such places in the world that require no words as the very site has a special spiritual energeties. And these spiritual energeties are especially felt during prayer. This is such a place. Maybe because people here are working in a very harsh environment, or maybe because they raise sincere prayers in this church, because they have strong faith," the patriarch said.

The patriarch presented an icon of St. Prince Vladimir, the Baptizer of Rus, as a gift to the church.

The Church service was attended by Russian polar explorers and invited members of expeditions of other countries, including Chile.

As TASS reports, in a meeting with polar explorers the patrarich also stated that the Antarctic is a model of an ideal humankind, with no weapons, no wars and people of different nations selflessly helping each other:

"Antarctic is the only place on Earth where there are no weapons, no wars, no development of mass destruction weapons… it is a kind of a model of an ideal humankind and an example that people can live that way - with no borders, no weapons, no hostile competition, that people can cooperate and feel like a family," he said at a meeting with polar explorers at the Bellingshausen station.

He said that regardless of their nationality or citizenship, polar explorers expend a helping hand to each other in a difficult moment thus presenting as example of cooperation.

He said it was quite logical that the only operating church in Antarctica, the Russian Orthodox church at the Bellingshausen station, is named after the Holy Trinity. "Trinity is an ideal model of unity," Patriarch Kirill said. "Looking at the Holy Trinity we can bridge the world’s gaps"

"It is good that Antarctica has a church where polar explorers can step over division lines. Antarctica is a place of special spiritual and humanitarian significance for the entire world. Thank you for the example you are setting to the world," he said.

"The night before the patriarch arrived in Punta Arenas from Asuncion (Paraguay) to depart for Antarctica today at the invitation of Russian polar explorers. There he will serve the first Divine Liturgy in the only permanent cathedral in Antarctica - the Orthodox Holy Trinity Church at Russia’s Bellingshausen Station on Waterloo Island," the patriarch’s spokesman Father Alexander Volkov said. "This is a historic event in the life of Russian Orthodoxy indicating that Russian Orthodox Church adherents worship on all continents." Southernmost Church in the World: Where Father Kirilov Celebrates Mass at 25 Degrees Below Zero

Southernmost Church in the World: Where Father Kirilov Celebrates Mass at 25 Degrees Below Zero
The Russian priest is one of a hundred people who spend even the winter in this latitude, although the temperatures can reach minus 25 degrees centigrade. In the summer the average temperature rises only slightly above the zero-degree mark. The island is 95 kilometers long and at its widest point 25 kilometers wide. Overall, it accounts for an area of 1150 square kilometers, in which, after all, 500 people stay there in the summer. The majority lives in the Incorporated in a Chilean settlement Villa Las Estrellas (Star Village). In winter there are all of the 50 people. Do We Really Need a Church in Antarctica?
Priest Constantine Kravtsov, Hieromonk Pavel (Gelyastanov)
What do we know about the sixth continent other than that it is the abode of penguins and polar explorers, and that endless icebergs move around its shores? The traveller who finds himself, not even on the continent, but at its threshold on one of its islands, feels like he’s on another planet.
Comments
×