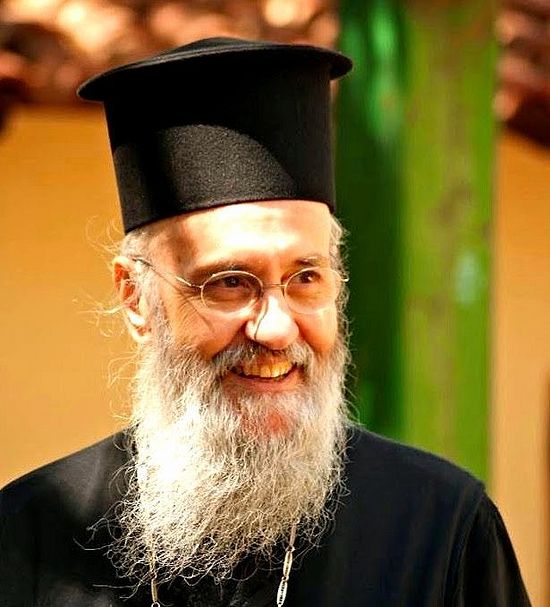 Metropolitan Hierotheos (Vlachos) of Nafpaktou has written the Archbishop of Athens and the Holy Synod of the Church of Greece concerning the process by which the texts for consideration at the Great and Holy Synod (planned for June of 2016) are to be approved.

The Metropolitan brings to light serious violations and disregard for the synodical system of the Church with regard to the acceptance of the pre-synodical texts. He requests that answers be given as to why the hierarchy of the Church never discussed, let alone approved, the documents which will be considered at the Holy and Great Council.

Given the non-participation of the hierarchy, and in light of the closing statement (§22) in the text "Relations of the Orthodox Church with the rest of the Christian world," he asks the troubling question:

"If decrees are made by the Holy and Great Synod of the Orthodox Church, which the hierarchs, monks and theologians ignore, and which are contradictory to the Patristic vision, will they be held responsible and subject to judgement and condemnation if they refuse to implement them?"

Your Beatitude, President of the Synod,

The Synaxis of the Primates of the Orthodox Churches (March 6-9, 2014) decided to set up a Special Inter-Orthodox Commission, consisting of one bishop and one advisor from each autocephalous Church. This Commission would, among other things, review the texts: The Orthodox Church and the Ecumenical Movement; Relations of the Orthodox Church with the rest of the Christian world and The Contribution of the Orthodox Church to the promotion of Peace, Justice and Love between peoples and the eradication of racial and other forms of discrimination. This work was to begin in September 2014 and to finish by Holy Pascha in the year 2015.

Because each Autocephalous Church will “give one voice,” that is one vote, at the Holy and Great Council of the Orthodox Church, I was left with the impression that the reviewing of the texts was to be done by the representatives of our Church, who would receive instructions and guidance from the Holy Synod of the Church.

However, I was recently informed that the texts on these subjects were completed by the Special Inter-Orthodox Commission and were already submitted to the Holy and Great Synod, without the knowledge of the Hierarchy of our Church, and I do not know if they were seen by the Permanent Holy Synod.

I respectfully point out that H.E. Metropolitan Jeremiah of Switzerland, Secretary of Preparations for the Holy and Great Council, presented Your Beatitude, the draft texts On the Mission of the Orthodox Church as a witness of love in service and On the importance of fasting and its observance today and submitted the request that you, before the end of July (2015), send "any comments and suggestions of your most holy Church on the formation of the dossier and its submission to forthcoming, amended Fifth Pre-conciliar Pan-Orthodox Meeting, which will approve and submit them to the Holy and Great Synod in their final form.” However, from what we were informed at the Synod, the Sacred Synod did not send its observations.

As a member of the Permanent Holy Synod, I requested in December of 2015 that we be given the text, which they gave us in January of 2016. I thereafter studied the completed texts in conjunction with the texts drawn up [previously] by the four Pre-conciliar Pan-Orthodox Meetings and found that there were differences, due to the revisions and merging of the texts.

This gives rise to different questions:

The questions I pose are serious and need answers, which must be sent to all the Hierarchs of our Church, because the present Permanent Synod is not able to take on such a great responsibility.

This is particularly important because at one point it was written: “The Orthodox Church believes that any attempts to shatter Church unity, undertaken by individuals or groups under the pretence of preserving or defending true Orthodoxy, must be condemned” (Relationship of the Orthodox Church with the rest of the Christian world §22). In other words, if decrees are made by the Holy and Great Synod of the Orthodox Church, which the hierarchs, monks and theologians ignore, and which are contradictory to the Patristic vision, they will be held responsible and subject to judgement and condemnation if they refuse to implement them?

Submitting this for the consideration of Your Beatitude and the Eminent Hierarchs, I remain,

Least among the brethren in Christ,

+ Hierotheos of Nafpaktos and Saint Vlasios ANNOUNCEMENT: Theological-Academic Conference on the Pan-Orthodox Council
Sponsored by the Dioceses of Glyfadas, Gortinos, Kithyron, Peireaus and the Synaxis of Clergy and Monastics, a conference addressing the upcoming Pan-Orthodox Council on the island of Crete in June will be held on Wednesday, March 23rd, 9 am - 9 pm in the "Melina Merkouri" Hall of the "Peace and Friendship" Stadium, in Peireaus, Greece.

Paok2/23/2016 6:59 pm
Does anyone know whether Metropolitan Hierotheos received a response yet? I do not expect that they will even respond to this God fearing hierarch's concerns. The people of Christ's church should demand that they respond and that they start to behave in a manner consistent with that of past councils and the bishops that participated in them. We should demand that they stop having their secret meetings, which is consistent with the lodges, and organizations they belong to, but not the holy Church of Christ.
Our lord Jesus Christ said “nothing in secret” John18:20 and he also clearly warned that what we speak in secret shall be “proclaimed upon the housetops” Luke 12:3. Do they really think that they will get away with a foolish attempt in usurping the role and work of the Holy Spirit who guides and works in His church and His chosen vessels organically? Do they really think that they can thwart God’s work through their treachery, pride and deceit? What foolishness!

The kings of the earth set themselves, and the rulers take counsel together, against the Lord and against His Anointed, saying,
“Let us break Their bonds asunder, and cast away Their cords from us.”
He that sitteth in the heavens shall laugh; the Lord shall hold them in derision. Psalm2:2-4