Biblical Roots of the Jesus Prayer 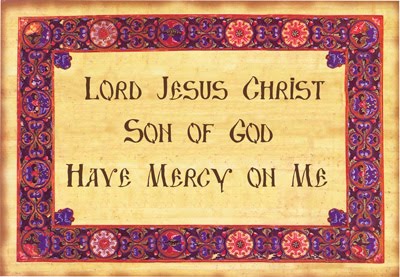 It is remarkable to me how deeply biblical the Jesus Prayer is:

“Lord Jesus Christ, Son of God, have mercy on me, the sinner.”

The emphasis on the Holy Name of the Lord is a thoroughly biblical emphasis. For example, at the Tower of Babel, we are told that God divided both the language and the lip of the people. That is, he broke their unity by creating diverse forms of polytheistic religion. If there are many false religions rather than a single, united false religion, the wicked cannot unite. That “lip” refers to religious confession is evident in the way the Psalms use it: David only takes the name of Yahweh on his “lip.” Zephaniah predicts that one day, the Gentiles will worship with a true “lip” and Isaiah says the same of Egypt in the eschaton.

This is related to the concept of “calling on the name of the Lord.” When Abraham comes out of Mesopotamia, he is told that God will make him a great “Name” just as the builders of Babel wished to “make a name for themselves.” In response, Abraham builds altars and begins to “call upon the name of the Lord.” Note that emphasis on the “Name” of the Lord. That emphasis will develop and grow throughout the Scriptures. In Exodus 6, we are told that the patriarchs did not know God by “Yahweh” but by “El Shaddai.” Why? Because a Name discloses the most fundamental aspect of who a person is. Yahweh is the Name of the one who is faithful to His promises: God promised in Genesis, but He faithfully enacted those promises in Exodus.

In Exodus 34, God discloses the “Name” to Moses.

(Exodus 34:5-7) The Lord descended in the cloud and stood with him there, and proclaimed the name of the Lord. The Lord passed before him and proclaimed, “The Lord, the Lord, a God merciful and gracious, slow to anger, and abounding in steadfast love and faithfulness, keeping steadfast love for thousands, forgiving iniquity and transgression and sin, but who will by no means clear the guilty, visiting the iniquity of the fathers on the children and the children’s children, to the third and the fourth generation.”

This passage is alluded to again and again throughout the Scriptures. The disclosure of the Name of Yahweh is the disclosure of His most fundamental properties, or energies. Energies means activities, and everything God discloses about Himself is an activity. St. Dionysios says that all the processions of God are “goodnesses” so that the Lord tells Moses that He will “make all my goodness pass before you.” It is interesting that the word “proclaim the Name of the Lord” is related to the words “calling on the Name of the Lord.” God gives His Name to us, and we call back His Name to Him.

In the Gospel of John, it is revealed that Jesus is the supreme revelation of the Divine Name. Jesus has “come in His Father’s Name” (5:34) and indeed, He has “manifested [the Father’s] Name” (17:6). Exodus 3 says that Yahweh is the Name of Remembrance. That is, when you call out the Name of Yahweh, He will remember His covenant and act accordingly. In John, it is revealed that the Name of Remembrance in the New Covenant is “Jesus Christ.” Thus, the Savior tells us:

When you call out the Name of Jesus, God remembers His covenant and acts accordingly. All of the biblical freight about God revealing His Name and you calling it back to Him falls on the Holy Name of Jesus Christ. That is why St. Paul will say, concerning Jesus:

(Philippians 2:9-11) Therefore God has highly exalted him and bestowed on him the name that is above every name, so that at the name of Jesus every knee should bow, in heaven and on earth and under the earth, and every tongue confess that Jesus Christ is Lord, to the glory of God the Father.

This is actually an allusion to Isaiah 45:

(Isaiah 45:23-25) By myself I have sworn; from my mouth has gone out in righteousness a word that shall not return: ‘To me every knee shall bow, every tongue shall swear allegiance.’ “Only in the Lord, it shall be said of me, are righteousness and strength; to him shall come and be ashamed all who were incensed against him. In the Lord all the offspring of Israel shall be justified and shall glory.”

What is remarkable about “have mercy on me, the sinner” is that these themes appear precisely in the revelation of the Name of Yahweh in Exodus 34: God is “gracious and merciful.” Mercy (hesed) is a broader concept in the Old Testament than merely forgiveness. Rather, it signals God’s covenant faithfulness towards the Creation and towards His children. That is why, in our Divine Liturgy, we pray “Lord, have Mercy” in asking for the well-being of the whole creation: cities, man, crops. It is asking God to be faithful. Yet, forgiveness is part of the concept in Exodus 34. That is why God is said to “forgives iniquity and sin.” It is no coincidence that we, in the context of invoking the Holy Name of Jesus Christ, ask Him to act precisely in the manner His Name indicates: gracious, merciful, forgiving iniquities and sins. On Prayer of the Heart
Excerpts from Exploring the Inner Universe
Fr. Roman Braga
Attaining dispassion is not the result of personal effort, but it comes by the grace of God; so you must fall on your knees, see yourself as a sinner, and ask for God's help. Notes on the Jesus Prayer
Archpriest Artemy Vladimirov
We very much pity those Orthodox Christians who think that the best rest for their exhausted soul is to watch television news. This isn’t a bad thing, perhaps, but it’s a dead thing. You may spend all of the earthly time you have been allotted with such distractions, but you will never be at peace. If you want to calm your mind and ease your heart, try calling instead on the most holy name of Jesus Christ, without haste and with only one intent: to attract His attention and repent of your sins.
Comments

Walter Ferris10/19/2021 4:59 am
I was reading St. Mark 10:46-51 and it would seem that is where the prayer developed from. Bartimaeus is calling out, Jesus, Son of David, have mercy on me.” I haven’t found anything that references this, just that the prayer may have originated with the Early monks.
×